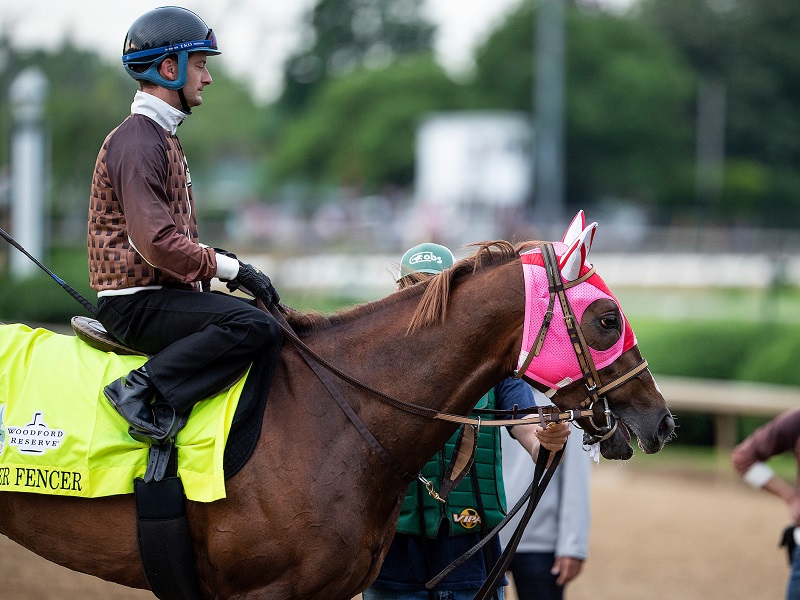 Jockey Julien Leparoux was scheduled to pilot the chestnut but a cancelled flight kept the French-born rider in Kentucky. Master Fencer's regular exercise rider Yosuke Kono was in the irons for Wednesday morning's breeze, which saw the horse appear to stumble slightly inside the eighth pole, causing Kono to pull the horse up shortly after the finish line.

Kono, via translator Mitsuoki Numamoto, said Master Fencer was working well up until the stumble and that the horse appears to be in good order after cooling out at the barn.

"Up until the eighth pole, he was breezing really well and I was so satisfied. All of a sudden, he stumbled, and gradually shifted to the left by the rail. I switched my whip to make him aware and focus to the end of the breeze," said Kono. "We then recovered but it was feeling a little weird so I tried to stop him as soon as possible.

"After the work he had a light jog and there were no problems. I don't think it's something that will cause a major issue."

Master Fencer was last of 19 at third call in the Grade 1 Kentucky Derby before launching a menacing bid up the rail to finish seventh, defeated just four lengths.

When Maximum Security was disqualified, Master Fencer was elevated to sixth besting the effort of the two previous Japanese-based horses in the Derby topping Lani [9th, 2016] and Ski Captain [14th, 1995].

Kono said that Master Fencer has flourished since the eye-catching Derby effort.

"After the Derby his appetite has been really good and he's been working really good," said Kono. "At the same time, his body is growing and changing. I felt his running stride has been getting longer than before which is a good sign for us, but maybe that was causing him a little trouble today."

Kono said that the additional two furlongs in the 'Test of the Champion' will benefit Master Fencer.

"He has a big heart and big lungs and is better suited to the longer distance," said Kono. "He is not the type to make crazy speed. He has a long, strong late kick. For him, the mile and a half will be a lot better."