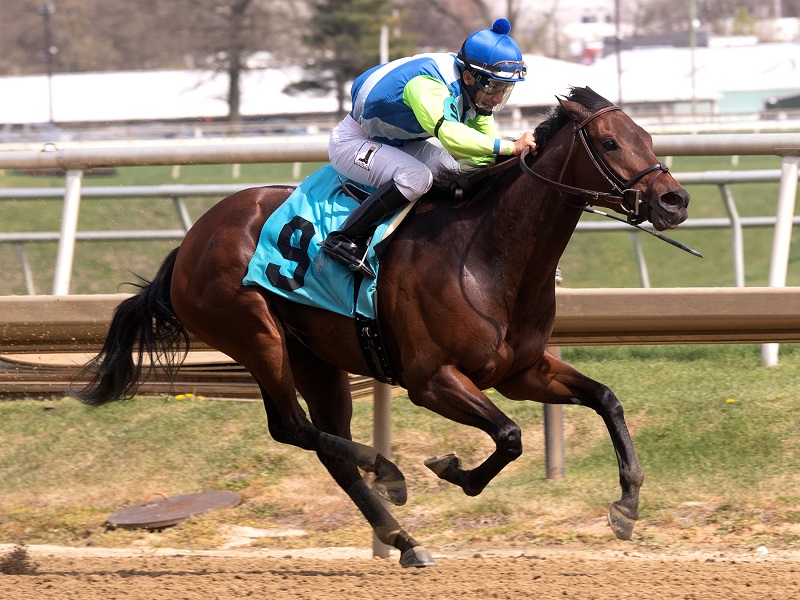 ELMONT, N.Y. - A salty field of seven older fillies and mares has assembled for the Grade 3, $250,000 Bed O' Roses Invitational on Friday at Belmont Park, led by Lael Stables' Chalon.

Since transferring to the barn of trainer Arnaud Delacour for her 2018 campaign, Chalon has been a model of consistency. In six starts under Delacour, all against stakes competition, the 5-year-old mare bred by J. K. and Linda Griggs has never finished outside the exacta and has picked up wins in a trio of listed stakes, including last out in the Skipat on May 17 at Pimlico in her 2019 debut.

Striving to break through at the graded stakes level, she nearly upset the field in last year's Grade 1 Breeders' Cup Filly & Mare Sprint at odds of 14-1. After tracking a hot pace, the daughter of Dialed In opened up a daylight lead in the stretch but was run down late by Shamrock Rose. The race was just the latest in a series of close calls for Chalon dating back to the 2017 Grade 2 TCA at Keeneland, which kicked off a string of five runner-up finishes in a row at the graded level.

Chalon will break from post 3 with Hall of Famer Javier Castellano aboard.

Another contender who has come close to victory in a graded stakes and looking to break through is John Kimmel-trainee Pacific Gale. Bred by Bally Breeders, the Flat Out filly won the Sorority as a juvenile but her development stagnated a bit in 2018 as it took her a few tries to clear the N2X level as a sophomore while her Beyer Speed Figures hovered in the 70's.

Over the winter, the Tobey Morton-owned filly showed improvement, starting with a third-place finish in the Grade 3 Sugar Swirl in December at Gulfstream Park. She continued her upward trajectory to start her 4-year-old campaign, posting a runner-up effort in the Grade 3 Fasig-Tipton Hurricane Bertie and also adding a trio of runner-up finishes at the graded level, including an encounter with Come Dancing in the Grade 3 Distaff Handicap at Aqueduct Racetrack and most recently a tough-luck second in the Grade 3 Vagrancy Handicap on May 11 at Belmont.

"She came out of her last race in good order and had a couple nice, easy breezes just to maintain fitness," Kimmel said. "If she had gotten clear a little bit sooner in the Vagrancy she could have won. It was a very fast track that day and she put in a good effort.

"She was a little disappointing last year because she was training just as well as she is now but didn't seem to be improving," Kimmel added. "The transition from 3 to 4 has worked wonders for her. She's certainly been on the upswing and her form is holding. Each race is getting better and better. I consider her one of the better fillies around."

With Joe Bravo named to ride, Pacific Gale will depart from post 4.

Multiple Grade 1-winner Separationofpowers will go out for trainer Chad Brown and Klaravich Stables. The lightly raced filly has only made eight starts since debuting in July 2017 but has made the most of them, winning the Grade 1 Spinaway at Saratoga Race Course as a juvenile and then taking the Grade 1 Test nearly a year later over the same track. Sent off as the 6-5 favorite in her 4-year-old debut in the Vagrancy, the Candy Ride filly pressed a moderate early pace and faded to finish third, 2 ¼ lengths behind Pacific Gale.

Bred by Northwest Farms, Separationofpowers will break from outermost post 7 with regular rider Jose Ortiz in the irons.

Dawn the Destroyer, a Stonestreet Stables homebred trained by Kiaran McLaughlin, will look to bounce back after a few disappointing efforts against Grade 3 company. The Speightstown mare turned heads with an emphatic 4 ¼-length score off a seven-month layoff on November 29 at Aqueduct, then for an encore took the Interborough on January 25 at the Big A. Like Pacific Gale and Separationofpowers, she exits the Vagrancy, in which she finished fourth.

"She was excellent at Aqueduct over the winter," said McLaughlin. "In her last two she ran into Come Dancing, who was a monster that day, and she may have run on a speed biased track last time. We're hopeful she gets back to her best form, but we'll see. It's a tough spot."

Dawn the Destroyer will enlist the services of Hall of Fame rider John Velazquez and the pair will break from post 5.

Going out for potent New York connections trainer Jason Servis and owners Michael Dubb, Monomoy Stables, The Elkstone Group and Bethlehem Stables, Mybigitalianfriend will try stakes company for the first time after a second-place finish against an optional claiming field on March 28 at Gulfstream. She will again enlist the services of Irad Ortiz, Jr. and the pair will leave from stall 2.

Saguaro Row and Spring in the Wind round out the field. The former, trained by Michael Stidham for Newtown Anner Stud, is 2-for-2 this year and coming off an optional claiming score at Belmont, while the latter exits a sixth-place finish in the Grade 1 Humana Distaff for trainer Anthony Quartarolo and Ron Paolucci Racing.