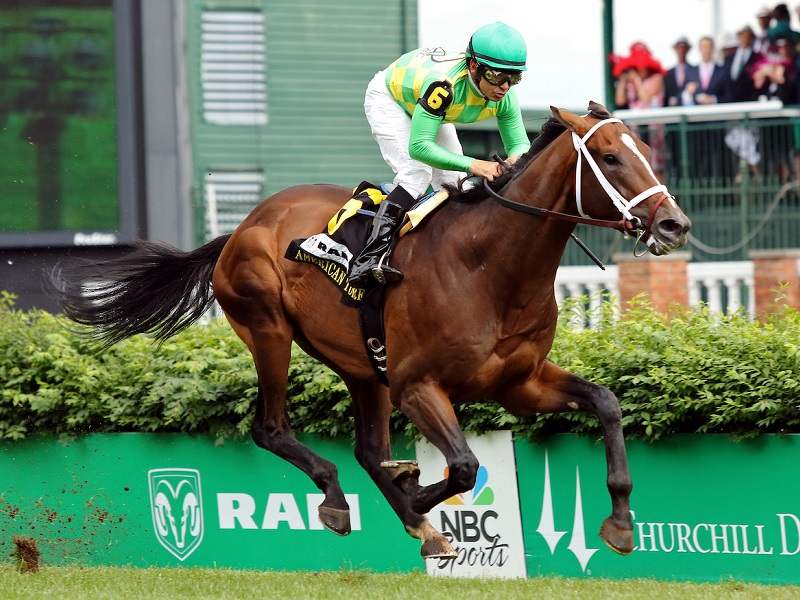 ELMONT, N.Y. - Donegal Racing, Joseph Bulger and Peter Coneway's two-time graded stakes winner Arklow has capably run long distances in his past starts, but will stretch out even further when he competes in the two-mile Grade 2, $400,000 Belmont Gold Cup Invitational over the Widener turf course Friday afternoon at Belmont Park.

Trained by Brad Cox, the 5-year-old bay son of Arch recorded a career best 105 Beyer Speed Figure last time out in the Grade 1 Man o' War, finishing only a neck behind Channel Maker.

"On paper, we think he's as good as the best there is in the country, but the mile and quarter is a little shorter than he would like so we decided to give the Belmont Gold Cup a whirl," said Donegal Racing's Jerry Crawford. "There's a little fear of the unknown in going this long but he's showing signs of being able to get the two miles and we know that he likes the turf at Belmont. The time off did him well and it sets up well if we decide to keep him in training throughout the year and early next year. We are incredibly grateful to NYRA for their great hospitality and racing that they will have this weekend."

Arklow will emerge from post 6 under regular rider Florent Geroux.

Canessar will seek redemption in the Belmont Gold Cup after finishing second beaten a length to Her Royal Highness' Call To Mind in last year's edition of the two mile turf marathon.

The Guy Pariente-owned gray or roan son of Kendargent will attempt to earn his first victory since his North American debut in the 2017 Laurel Turf Cup. Since then, he has raced exclusively against graded stakes company which include runner up efforts in the Belmont Gold Cup and the Grade 3 Stars and Stripes at Arlington last July. Last out, Canessar was sixth beaten 2 ¾ lengths in the Grade 2 Elkhorn at Keeneland behind Bigger Picture.

Trained by Arnaud Delacour, Canessar will break from post 9 under Joel Rosario.

Hall of Famer Bill Mott will saddle Trinity Farm's Red Knight, who is a stakes winner over the two-mile distance when he took the H. Allen Jerkens on the Gulfstream Park turf. The New York-homebred son of Pure Prize was a close second last time out in the Grade 2 Elkhorn at Keeneland, which was contested over yielding ground.

"He's doing very well," Mott said. "He had a couple of very good works and he's in good order for the Gold Cup."

Red Knight will emerge from post 4 and will be piloted by Jose Ortiz.

European-based runners have won the past two editions of the Belmont Gold Cup, and a trio of European invaders have been sent for this year's running, including Raa Atoll, who enters the race fresh off a victory in the Group 2 Comer Group International 48th Oleander-Rennen at Hoppegarten in Germany going two miles. Trained and owned by Luke Comer, the British-bred son of Sea the Stars made his first start for Comer last out after being purchased and transferred from former trainer John Gosden.

Jozef Bojko will ship to ride Raa Atoll, who will break from post 8.

Breaking from the rail for Hugo Palmer is Mootasadir, who looks to make amends after finishing sixth in the Group 2 Yorkshire Cup at Goodwood. Owned by Sheikh Mohammed bin Khalifa al Maktoum, the son of Dansili has won six of his nine career starts, including the Group 3 Diamond at Dundalk.

Mootasadir will be ridden by Ben Curtis from the inside post.

OTI Racing's Amade is a two-time winner over the two-mile distance.

Trained by Alessandro Botti, the Irish-bred son of Casamento's two-mile triumphs both came over the all-weather surface, and as the lukewarm favorite. He went even further four starts back over the synthetic surface at Deauville, winning a 2 1/8-mile allowance race by three lengths.

Carded as one of five stakes events on the second day of the Belmont Stakes Racing Festival, the Belmont Gold Cup will go off as Race 10 with a post time of 5:48 p.m.