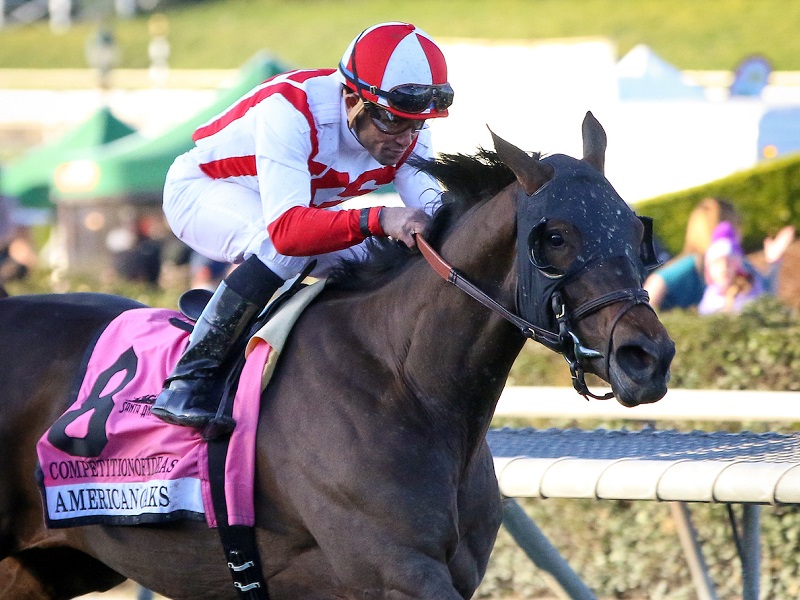 ELMONT, N.Y. - Klaravich Stables' graded-stakes winner Competitionofideas leads a pair of talented Chad Brown-trained contenders in the Grade 2, $600,000 New York for fillies and mares 4-years-old and up on Friday on the Belmont Park inner turf.

Competitionofideas looks to sustain the consistent start to her career, as she carries a 3-2-2 ledger in eight career starts into the 1 1/4-mile race. After back-to-back wins, Brown moved the Speightstown filly up to stakes company in November, where she ran third in the Winter Memories at Aqueduct Racetrack in a one-mile contest that was moved off the turf.

Shipping to the West Coast for the first time - and returning to grass -Competitonofideas proved to be a road warrior, posting an off-the-pace 2 ¾-length win in the Grade 1 American Oaks on December 29 at Santa Anita Park. To start her 4-year-old season, she ran second to stablemate and fellow New York contestant Homerique in the Grade 3 Beaugay on May 11 at Belmont, earning a personal-best 96 Beyer Speed Figure.

Hall of Famer Javier Castellano, who rode her to a maiden-breaking win at fourth asking in September at Belmont, will have the return call from post 6.

Homerique made an impression in her first U.S. start, rallying from last-of-six to best Competitionofideas by a half length to win the Beaugay, netting her a 96 Beyer as well.

After going 2-1-1 in six career starts in France, Homerique was shipped across the Atlantic with Brown taking over the training duties. Owned by Peter Brant, Homerique has been training at Belmont since May after previously being stabled at Palm Meadows Training Center in Boynton Beach, Florida.

Godolphin's Lady Montdore will be cutting back in distance after running fourth last out in the Grade 2 Sheepshead Bay on May 4 at Belmont. The 5-year-old Medaglia d'Oro mare was coming off a layoff in excess of five months but stayed close to the pace before tiring late in the 1 3/8-mile route over soft turf.

Trainer Tom Albertrani said getting Lady Montdore back in action was a positive step and is looking for a return to the form she showed when she won the Grade 2 Glens Falls in September at Saratoga and when she ran third in the Grade 1 Flower Bowl in October at Belmont. After running three of her last four races at 1 3/8-miles, she will be cutting back to the Flower Bowl's distance of 1 ¼ miles.

"I think she's come forward since the last race. It won't be a matter of fitness, it'll be if she can handle the shorter distance," Albertrani said. "She's gained some weight; that was the whole purpose of giving her time off. But she still tends to be on the lean side. We just have to make up a little bit of ground off the last start."

Lady Montdore will face familiar opponents from the Sheepshead Bay, where she was forwardly placed.

"It looks like the same group she faced last time, so I don't see much difference in the pace scenario," Albertrani said. "She usually runs her race and tends to be closer to the front-end and hopefully that's the case and we have her a little fitter."

Kendrick Carmouche will have the return call from post 4.

Stronach Stables' Holy Helena will look for firmer turf in her first start since besting Ickymasho by a head in the Grade 3 Very One on March 2 at Gulfstream Park.

The 5-year-old Ghostzapper mare entered the Sheepshead Bay last month at Belmont, but trainer Jimmy Jerkens scratched her after heavy rainfall rendered the Belmont turf soft leading up to the race on May 4.

"She hates it real soft like that, so we needed to scratch," Jerkens said. "It was a small field, but at the same time, she would have really struggled, so we decided to take her out."

Holy Helena is a three-time graded stakes winner, including a victory in the 2018 edition of the Sheepshead Bay that followed a win in the Grade 3 Very One in March 2018 at Gulfstream. She is 4-1-0 in her last six starts on turf labeled firm.

Jockey Manny Franco will pick up the mount for the first time, drawing post 1.

Since running sixth in her debut in September 2017, Hall of Fame trainer Bill Mott has seen Giant Zinger go 2-3-3 in her next nine starts, including a third-place finish in the Grade 3 Orchid on March 29 at Gulfstream.

Jose Ortiz will be in the irons from post 3.

Semper Sententiae has finished in the money in each of her last five starts, all against stakes company. Trainer Mark Hennig moved the daughter of The Factor up to graded stakes competition following a third-place finish in the Tropical Park Oaks to close her sophomore campaign in December. In her 4-year-old bow, she ran third in the Grade 3 La Prevoyante in January and followed with another third in Grade 3 The Very One on March 2 at Gulfstream.

Off a runner-up effort in the Sheepshead Bay, Semper Sententiae returns to Belmont, this time with the services of Hall of Fame jockey John Velazquez from post 7.

Vexatious, who won the Grade 3 Dowager through disqualification and ran third in the Red Carpet in November, drew post 5 for trainer Neil Drysdale.

Matty's Magnum, the winner of the Winter Memories, will go for her first career graded stakes win for trainer David Donk, drawing post 2.