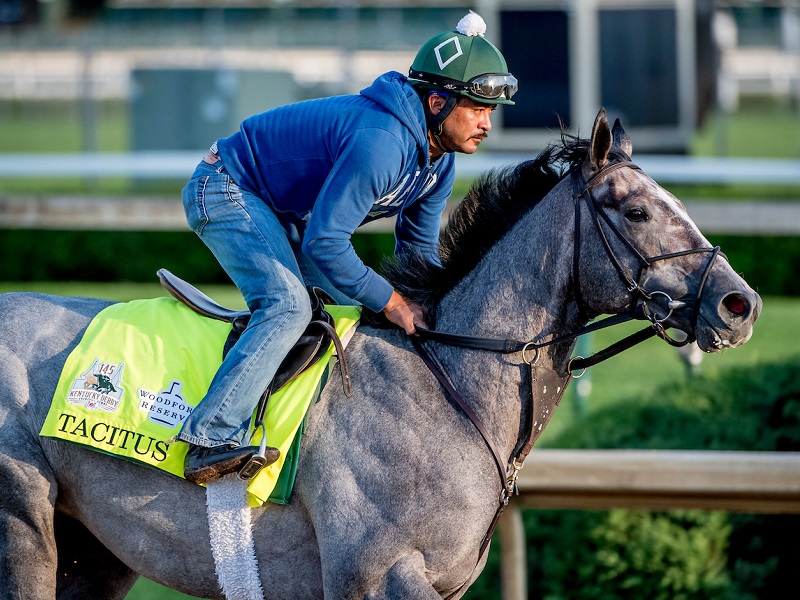 Working in company with Juddmonte maiden Tide of the Sea [1:01.50], Tacitus finished up strong down the lane, galloping out well in front of his workmate.

Mott said he was pleased with the final breeze ahead of the 1 ½-mile Belmont, set for Saturday, June 8.

"He was moving very good, very level and very even. He went along in '12s' every furlong and went out strong enough," said Mott. "It was very similar to last week. Once he gets in his rhythm he moves very nicely."

The son of Tapit and multiple Grade 1 winner Close Hatches graduated at Aqueduct Racetrack in November and won the Grade 2 Tampa Bay Derby in his sophomore debut. Tacitus returned to the Big A in April to capture the Grade 2 Wood Memorial presented by NYRA Bets.

Last out, in the Kentucky Derby, Tacitus rallied from 16th to finish fourth, defeated less than four lengths, over a sloppy Churchill Downs main track. He was elevated to third when Maximum Security, who crossed the wire first, was disqualified for an infraction at the top of the stretch that saw the Mott-trained Country House declared the winner of the 145th Run for the Roses.

Mott said Tacitus' physical appearance has impressed him as the colt trains into the "Test of the Champion."

"I haven't weighed him, but visually it looks like he's in good flesh. I think he's done well. He's a good eater," said Mott.

Bred in Ontario by the Tall Oaks Farm of Ivan Dalos, the talented chestnut boasts a record of 5-4-3 from 24 career starts with purse earnings in excess of $1.9 million. He broke through at the Grade 1 level in September at Belmont over soft going in the Joe Hirsch Turf Classic while earning a career-best 108 Beyer Speed Figure, and doubled up at the top flight last out with a neck score over Arklow in the Man o' War, which garnered a 106 Beyer on firm footing.

Channel Maker breezed a half-mile in 49 flat on Sunday morning on the Belmont dirt training track.

"He worked very well. We're very happy with him. It was a very nice breeze. He's ready for the Manhattan," said Mott.

Mott will be quite busy during the Belmont Stakes Racing Festival, set for June 6 - 8, saddling a number of top contenders, including Red Knight in the Grade 2, $400,000 Belmont Gold Cup Invitational; Giant Zinger in the Grade 2, $600,000 New York; and Capla Temptress in the Grade 1, $700,000 Longines Just a Game.

With the 151st running of the Belmont Stakes as its centerpiece, the 2019 Festival will include 18 stakes races over the three days including an unprecedented eight Grade 1 races on Belmont Stakes Day, June 8.