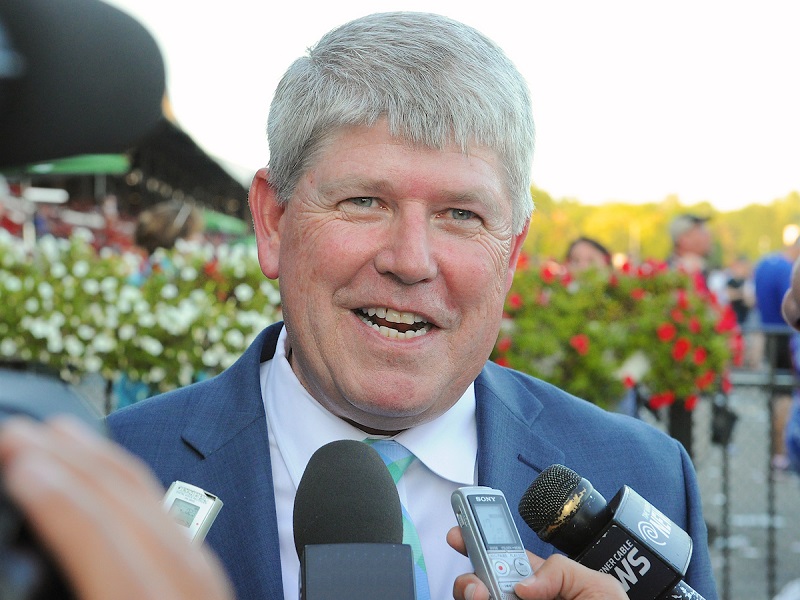 ELMONT, N.Y. - In the weeks following Bourbon War's eighth-place finish the Grade 1 Preakness, trainer Mark Hennig has examined and reexamined all the factors that might have gone into the Tapit colt's disappointing performance, from racing for the first time with blinkers to being confused by the circumstances - mainly the loose horse - to being unfamiliar with the turns at Pimlico.

"There's no indication why he threw in that race," mused Hennig Monday morning after the Bourbon Lane Stable and Lake Star Stable color-bearer galloped 1 1/8 miles over the main track at Belmont Park, where he will likely face nine others in Saturday's 151st running of the Belmont Stakes.

"If you look at the chart of the race, he went from eighth, to eleventh, to eighth - maybe when he was taken outside on the backside he thought he was supposed to ease up because he was out of the bridle for about a quarter-mile, then picked it up again in the stretch."

Certainly, said Hennig, there seemed to be no physical reason for it.

"He was not tired at all after the race," said Hennig. "I don't know how much running he actually did. I held him for a bath after the race and he bit me in the stomach and tore my shirt. He was actually angry after the Preakness."

Bourbon War has been nothing but bright and happy since returning to Belmont Park, said Hennig, having turned in a half-mile work in 48.74 seconds on Thursday. On Saturday, the blinkers - which were added after Bourbon War's fourth-place effort behind Maximum Security, Bodexpress and Code of Honor in the Grade 1 Florida Derby - will be removed, and Hall of Fame jockey Mike Smith, a three-time winner of the "Test of the Champion" will be aboard.

"Put a line through the Preakness? Hopefully, that's the right thing to do," Hennig said.