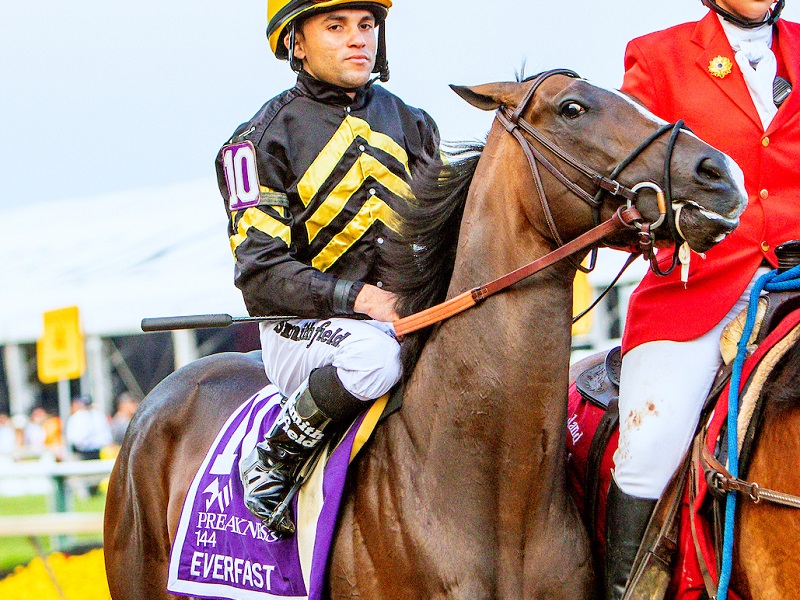 "Everfast worked great today. It's a mile and a half race so we crammed two works back to back to make sure he is plenty fit," trainer Dale Romans said. "The way he worked out there this morning he looked great. He went even early and finished fast and didn't want to pull up, which might be key going into the Belmont."

Monday's work was the fastest five furlongs Everfast has officially recorded dating to last summer. Though the colt's closing kick nearly allowed him to complete a Hail Mary-pass as a 29-1 longshot in the Preakness, Romans wouldn't be surprised to see Calumet Farm's charge laying closer in the 12-furlong Belmont Stakes - a race where tactical speed is most crucial.

"I would say going a mile-and-a-half, any horse can be where they want. They're going to be going so slowly early on," the Eclipse Award-winning trainer said. "I just felt like in the Preakness, even though he was coming off of a sprint, he'd have a strong finishing kick and it looked like a lot of speed in the race. But I'll let the jockey figure it out in the Belmont.

"In the Belmont, by the time they get to the eighth pole, they are all tired," he added. "It is hard for a horse to kick. So I would think he would be laying a little bit closer."

Upsetting the apple cart at a New York venue would be no new venture for Romans, who famously saddled Keen Ice to a stunning triumph over Triple Crown hero American Pharoah in the 2015 Grade 1 Travers Stakes. With one win in 11 starts, Everfast has been under the radar for most of his career but did tease of things to come when he ran second at odds of 128-1 in the Grade 2 Holy Bull Stakes on February 2.

"He's coming into it as good as he could be," Romans said. "I didn't see [going to the Preakness] as big a chance as a lot of the media did. I feel like we are taking a horse that is live...and at the Preakness I think we took a live longshot.

"He showed [in the Holy Bull] then that he could compete with good horses. And like I've said many times now that once they show it that they can, then don't give up on them."

Dale Romans Talks About Everfast Ahead of the 2019 Belmont Stakes