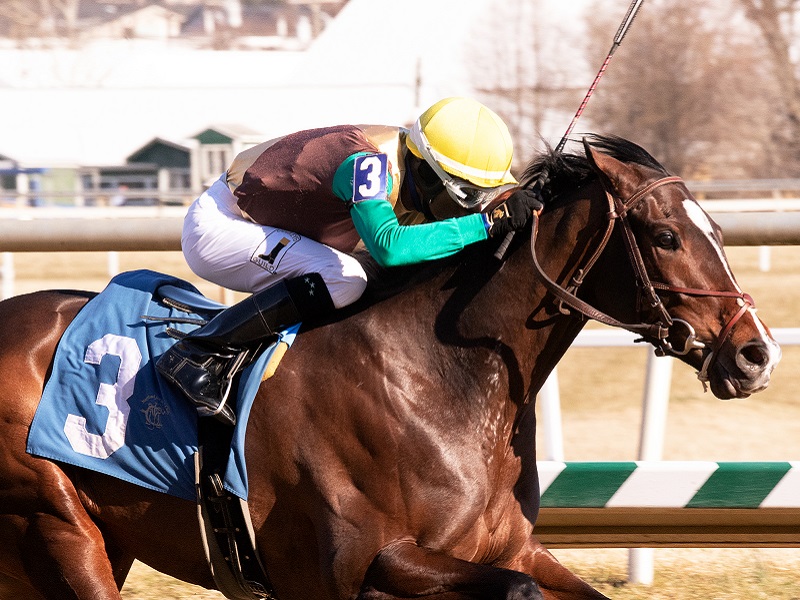 ELMONT, NY - The race is named for one of the most popular horses in New York, and, appropriately, the $150,000 Easy Goer will be run on Belmont Stakes Day, part of a 10-stakes race extravaganza topped off by the 151st running of the Grade 1, $1.5 million Belmont Stakes.

Easy Goer was nearly unbeatable at Belmont Park from 1988-90, with his greatest victory coming in the 1989 Belmont Stakes when he ended rival Sunday Silence's Triple Crown bid. His other wins at the iconic track came in the Cowdin, Champagne, Woodward, Jockey Club Gold Cup and Suburban.

On Saturday, the ninth edition of the Easy Goer for 3-year-olds kicks off the stakes portion of the 13-race program with owner John Oxley's Dream Maker facing five others in the 1 1-16 mile race.

Dream Maker, a gray/roan son of leading sire Tapit, comes into the Easy Goer off a third-place finish in the Grade 3 Pat Day Mile on May 4 at Churchill Downs. A Kentucky Derby prospect at one point, Dream Maker ran a disappointing 10th in the Grade 2 Tampa Bay Derby after being bumped and followed that with a discouraging 13thh in the Grade 2 Blue Grass at Keeneland Race Course.

He worked a half-mile in 48.29 seconds on Saturday at Belmont, and trainer Mark Casse - who will saddle Preakness winner War of Will as well as Sir Winston in the Belmont Stakes - is optimistic.

"He showed definite improvement in his last start,'' said Casse, "and I think he will enjoy the one turn and the distance."

West Point Thoroughbreds and Chris Larsen's Still Dreaming was sixth in the Grade 3 Chick Lang at Pimlico on May 18, Preakness Day. But trainer Graham Motion figures the Easy Goer is a good spot for the chestnut son of Flatter.

"He's a bit of a difficult horse to place because we think he's a one-turn horse and six furlongs [distance of the Chick Lang] is a little too quick for him,'' said Motion. "This being a one-turn mile-and-a-sixteenth seems like it should fit him. I felt like he was running at the end of the Chick Lang and he previously won at seven furlongs."

Rajiv Maragh rides from the rail.

Zayat Stables' Majid is 3-for-3 this year for trainer Rudy Rodriguez. A son of Shackleford, Najiid was 0-for-2 as a 2-year-old for two different trainers, then broke his maiden in January, and won a pair of optional claimers, most recently at Belmont on May 10 going a mile. He will be ridden by Luis Saez from post 5.

"We're very proud of the horse and what he's done so far this year being undefeated as a 3-year-old,'' said Justin Zayat, racing manager for the stable. "He reminds me a lot of his sire Shackleford that he gets better with age and distance. Saturday's race will be a good test for him and he seems to be up to the task."

Outshine, owned by Let's Go Stables, Richard D. Schibell and Madaket Stables, worked five furlongs in 1:00.92 on Saturday at Belmont, the ninth-fastest of 28 at the distance. He comes into the race off a ninth-place finish in the Grade 2 Wood Memorial at Aqueduct. The son of Malibu Moon, trained by Todd Pletcher, drew post 4 and will be ridden by Hall of Famer John Velazquez.

Rounding out the field are Alwaysmining, whose six-race winning streak was snapped when he finished 11th in the Grade 1 Preakness, and supplementary nomination Grumps Little Tots, who most recently was placed eighth in the Grade 2 Wood Memorial behind early Belmont Stakes favorite Tacitus.