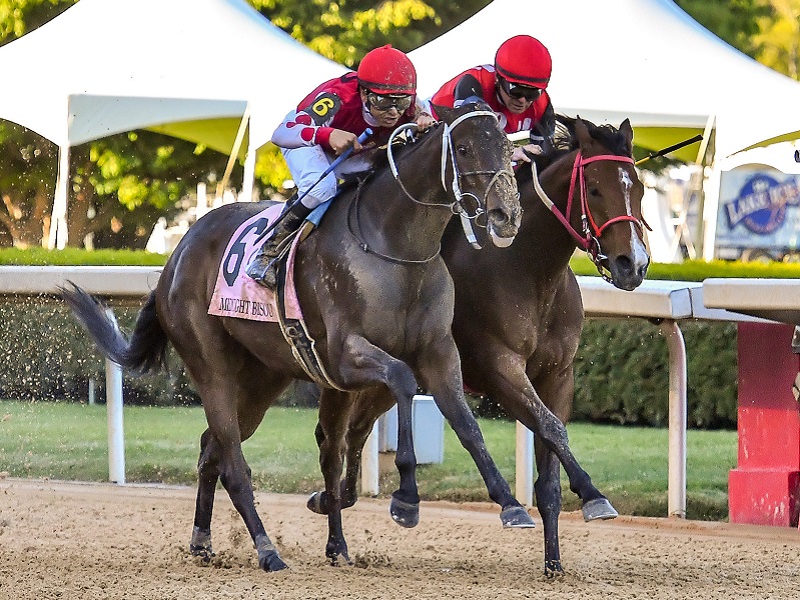 ELMONT, N.Y. - Multiple Grade 1 winner Midnight Bisou, who is a perfect three-for-three so far this year, leads a talented field of seven entered for the 51st running of the Grade 1, $700,000 Ogden Phipps Stakes at 1 1/16 miles on Saturday at Belmont Park. The Ogden Phipps is a Breeders' Cup Challenge Series "Win and You're In" event to the Grade 1 Longines Breeders' Cup Distaff at Santa Anita Park November 2

The Ogden Phipps is one of eight Grade 1 stakes on Saturday's 13-race card, which is the final day of the Belmont Stakes Racing Festival, highlighted by the 151st running of the Grade 1, $1.5 million Belmont Stakes presented by NYRA Bets. It will go as Race 5 with an approximate post time of 2:01 p.m.

Trained by Hall of Famer Steve Asmussen for Bloom Racing LLC., Madaket Stables, and Allen Racing, Midnight Bisou will be making her first start since winning the Grade 1 Apple Blossom Handicap at Oaklawn Park April 14. Prior to that race, the daughter of Midnight Lute, bred in Kentucky by Woodford Stables, won the Grade 3 Houston Ladies Classic and the Grade 2 Azeri.

The connections of Midnight Bisou began mapping out her 4-year-old campaign shortly after she ended her sophomore season with a third in the 2018 Breeders' Cup Distaff behind Monomoy Girl. To date, that plan has worked perfectly.

"The Ogden Phipps has always been in the back of our minds," owner Jeffrey Bloom of Bloom Racing said. "We wanted to get through the Apple Blossom first and after she won that, this race seemed like the most logical choice. It seemed like the best way to get us back to the Breeders' Cup, which is the ultimate goal."

Midnight Bisou, who drew post 2, will be reunited with Hall of Fame jockey Mike Smith Saturday.

Escape Clause, who has excelled since leaving her base at Assiniboia Downs in Winnipeg, Canada, where she was a dominate figure, makes her first start in New York, following her loss by a nose to Midnight Bisou in the Apple Blossom. Earlier in the year, she won the Grade 3 La Canada Stakes at Santa Anita for owners Don Schnell, Barry Arnason and True North.

"She's doing real well," trainer and co-owner Don Schnell said. "She has gotten better with age and experience. Ever since we brought her south [from Canada], she's done pretty good.

"I probably shouldn't like Midnight Bisou, but she's a lovely mare and always tries really hard," Schnell said. "She's going to be tough to outrun. In the Apple Blossom, we had a little trouble in the first turn when Wonder Gadot came over on us and it took her a second to get back into stride, but that's just an excuse and I don't like to make excuses. We're just hoping for a clean trip and that the best horse wins."

Jockey Tyler Baze will be aboard Escape Clause, who drew post 4.

Among the local hopefuls for the Ogden Phipps is Blue Devil Racing Stables' Come Dancing, who has won her last two starts, including the Grade 2 Ruffian at Belmont on May 5.

"She's doing really well," trainer Carlos Martin said. "She's only had two races this year by design. She had a great work the other day. [Jockey] Manny Franco said she's doing as good as she's ever done. She's eating up and looks like a picture, which is what you want to see in these fillies. There are probably three or four fillies in here that you're going to see later in the year at the Breeders' Cup. It's going to be a great race for the fans."

Come Dancing will break from post 1 with Franco again in the irons.

Trainer Chad Brown will be represented by Pacific Wind, owned by Sharon Alesia, Peter Brant, Ciaglia Racing and Domenic Savides. The 5-year-old daughter of Curlin comes off a second to Come Dancing in the Ruffian and will break from post 3 with Irad Ortiz, Jr. aboard.

Reddam Racing's multiple stakes winner Mopotism, coming off a fourth in the Grade 1 La Troienne Stakes at Churchill May 3, rounds out the Ogden Phipps field from the outside.