Pletcher Duo of Marconi, You're To Blame Headline G2 Brooklyn 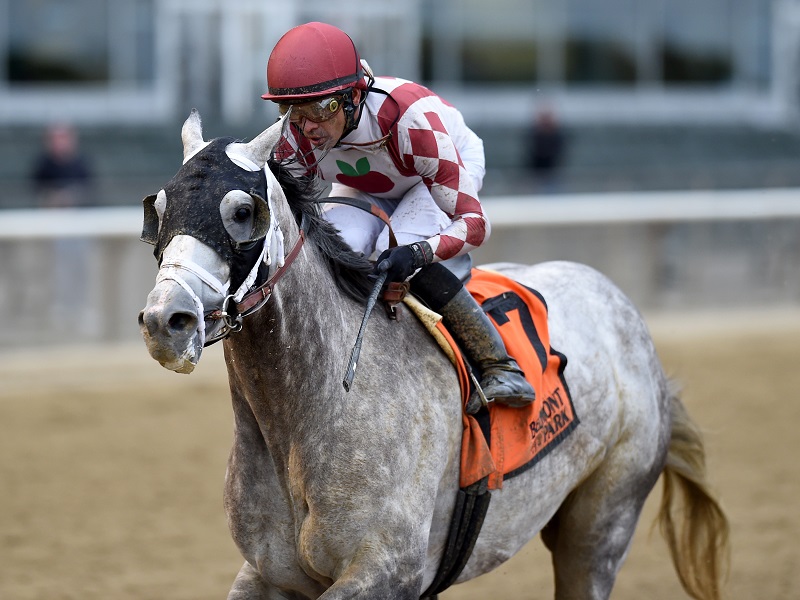 ELMONT, N.Y. - Trainer Todd Pletcher will send out a formidable trio of contenders in the Grade 2, $400,000 Woodford Reserve Brooklyn Invitational on Saturday at Belmont Park led by dirt marathon maven You're to Blame.

The Brooklyn, run at 1 ½ miles on the main track, is the lone Grade 2 race on Belmont Stakes Day and the finale of the 13-race card that features eight Grade 1 stakes, culminating in the 151st renewal of the "Test of the Champion". Post time for the 131st iteration of the Brooklyn is set for 8:00 p.m. Eastern.

Since being transferred to Pletcher in late 2017, Bortolazzo Stable's You're to Blame has steadily improved, showing a particular affinity for marathon races on the main track, which he got his first crack at in last year's Grade 3, 1 ½-mile Greenwood Cup, a race he won by a neck over fellow Brooklyn entrant War Story.

In his next race, the son of Distorted Humor ran into fellow distance-lover Rocketry, who he will meet again on Saturday, in the 1 ⅝-mile Temperence Hill Invitational at Belmont, finishing second by 1 ½ lengths. After a six-month break, the bay horse kicked off his 5-year-old campaign with a win in an optional claimer at Gulfstream Park and missed by a neck in the Grade 3, 1 ¼-mile Pimlico Special last out.

"He showed us last year that he handles this distance well," Pletcher said. "We weren't really sure if we were going to come here after the Pimlico Special; it was going to be a matter if he told us he was ready to run back in three weeks. His energy level has been really, really high and he came back with a good breeze, so we felt like he was going to be hard to hold on the ground for another month until the Suburban. We feel like running him is the right thing to do."

You're to Blame will be ridden by Jose Ortiz and the duo will depart from post 7.

The up-and-coming Marconi, a $2 million purchase out of the 2016 Keeneland September Yearling Sale, will give Pletcher another strong chance in the race by virtue of a 2 ¾-length score over Rocketry in the Flat Out in his most recent race on May 9 at Belmont. Like You're to Blame, the Tapit colt has proven to be adept at longer dirt races, taking the 1 3/16-mile Skip Away at Gulfstream one race prior to winning the 1 ⅜-mile Flat Out.

"He seems like he's doing great," said Pletcher, who trains Marconi for Bridlewood Farm, Mrs. John Magnier, Derrick Smith and Michael Tabor. "He ran well in the Skip Away and handled the mile and three eighths of the Flat Out very well. We kind of had this race in mind all along, thinking that the mile and a half would suit him. He seems to be maintaining really good form and we're happy with him."

Jose Lezcano will be aboard Marconi and the pair will leave from the inside post.

Pletcher's triumvirate is completed by Biblical, owned by China Horse Club International, part-owner of last year's Triple Crown winner Justify. Though he's been a bit slow to develop, Biblical has picked it up during the first half of his 4-year-old campaign and exits an encouraging third-place finish in the 1 ½-mile Champions Day Marathon on April 30 at Churchill Downs.

"He didn't run too badly going a mile and a half for the first time at Churchill," Pletcher said. "He was just a touch keen. I think if we can work out a better trip and get him a little more settled, he's a horse that's shown hints of having enough ability to be competitive in a race like this. He just needs to step up a notch. He's been a bit inconsistent, but he's training like he's sitting on a good race, so we'll give it a try."

Biblical drew post 5 and will enlist the services of Luis Saez.

Earner of more than $2.7 million in his 33-race career, the hard-knocking War Story will line up in the Brooklyn starting gate for the third straight year. The Jorge Navarro trainee won the race in 2017 and finished a close second last year, but his form tailed off at the end of 2018 and he finished a distance third in his 2019 debut, the Grade 2 Charles Town Classic, a race he won in 2017.

Trainer Jimmy Jerkens' Rocketry will look to continue to improve coming off a runner-up placing in the Flat Out. The 5-year-old son of Hard Spun was a force to be reckoned with in marathon races in 2018, doubling up on 100 Beyer Speed Figures to close out the year while victorious in the Temperence Hill and Grade 2 Marathon at Churchill, but has failed to recapture that form in two starts this year.

The Centennial Farms color-bearer finished a dull fifth in his 2019 debut, the Skip Away, but showed signs of life late in the Flat Out rallying from well back to finish 2 ¾ lengths behind Marconi. He will break from post 6 with Joel Rosario in the irons.

Shipping in from California, Campaign will aim to win back-to-back races at 1 ½ miles after taking the Grade 3 Tokyo City last out for trainer John Sadler and Woodford Racing. The 4-year-old Curlin colt has improved markedly on dirt this year, with a fourth-place finish in the Grade 1 Santa Anita Handicap and a win in an optional claimer at Santa Anita also on his resume. Hall of Famer Javier Castellano has the mount from post 2.

Rounding out the field are Realm, who finished third in the longest start of his career in the Skip Away two back for trainer Barclay Tagg; Sonneteer, winner of the Champions Day Marathon in his most recent start for trainer Keith Desormeaux and Calumet Farm; and Forewarned, trained by Uriah St. Lewis.