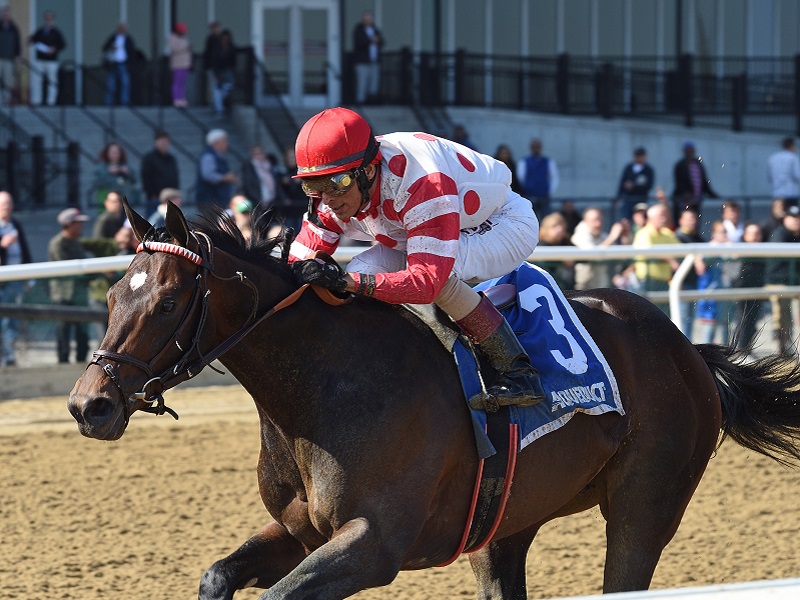 ELMONT, N.Y. -  A talented field of 11 will square off in Saturday's Grade 1, $400,000 Woody Stephens presented by Mohegan Sun, a seven-furlong sprint for sophomores on Saturday, Belmont Stakes Day, at Belmont Park.

The Woody Stephens presented by Mohegan Sun is one of an unprecedented eight Grade 1 races on the card for the Grade 1, $1.5 million Belmont Stakes.

Red Oak Stable and Madaket Stables' Mind Control, winner of the Grade 1 Hopeful at Saratoga as a 2-year-old, has trained impressively into the Woody Stephens for trainer Gregory Sacco.

A winner of two of three starts this season, including scores in the Jerome and the Grade 3 Bay Shore at Aqueduct Racetrack, Mind Control has posted a series of strong works at Monmouth Park including a bullet breeze on May 24 in 1:00.60 followed by a June 1 effort clocked in the same time.

"The bullet work was by himself. The last work was in company and he did it well within himself," said Sacco. "We've tightened the screws a little bit coming into this race. He galloped out good and the main thing is that he came out of the works really well. He was full of himself this morning."

Mind Control initially competed on the Kentucky Derby trail, picking up points in the Jerome win along with a runner-up effort to Haikal in the Grade 3 Gotham.

However, the connections decided to re-focus the colt on a campaign geared toward sprint races with the long-term goal of competing in the Grade 1, $500,000 H. Allen Jerkens Memorial presented by Runhappy slated for August 24 at Saratoga Race Course.

"We wanted to march forward on the Derby path," said Sacco. "But, we just felt his development, and how super talented he is up to a mile, that we wanted to keep him on this path.

"We had the Bay Shore earmarked with the Woody Stephens and the Allen Jerkens," continued Sacco. "So, we've got by the first one and he's had two months to fill out and blossom. He's a very happy, strong horse coming into the race on Saturday. He couldn't be doing any better."

Mind Control and stablemate Joevia, a contender for the Grade 1 Belmont Stakes presented by NYRA Bets, will ship to Belmont on Wednesday morning from their Monmouth base.

The improving Wendell Fong will look to answer the call as he steps up to the Grade 1 level for the first time in the Woody Stephens.

Trained by Jeremiah Englehart for owner Gold Square [Al Gold], Wendell Fong is named after a non-sequitur from the hit TV show Frasier in an episode entitled, 'And The Dish Ran Away With The Spoon.'

"The owner is a big Frasier fan," explained Englehart. "There's an episode where Niles and Daphne are running away from a wedding and Niles picks up the phone and it's a wrong number. Nile says, 'No, there is no Wendell Fong here.' Al's gifted when it comes to naming horses."

Wendell Fong has dialed up increasingly stronger speed figures in his brief career thus far, winning three of four starts while earning a career-best 92 Beyer Speed Figure last out when capturing the Gold Fever at six furlongs on a sloppy Belmont main track.

A winner on debut in his only juvenile start, the one blemish on Wendell Fong's record came at second asking when fourth in the one-mile Miracle Wood at Laurel Park.

"In his first race, he was really green but had that desire to win," said Englehart. "In his next start, I put blinkers on him which was a ridiculous move. It just wasn't the thing to do. But he's just a very competitive horse and really easy to work with and enjoys racing. All I have to do is keep him happy."

A $160,000 purchase at the Keeneland September Yearling Sale, Wendell Fong has overcome some issues incurred as a 2-year-old.

"Travis Durr and I bought him at the September sale as a yearling. He just had that look about him. He had a nice, strong hip. A good shoulder angle. He just seemed like a nice horse," said Englehart. "He injured his ankle last year as a 2-year-old and we did surgery on him at Patty Hogan's clinic and they did a fantastic job. He has turned out to be a real good racehorse."

Wendell Fong bullet breezed five furlongs in 1:00.80 on June 1 over the Laurel Park main track, with regular rider Jorge A. Vargas, Jr. up, in his final prep for the Woody Stephens.

"He loves training there. The last work went really well - Jorge came by to work him and was pleased with how it went. He just went by himself. He can be aggressive and will fight to win [if he goes in company], and we didn't need him to go too fast," said Englehart.

Klaravich Stables' Complexity, a Maclean's Music bay bred in Kentucky by Stonestreet Thoroughbred Holdings, won on debut at Saratoga in September and followed up with a convincing three-length win over Code of Honor at Belmont in the Champagne. He completed his season with a disappointing 10th-place finish in the Grade 1 Breeders' Cup Juvenile.

Complexity, who has posted a string of quick works at Saratoga, will make his seasonal debut under regular pilot Jose Ortiz from post 4.

Juddmonte Farms' homebred Honest Mischief graduated at second asking by eight lengths on April 6 at Keeneland. The bay son of Into Mischief is out of Grade 1 winner Honest Lady and is a half-brother to 2008 Grade 1 Forego winner First Defence.

Hall of Famer Javier Castellano retains the mount from post 1.

Calumet Farm's homebred Lexitonian returns to Belmont for the first time since his debut win last June when trained by Todd Pletcher. The Speightstown chestnut, transferred to trainer Jack Sisterson for his sophomore campaign, captured the Grade 3 Chick Lang last out at Pimlico.

Joel Rosario picks up the mount on Lexitonian, who will break from post 10.