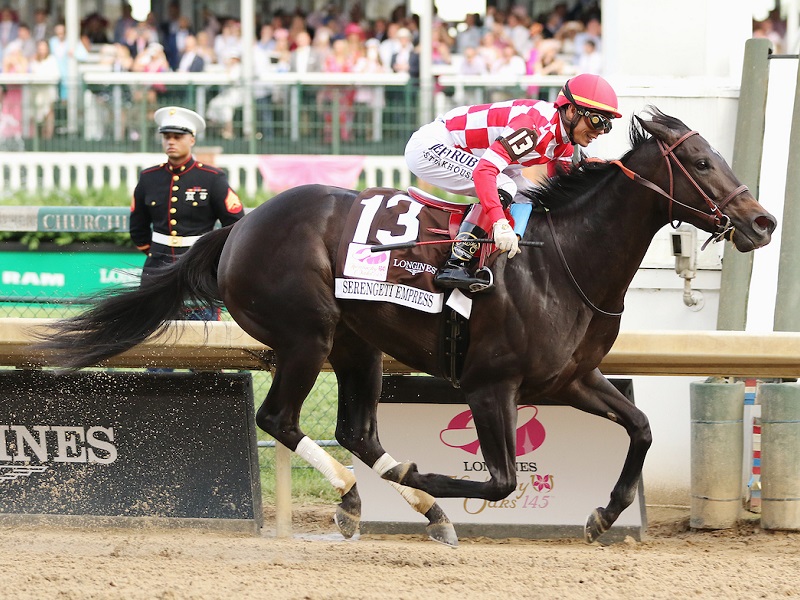 ELMONT, NY - A wide-ranging field of nine 3-year-old fillies, led by Grade 1 Kentucky Oaks heroine and millionaire Serengeti Empress, will be making their first-ever appearances at Belmont Park Saturday in the $700,000 Acorn Stakes, one of seven Grade 1 races on the undercard for the 151st running of the Grade 1, $1.5 million Belmont Stakes presented by NYRA Bets.

Serengeti Empress, a dark bay daughter of Alternation, is 2-for-3 this year, taking the Grade 2 Rachel Alexandra to kick off her sophomore season before faltering in the Grade 2 Fair Grounds Oaks, in which she bled and was vanned off.

"After the race at the Fair Grounds, we took her back to the barn, sat down and mapped out a game plan - not for racing - but for her to show us she was she was recovering," said trainer Tom Amoss. "She got to Churchill at start of April, and we had devised a plan where she was scoped constantly and watched all the time. That's when she showed up again.

"When we decided to go in the Oaks, I was confident she wouldn't bleed, but it was still in the back of my mind. We did all we could do, and we rolled the dice."

The gamble paid off as Serengeti Empress posted a front-running victory at 13-1 odds in the Oaks, never looking back as she won the 1 1/8-mile race by 1 ¾ lengths

"Winning the Oaks was pure joy," said Amoss. "The focus now is to see if we can make her a more consistent athlete. We know she's a great athlete because she showed us that in the Kentucky Oaks."

Owned by Joel Politi, who purchased her for $70,000 at the Keeneland September yearling sales, Serengeti Empress has won five of her eight starts overall, including a victory in the Grade 2 Pocahontas last September at Churchill Downs.

"She's going to shorten up from two turns to one turn which is obviously inviting speed into the race," said Amoss, who will give Irad Ortiz, Jr. a leg up as the pair leaves from the inside post. "Her form says she wins races on the lead, but we'll see how it works in the Acorn. If she makes the lead, great. If she doesn't, I'm confident she'll be the just off the pace."

The undefeated Fancy Dress Party, who scored her fourth straight win in the Grade 3 Beaumont in April at Keeneland, is one of two other graded stakes winners in the field. Trained by Ben Colebrook, the L N J Foxwoods color-bearer came from off the pace to break her maiden last October at Keeneland, and subsequently posted front-running victories in an optional claimer at Churchill Downs and in the Glitter Woman at Gulfstream park to kick off her 3-year-old campaign.

The Munnings filly drew post 5 and will be ridden by Joel Rosario.

At the other end of the racing spectrum is the Chad Brown-trained Guarana, who enters the Acorn off just one start, albeit an impressive one. The Three Chimneys Farm homebred made a dazzling debut in April at Keeneland Race Course, drawing off to win a 6 ½-furlong race by 14 ¾ lengths in 1:16.43.

Another stepping up into graded stakes company is Bo Hirsch's homebred Ce Ce, a chestnut daughter of Elusive Quality who has sparkled in two starts at Santa Anita Park. She broke her maiden in a professional manner on April 19 at six furlongs, and, when stretched out an extra half-furlong on May 11, finished second by a neck facing older fillies.

"She was run down in the closing yards," said trainer Michael McCarthy. "Coming back to facing straight three-year-olds will be to her benefit, and I think the one-turn mile will suit her as well. I'd like to see her sitting second with a target."

Victor Espinoza will be aboard when she leaves from post 9.

No worse than third in three straight graded stakes appearances, Arindel's Cookie Dough will be cutting back in distancer after finishing third going 1 1/8 miles in the Grade 2 Black-Eyed Susan. Prior to that, the homebred daughter of Brethren was third in the Grade 2 Gulfstream Park Oaks at 1 1/16 miles and second by a head in the Grade 2 Davona Dale at a flat mile.

"She's done everything right since she's been here," said Kiaran McLaughlin, who took over training from Stanley Gold when she was sent to New York. "She worked a good half-mile on Saturday [49.44 seconds on the Belmont training track]. The race looked like it has a lot of speed, so we almost have to hope and lay off it."

McLaughlin, who won the 2011 Acorn with It's Tricky, will give a leg up to Hall of Famer Javier Castellano. The pair will leave from post 3.

The Acorn, which will be run for the 89th time, also attracted the second, third and fourth-place finishers from the Grade 2 Eight Belles on May 3 at Churchill Downs.

Bell's the One, who won four straight races to launch her career, rebounded from a distant seventh-place finish in her first graded stakes outing, the Grade 1 Ashland to finish second by 5 ½ lengths in the seven-furlong race over a sloppy track. Corey Lanerie will ride from post 4.

Also exiting the Eight Belles is Queen of Beas, who persevered to finish third, 1 ½ lengths behind Bell's the One and a head in front of Proud Emma, the only filly to have made a New York appearance, having finished fourth in the Grade 2 Gazelle in April at Aqueduct.

Rounding out the entrants is Jeltrin, who was 51-1 when she won Gulfstream Park's Grade 2 Davona Dale at a mile in March.