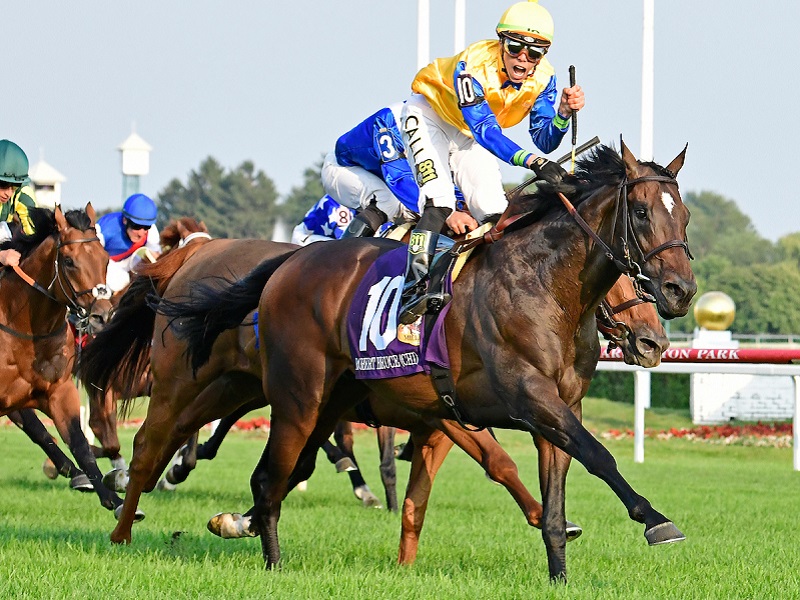 ELMONT, N.Y. - In search of a fifth win in the Grade 1, $1 million Manhattan, conditioner Chad Brown entered a quartet of accomplished runners to compete in the 147th running of one of the most prestigious turf races of the Belmont Park spring/summer meet and the prelude to the Grade 1, $1.5 million Belmont Stakes on Saturday June 8.

Leading the charge of Brown's contingent is Klaravich Stables' multiple graded stakes winner Bricks and Mortar. Sired by Giant's Causeway, the 5-year-old has won his last four consecutive races including victories in three straight graded stakes to start his 2019 campaign: the Grade 1 Pegasus World Cup Turf Invitational in January, the Grade 2 Muniz Memorial Handicap at Fair Grounds in March, and the Grade 1 Turf Classic at Churchill Downs in his last start.

Bricks and Mortar has posted three breezes since his victory last out at Churchill, most recently working four furlongs in 49.98 seconds on the inner turf at Belmont, and Brown said the horse is in fine fettle heading into the Manhattan.

With Irad Ortiz, Jr. named to ride, Bricks and Mortar will depart from post 8.

Looking to rebound from a fifth-place finish in the Grade 3 Fort Marcy for Brown and owners Convento Viejo is 5-year-old Chilean-bred Robert Bruce.

Unbeaten in Chile where he made his first six career starts, Robert Bruce kicked off his 2018 campaign making his North American debut for Brown in winning the Grade 3 Fort Marcy before going on to capture the Grade 1 Arlington Million.

After ending his year with a seventh-place finish in the Grade 1 Breeders' Cup Turf Classic, Robert Bruce returned to start his year in the Grade 3 Fort Marcy on the inner turf course at Belmont listed as soft. Sent off as the 3-5 favorite, he bobbled at the start and finished fifth to stablemate and co-entrant Olympico.

"He had a disappointing first race back," said Brown. "He caught a soft course and the race didn't unfold the way we expected. He's fit and strong and hopefully he'll move forward.

Drawing post 3, Robert Bruce will be ridden by Jose Ortiz.

Olympico will be ridden by Kendrick Carmouche and depart from post 7.

Rounding out Brown's quartet is French-bred Raging Bull for owner Peter Brant. The 4-year-old sired by Dark Angel has made each of his nine career starts in North America, notching five wins including a graded stakes victories last year in the Grade 1 Hollywood Derby at Del Mar and the Grade 2 Hall of Fame and Grade 3 Saranac at Saratoga Race Course.

Starting his year in the Grade 1 Makers Mile at Keeneland on April 12, he finished fourth and followed up with another fourth-place running in the Turf Classic at Churchill.

Raging Bull will leave from post 1 with Hall of Famer Javier Castellano aboard.

A 5-year-old gelding sired by Channel Maker, the multiple graded stakes winner with over $1.9 million in earnings for Hall of Fame trainer Bill Mott improved off a fourth-place finish the Grade 2 Mac Diarmida at Gulfstream Park to win the Grade 1 Man o' War on May 11.

After breezing four furlongs in 49 seconds flat on the Belmont dirt training track on June 2 in his final major preparation for the race, Mott said he was pleased with how Channel Maker is doing heading into the race.

"He worked very well," said Mott. "We're very happy with him. It was a very nice breeze. He's ready for the Manhattan."

A 6-year-old son of Speightstown, Qurbaan has yet to reach the winners circle this year but enters the Manhattan following a game second-place finish in the Turf Classic, beaten half a length by Bricks and Mortar.

Prepping for the race from the privately-owned Greentree Training Center in Saratoga; where he's breezed two times since the Turf Classic, McLaughlin said he is excited to run Qurbaan in the race.