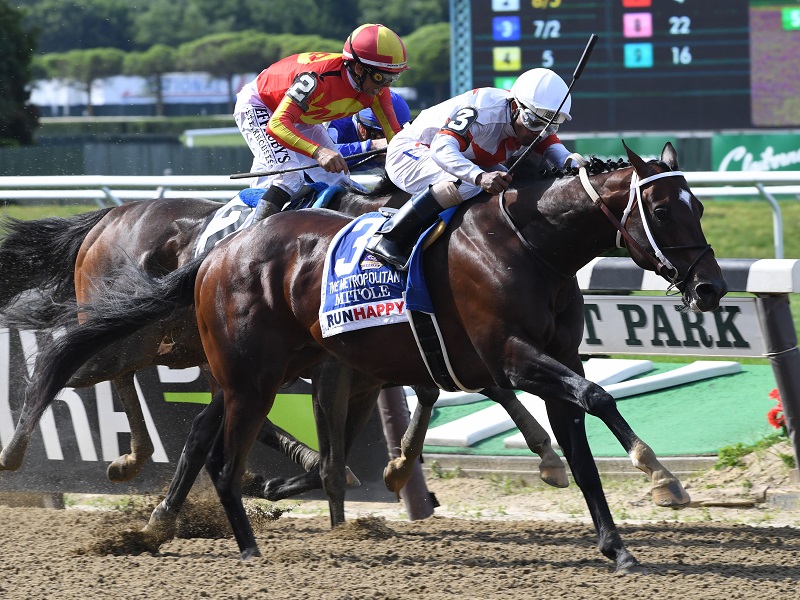 ELMONT, N.Y. - On a day the 151st running of the Belmont Stakes took top billing, the Grade 1, $1.2 million Runhappy Metropolitan Handicap came close to usurping its marquee status at Belmont Park with a loaded field and a thrilling finish that saw Mitole effectively stretch out to a mile, fending off challenges from 8-5 favorite McKinzie and two-time Dubai World Cup winner Thunder Snow to prevail.

Coming into the race with a six-race win streak, all of which he accomplished by open lengths, William and Corinne Heiligbrodt's Mitole was sent off as the 7-2 second choice in a field that featured six Grade 1 winners, including $16 million earner Thunder Snow.

Trained by Hall of Famer Steve Asmussen and ridden by Ricardo Santana, Jr., who teamed up to win last year's Met Mile with Bee Jersey, Mitole broke well and sat just off Godolphin Mile winner Coal Front early as he carved out splits of 22.17 seconds for the opening quarter-mile and 44.38 for the half on the fast main track.

Drawing abreast of Coal Front as the field entered the turn, Mitole had stuck his head in front by its conclusion, running three-quarters in 1:08.24, and the son of Eskendereya began to inch away from the pacesetter at the top of the stretch, with Thunder Snow and McKinzie stacked up behind him looking to extricate themselves from traffic.

Thunder Snow was the first to find clear running and dove to the rail to mount his rally and was followed intently by McKinzie, who was held up in traffic at the eighth pole and had to wait for a seam to present itself. With both in full flight by the sixteenth pole, the race was on in earnest, but Mitole dug in gamely to cross the wire first by three-quarters of a length.

"This is really a special horse," said Santana. "I can't explain how happy I am with this horse. He can come back, he can go in front, you can put him between horses and he always keeps trying his best. Today, we delayed as long as we can. He's a really amazing horse."

The win was Asmussen's second Grade 1 victory of the day. Earlier on the card he captured the Ogden Phipps with Midnight Bisou, and he nearly made it a hat trick with Nitrous, runner-up in the Woody Stephens.

"This win with this horse is so special," said Asmussen. "I'm thrilled for the Heiligbrodts, who have so much to do with the success that we have. Winning back-to-back editions of the Met Mile, I can't even put into words what this means. Today is what we had targeted, we know what this race meant, what a tremendous field it had. For him to come out on top against this field today under the pressure that he had, he proved what we believed in him the whole time. We're just so fortunate to be associated with this horse."

In addition to the winner's share of $650,000, the race, as part of the Breeders' Cup Challenge Series, earned Mitole an all-expenses paid trip to the Breeders' Cup Dirt Mile in November. He completed the mile in 1:32.75 and returned $9 on a $2 win wager.

"We weren't looking past today," Asmussen said of a potential date in the Dirt Mile. "Today was our target and for this horse to put it all together that way that he has so far this year is what we will enjoy. We will enjoy this victory and go back to Churchill for a couple of weeks and then regroup, and then go on from there."

Hall of Fame trainer Bob Baffert's McKinzie had to settle for a tough-luck second, finishing a neck in front of Thunder Snow. The Street Sense colt was turning back to a mile after a sensational score in the Grade 2 Alysheba on May 3 at Churchill, but Hall of Fame jockey Mike Smith couldn't get him into the clear in time, and the pair ran out of room late.

"We had a little traffic trouble and if he could have gone right instead of left, that would have been the way to go," said Baffert assistant Jim Barnes. "It's up to Mike [Smith] to make the right decisions. The horse showed up and he ran well. Credit to Steve Asmussen. His horse ran lights out, and ours did too."

Still without a victory on American soil, Thunder Snow again ran credibly over the Belmont main track, a surface on which he finished second by a neck in last year's Grade 1 Jockey Club Gold Cup. The Godolphin color-bearer finished 3 ¼ lengths clear of Promises Fulfilled in fourth.