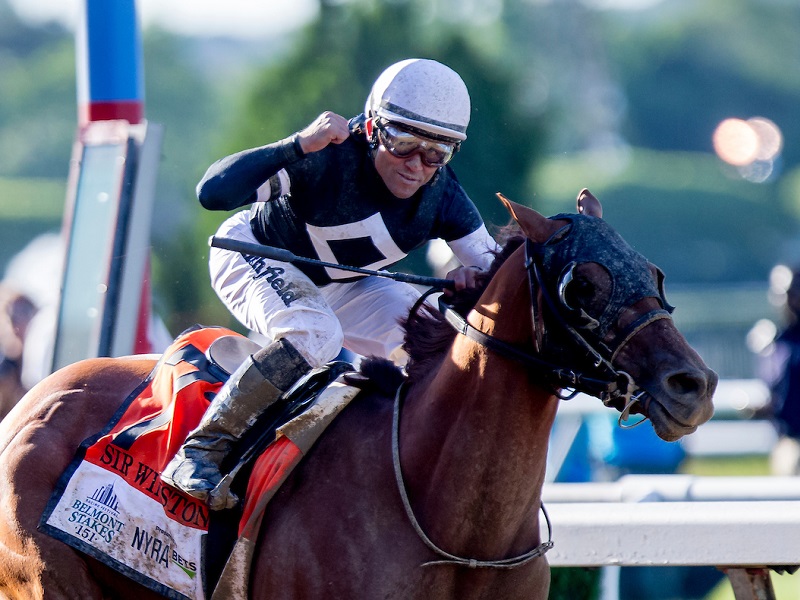 ELMONT, N.Y. - Tracy Farmer's Sir Winston rose to the challenge in his first start in an American Classic, overtaking pacesetter Joevia in the stretch and holding off 9-5 favorite Tacitus for a one-length victory in the 151st running of the Grade 1, $1.5 million Belmont Stakes on Saturday at Belmont Park.

Sir Winston's first career graded stakes win provided trainer Mark Casse his first victory in the "Test of the Champion" three weeks after stablemate and fellow Belmont contender War of Will won the Preakness to give Casse his first win in a Triple Crown race.

"He's an amazing little horse. If at this time last year, if you had asked me to rate our top-20 2-year-olds, he would have been about 16th or 17th. But I'm very proud of him because he's kind of what our operation represents, and that is I feel like we develop horses," Casse said. "I have this philosophy. I start every horse out thinking that they are going to win the Kentucky Derby, or the Oaks. That's what I do. And I will try different surfaces; I will try different methods. With a horse like Sir Winston, you know, it paid off there."

Jockey Joel Rosario patiently kept Sir Winston covered in eighth position out of the clubhouse turn as Joevia, the longest shot at 21-1, led the 10-horse field through the opening quarter-mile in 23.92 seconds and the half in 48.79 over the fast track in front of an announced crowd of 56,217.

On the backstretch, Tax kept close with Joevia, with three-quarters going in 1:13.54 and the mile in 1:38.27 as Rosario utilized a ground-saving trip. Finding an opening near the rail, Sir Winston was moved up to third out of the final turn and was tipped out, moving past Tax and Joevia from the outside as Tacitus, under Jose Ortiz, rallied from the outside. But Rosario kept to task on Sir Winston, completing the 1 ½-mile challenge in 2:28.30.

"He's a very nice horse and you have to let him do this thing. I'm really happy," said Rosario, who also won the Belmont when Tonalist ended California Chrome's Triple Crown bid in 2014. "It seemed like he didn't mind [being] inside. I just took my time with him. For the distance, he broke very good. Today, he was a little closer, so I let him be where he was comfortable."

Casse, a 10-time Sovereign Award winner for Outstanding Trainer in Canada who registered his first win in 1979, saddled a pair of entrants, with Gary Barber's War of Will as the 3-1 second choice. Instead, Sir Winston, whose best finish in a graded stakes came in a runner-up effort to Global Campaign in the Grade 3 Peter Pan last out on May 11 at Belmont, won while racing for the first time at longer than 1 1/8 miles. War of Will finished ninth.

Casse said War of Will and Sir Winston could both target the 10-furlong Grade 1, $1.25 million Runhappy Travers on August 24 at Saratoga Race Course.

"I tell you what, they all better watch out going to a mile-and-a-quarter because Sir Winston will come running, too. Sir Winston is a pretty serious horse, so don't count him out," Casse said.

"You didn't see the real War of Will today. I know that," Casse said. "So, we've got to get back and figure out what's up and why he didn't run better.

"As far as War of Will, first we'll have a couple days and make sure how he is. [We'll] probably send him back to Kentucky [and] give him a little break. The plan would be, and I would have to discuss it with Gary Barber, but we're going to aim him for the Travers.

"Again I'll talk to Mr. Farmer but I don't think there's much out there he would enjoy more than winning the Travers, so I'm sure he'll be all for that," he added.

Tacitus, the winner of the Grade 2 Wood Memorial in April at Aqueduct Racetrack, finished three-quarters of a length clear of Joevia for second, giving Hall of Fame trainer Bill Mott his second runner-up finish in the Belmont and first since Vison and Verse in 1999. Mott won the 2010 Belmont with Drosselmeyer.

"It looked like he kind of ducked in a little bit in mid-stretch at the eighth pole. He came running and finished up the race good, but it looked like he just got going too late," Mott said. "I probably shouldn't comment too much without seeing the rerun, but it was a little bit of a wide trip. We did have a bit of a wide trip, which you never like. He came running and looked like he was traveling better than anybody. We planned to try and be in contention at the quarter-pole and he was. He just couldn't get there."

Joevia, who gave New Jersey-based trainer Gregory Sacco his first Belmont starter, held strong in the stretch after setting a comfortable pace, outkicking Tax by a length to take third. It was the second straight strong performance for Joevia, who won the Long Branch at Monmouth Park on May 12 after being disqualified to 11th in the Wood Memorial for causing interference.

"That was quite a thrill. He's a really talented colt," Sacco said. "We knew the Wood wasn't any indication of his ability. He's a 3-year-old improving at the right time of the year.

"I didn't think he'd cave with those [slow] fractions," he added. "He showed a lot of tenacity. Maybe about the eighth pole, I think my blood pressure went through the roof. We knew he had to improve. We thought he would. Of course, training is one thing, but he put it all together last time in the Long Branch. It was in lesser company but he did it effortlessly. He had to step up to the plate today and he did."

Starters in the Wood Memorial comprised the second-through-fourth-place finishers in the Belmont, with the Danny Gargan-trained Tax completing the superfecta.

"I'm real proud of him. He ran big," Gargan said. "He'll move forward off this race. Obviously, when you run fourth in the Belmont, the Travers is in the back of your mind. This horse does his best running when he has eight weeks between starts, so we'll see where we're at."

The Japanese-bred Master Fencer was fifth, followed by Spinoff, Everfast, Intrepid Heart, War of Will and Bourbon War.