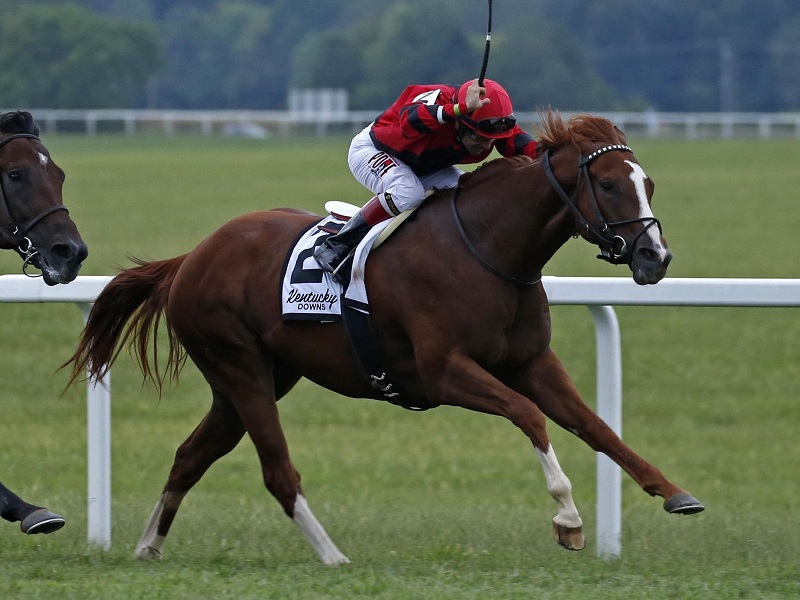 HALLANDALE BEACH, FL – DARRS, Inc.’s Proforma, already a graded-stakes winner on the turf, will attempt to duplicate that success on the dirt as part of a wide-open field of seven sprinters in Saturday’s $250,000 Smile Sprint (G3) at Gulfstream Park.

The Smile Sprint will mark Proforma’s debut at Gulfstream, his seventh consecutive start at a different track dating back to last summer at Monmouth Park. Winner of the 6 ½-furlong Kentucky Downs Turf Sprint (G3) last September, he is 0-for-2 in 2019.

“He’s just one of those horses that goes out there and gives you a big effort every time,” trainer Michael Stidham said.

Proforma ran third by a length in his seasonal debut, the 5 ½-furlong King T. Leatherbury Stakes April 20, won by Dirty in course-record time of 1:00.65. He returned to be second in the six-furlong Maryland Sprint (G3) on the undercard of the Preakness Stakes (G1) May 18 at Pimlico Race Course, beaten 1 ¾ lengths by New York Central, who ran a stakes-record 1:08.74.

“Numbers-wise his figures have been pretty comparable. His actual best number of his career was his last one, and that one was on the dirt,” Stidham said. “He won the Kentucky Downs Turf Sprint – that was a $500,000 race – so he’s obviously good on both surfaces. He’s training really well right now. We’re looking for a big effort from him.”

Albin Jimenez has the mount on Proforma (4-1) from Post 1.

Jacks or Better Farm homebred 3-year-old Garter and Tie, 7-2 and based at Gulfstream with trainer Ralph Nicks, has earned all three of his career wins over his home track, each of them in stakes, most recently a 10 ½-length romp in the 6 ½-furlong Ocala June 1.

Winner of the Florida Stallion Series’ Affirmed Stakes and one-mile Smooth Air as a juvenile, Garter and Tie was off the board in the Holy Bull (G2) and Florida Derby (G1) before being returned to sprinting. He was also nominated to the Carry Back.

“He’s in good shape,” Nicks said. “[The Ocala] was amazing. It was an amazing race. He just got into a huge rhythm and ran probably the best race of his life. We were very impressed, but it was impressive enough to wonder if he’s going to bounce a little bit. He’s put three nice races together, but it’s a bit of a concern.”

Jeffrey Sanchez, aboard for the past four races, gets the return call from Post 5.

Imaginary Stables and Glenn Ellis’ Royal Squeeze, unbeaten since being claimed for $25,000 Feb. 8 at Gulfstream, takes a four-race win streak into the Smile Sprint. Three of those victories have come in starter optional claimer company, but the 7-year-old gelding beat Garter and Tie by 1 ¼ lengths in the seven-furlong Big Drama Stakes for Florida-breds.

Overall, Royal Squeeze has earned 10 victories in 35 starts. Eight of those wins have come at Gulfstream, where he is three-for-four going six furlongs, including his last out triumph by a nose June 7.

“Last time he ran I expected him to pretty much open up on the field, and he didn’t,” trainer Elizabeth Dobles said. “I was a little concerned after the race, thinking that I might be kind of pushing my luck running him back and everything like that. Instead of breezing him, I wanted to have an easy race for him and that looked like a perfect spot. He ran a little quicker than I would have liked, but he seemed to come out of it OK.

“I don’t think there’s really any concerns with him. He’s doing the best he has been. We haven’t changed anything with him for him to go downhill. He can’t really improve much more than where he’s at now; he’s in his best form. The only thing I’m really concerned about with a race like that is the speed,” she added. “The last two races he went extremely fast. I wish I could get him settled a little bit behind a horse or two and then make his run, just so he’s not burned out toward the end of the race. He’s very fast.”

Paradise Farms Corp. and Walder Racing’s Fast Pass has been off the board once in seven career tries at Gulfstream since joining trainer Peter Walder’s string for the Claiming Crown, where he finished third in the six-furlong Express. The 6-year-old gelding has won his last two races, both in come-from-behind fashion, the latter by a length over Cautious Giant in the Open Lead Stakes May 26, also at six furlongs.

“Hopefully, there will be enough speed in front of him and he’ll do what he did last time,” Walder said.

Fast Pass will carry Miguez Vasquez, also up in the Open Lead, from Post 7.

Commonwealth Stable’s Jalen Journey, the 9-5 morning-line favorite, will be making his stakes debut having won three straight races at Gulfstream since early March by a combined 17 ¼ lengths for trainer Kathleen O’Connell. The 4-year-old With Distinction gelding has been on or near the lead in each of his wins, two with Championship Meet record-holder Luis Saez, who makes the trip in from New York to ride.

“I wish the race was a little longer because he’s a very long-striding horse, but I have a lot of faith in Luis so we’ll just go from there,” O’Connell said. “I’m real happy with him. At least we’ll be walking right out of the stall. Again, I’d be happier if it was a longer distance, but we’re walking into a stake in Florida in our own backyard and we have Luis, so we have two out of three. We’ll see if we can eke it out.”

Completing the field is Amy Dunne, Ivy Hui and trainer Patrick Biancone’s Diamond Oops, a two-time stakes winner on the dirt at Gulfstream as a 2-year-old in 2017, returning to the main track after a pair of turf sprints including a fifth behind World of Trouble in the Jaipur (G1) June 8 at Belmont Park.