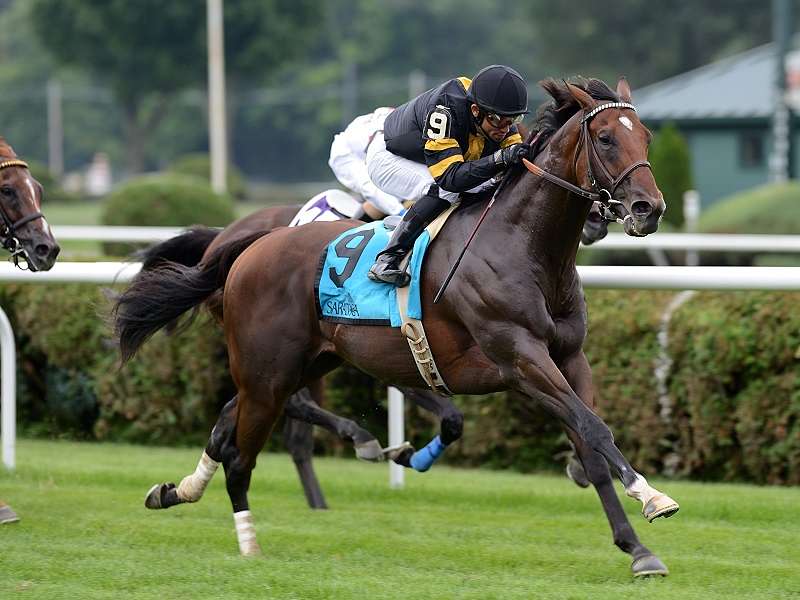 SARATOGA SPRINGS, N.Y. -- Green Mask and Holding Gold were game challengers, falling just short of a record-setting performance last out against graded stakes competition. The duo will look to build on those efforts, linking up again in Sunday's 13th running of the $250,000 Troy Handicap for turf sprinters on Saratoga Race Course's Mellon turf course.

Abdullah Saeed Almaddah's Green Mask and Live Oak Plantation's Holding Gold finished a half-length and length, respectively, behind Disco Partner, running 2-3 in the Grade 3 Jaipur on June 10, Belmont Stakes Day. Disco Partner, last year's Troy winner, set a six-furlong world-record of 1:05.67. The pair will now be part of a field of seven seeking a strong effort at the Spa.

Multiple graded-stakes winner Green Mask followed up his second in the Jaipur with a win in the Grade 2 Highlander at Woodbine on July 2. Trainer Brad Cox said he likes the way the 6-year-old Mizzen Mast gelding looks heading into Sunday.

"Yeah, he was good in the Jaipur. We were happy with him there," he said. "He has beat [most of] the horses in this race at one point, so I think he should be able to handle the competition and we are looking forward to him running on Sunday."

"He's been training extremely well," Casse said. "He got beat by a length and that's when they broke the world record. We gave him a bit of a break after that. He's won here going 5 ½. It's a [tough distance]. I wish it was three-quarters but a lot of it has to do with the track. I always have concerns, but it is what it is."

Hall of Fame jockey John Velazquez will ride from post 6.

Patricia Generazio's homebred Pure Sensation returns off a fourth-place finish in the Japiur, setting blistering fractions as the pacesetter before Disco Partner's run for the record books. The Christophe Clement trainee held the North American six-furlong record before Disco Partner's performance, setting the previous mark in the 2016 Jaipur.

"Pure Sensation has more natural speed [than Disco Partner]," said Clement, who also trains the world-record setter for Patricia Generazio. "The Troy should be a very good race. A tough race. I think he can be competitive with anybody, and I am excited to see him run."

Pure Sensation, a 6-year-old Zensational gelding, is coming off a win in the Grade 3 Parx Dash and will break from post 2 with Kendrick Carmouche in the saddle.

Mongolian Saturday, the 2015 Breeders' Cup Turf Sprint champion, who finished second in the Parx Dash, beaten 5 ¾ lengths, will break from the outside post for trainer Enebish Ganbat with Florent Geroux in the irons.

Third in the Parx Dash by a neck was Andrew Sulley's Bold Thunder. The Patricia Farro trainee will leave from post 8 with Paco Lopez in the saddle.

Rounding out the field is Watchel Stable's Long On Value breaking from post 2 for Hall of Fame trainer Bill Mott with Joel Rosario aboard.

Doctor J Dub and Weekend Hideaway are entered for main track only.