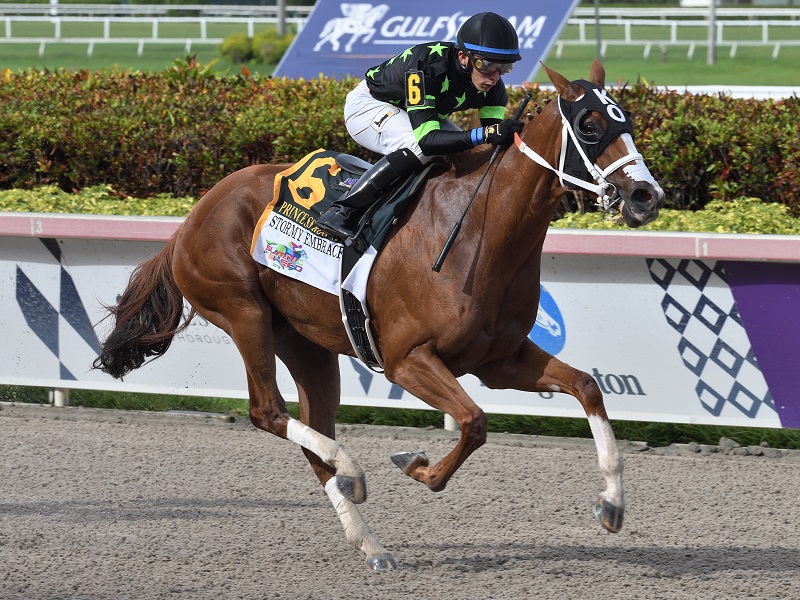 Stormy Embrace, who was sent to post as the 1-5 favorite, finished off the board in her Breeders’ Cup appearance last year at Churchill Downs, but the Kathleen O’Connell-trained mare been racing sharply this year.

“This business, sometimes you catch a buzz saw and sometimes you are the buzz saw. Thank God, with Kathleen and Wilmer, we were the buzz saw today. Plus, we wanted to go back [to the Breeders’ Cup] because we have unattended business,” said Matalona Thoroughbreds’ Matt Vuscovich. “She didn’t have a really good trip, got beat least 10 lengths in the race and the next time out she beat the winner – [Shamrock Rose] was behind her [in the Jan. 26 Hurricane Bertie (G3) at Gulfstream]. We feel if we can get a good trip in the Breeders’ Cup we can have a legitimate chance.”

Stormy Embrace broke alertly and settled nicely on the outside of dueling pacesetters Razorback Lady and Saguaro Row along the backstretch before making a move to the lead on the far turn with a three-wide move under Wilmer Garcia. The Matalona Thoroughbreds homebred edged away from the tiring pacesetters on the turn into the homestretch, where she was met with a strong outside challenge from Trenchtown Cat, who had rallied from mid-pack under Miguel Vasquez.

Stormy Embrace responded to her jockey’s urging and fought off the challenge while drawing away to a two-length triumph, her ninth success in 25 career starts.

“Wilmer knows her. God bless her, the best thing about her is she’ll do whatever you want. She’s got speed, but if you ask her she’s going to go overboard,” O’Connell said. “Wilmer’s got a great set of hands and he really fits her well.”

Trenchtown Cat, the only 3-year-old filly in the race, easily held second 5 ¼ lengths ahead of Royal Asscher.

Stormy Embrace ran seven furlongs over a good track in 1:22.99, giving her jockey a second chance to ride her in the Breeders’ Cup.

Garcia broke his foot shortly before Stormy Embrace ran in last year’s Breeders’ Cup, costing him the mount on the mare for five of her starts. But he was back aboard for her win May 18 in the Musical Romance Stakes at Gulfstream and again on Saturday.

“I’m back in business now,” said Garcia, who guided Stormy Embrace to a six-length victory in last year’s Princess Rooney. “Since I started working with her and working with Kathleen, she’s been doing everything right for me and we just want to keep that team together.”

Stormy Embrace, who rebounded from her lackluster showing at Churchill Downs, with a photo-finish loss in the Sugar Swirl (G3) and a third-place finish in the Hurricane Bertie before breaking through with a 10 ¼-length romp in the Musical Romance.

O’Connell, who has saddled nearly 2100 winners during her career, won’t look too far into the future, even though Stormy Embrace is in the field for the Filly & Mare Sprint.

“We’ll just see how it unfolds. She tells us what she needs and what to do. Like I say, she’s lasted a long time and mostly because [Matalona Thoroughbreds} are patient, wonderful people,” O’Connell said. “We go one race at a time and one day at a time. She’s holding her weight good. Her coat’s good. We’re happy with everything.”