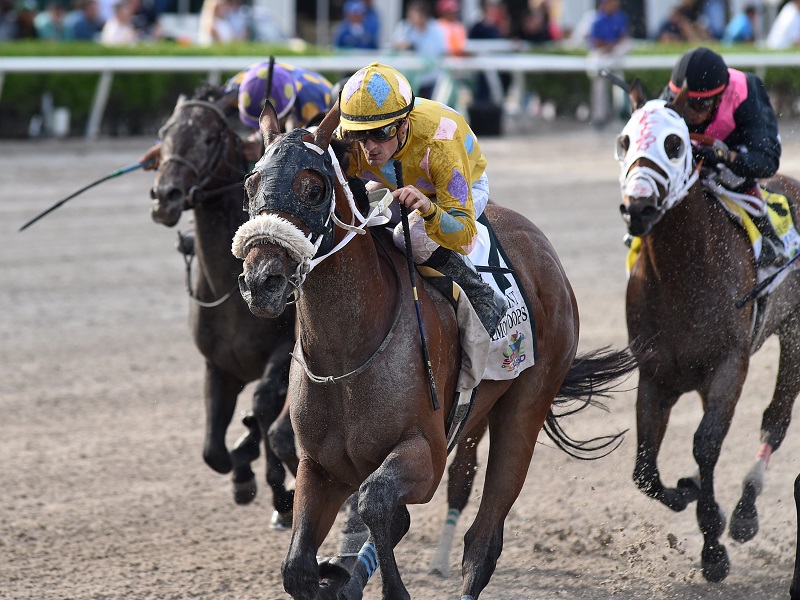 HALLANDALE BEACH, FL – Multiple stakes winner Diamond Oops, back on dirt after two failed tries over turf, came with a steady run on the far outside to reel in pacesetting favorite Jalen Journey and edge clear late for a three-quarter-length victory in Saturday’s $250,000 Smile Sprint (G3) at Gulfstream Park.

The Smile Sprint for 3-year-olds and up was the last of five stakes, two graded, worth $725,000 in purses on a 14-race Summit of Speed program headlined by the $250,000 Princess Rooney (G2), where Stormy Embrace defended her title and earned another all-fees-paid trip to the Breeders’ Cup Filly & Mare Turf (G1) Nov. 2 at Santa Anita.

With Julien Leparoux in town to ride for trainer Patrick Biancone, who also co-owns the winner with Diamond 100 Racing Club and Amy E. Dunne, Diamond Oops ($15.20) ran six furlongs in 1:09.92 over a main track rated good for his third career stakes triumph and first in graded company.

Sent off at 6-5 in the field of seven, Jalen Journey had his three-race win streak snapped in his stakes debut, staying up for second by 1 ½ lengths over late-running 25-1 long shot Fast Pass. Royal Squeeze, Garter and Tie, Proforma and Cautious Giant completed the order of finish.

“He broke very, very sharp and I kind of let the speed go a little bit,” Leparoux said. “I sat behind them around the turn. It got tight so he sort of stepped back a little, but when I gave him a little room he gave me a big run.”

Jalen Journey broke running from Post 3 and was intent on the lead under jockey Luis Saez, going the opening quarter-mile in 22.74 seconds while pressed to his outside by Royal Squeeze, who had won four consecutive races since being claimed for $25,000 in February. The top two went a half-mile in 45.31 as Cautious Giant, Fast Pass and Proforma bunched up behind them.

Once straightened for home, Saez set Jalen Journey down for a drive with Royal Squeeze glued to his flank. Leparoux had settled Diamond Oops near the back of the pack before gaining ground on the turn, tipping outside and closing steadily down the center of the track.

Leparoux also rode Razorback Lady to a fourth-place finish in the Princess Rooney for Biancone on a day that began with a thunderstorm bringing heavy rain and wind.

“You thought you were coming in to win with Razorback Lady, but it’s going to be the other way,” Biancone said he told Leparoux. “He said, ‘Why?’ I said, because [Diamond Oops] loves the wet and the other one hates it.”

A gelded 4-year-old son of champion Lookin At Lucky, Diamond Oops won the Kiss a Native and Buffalo Man stakes in the summer and winter of 2017 at Gulfstream Park, both on dirt. He made only one start in 2018 before returning in a pair of turf sprints this year, running third behind world-record holder Pay Any Price in the Crystal River Stakes May 27 at Gulfstream and World of Trouble in the Jaipur (G1) June 8 at Belmont Park.

Biancone indicated that Diamond Oops, now with four wins from eight lifetime starts, will stay on the main track.