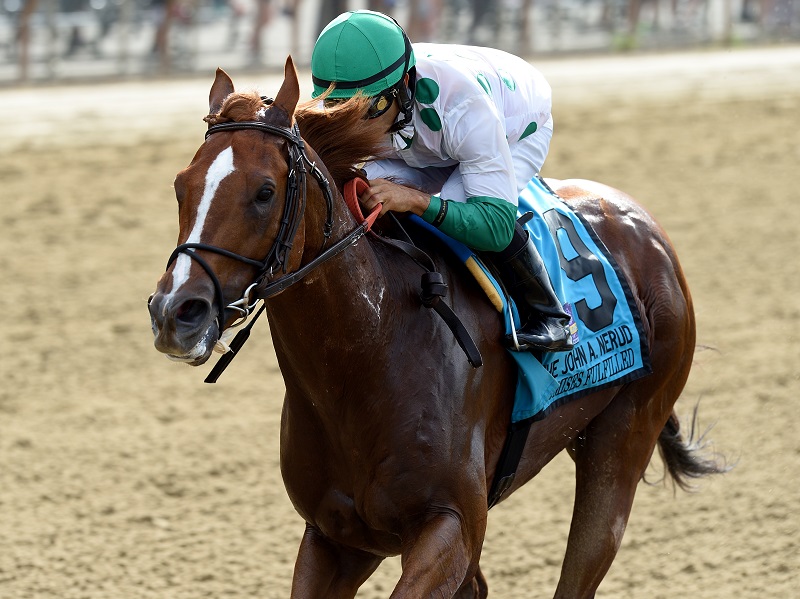 ELMONT, N.Y. - Robert Baron's Promises Fulfilled made every call a winning one en route to a 4 ½-length win in the Grade 2, $300,000 John A. Nerud, a "Win and You're In" qualifier for the Breeders' Cup Sprint on Stars & Stripes Racing Festival Saturday at Belmont Park.

Trained by Dale Romans and piloted by Luis Saez, Promises Fulfilled broke sharply and established a clear lead, marking the quarter-mile in 23.16 seconds and the half-mile in 46.09 under moderate pressure from Warrior's Club on the fast main track.

Killybegs Captain, who stumbled at the break, advanced with a wide move approaching the turn as Warrior's Club turned up the pressure on the pacesetter.

Promises Fulfilled, under a hold by Saez, was asked for his best at the top of the lane and demonstrated a powerful turn of foot to turn back Killybegs Captain and kicked clear, stopping the clock in 1:21.75. Warrior's Club dug in down the lane to regain second by a neck from the game Killybegs Captain.

Nicodemus, Bon Raison, Do Share and New York Central completed the order of finish. Majestic Dunhill and Pat On the Back were scratched.

Saez was full of praise for the millionaire chestnut's effort down the lane.

"He broke so sharp. He always breaks sharp. The last time, he missed the break, but today he broke so clean, he was right there," said Saez. "When he came to the stretch, and he switched leads, he was running. I still had a lot of horse. It's very hot today. He got a little tired when he crossed the wire, but that's normal."

Promises Fulfilled competed in four consecutive Grade 1 events ahead of the Nerud, finishing fourth in the 2018 Breeders' Cup Sprint, and fourth again in both the Dubai Golden Shaheen and last out in the Runhappy Metropolitan Handicap at Belmont. The Shackleford chestnut was third in the Churchill Downs in May.

"It didn't look like there was much speed and when [Killybegs Captain, No. 5] missed the break, that left him out there. He was going to be hard to beat if no one pressed him. He hadn't had that slow of a pace in his life," said Romans. "Look at the horses he's been running against; this race finally gave him a bit of class relief. But this should set him up well.

"Where we go next, we'll have to sit down and figure it out," added Romans. "He can make a mile. There's just a good group of horses running three-quarters and a mile. We'll get that all figured out."

Formerly the Belmont Sprint Championship, the Nerud was renamed in honor of the late Hall of Fame conditioner, who trained such legends of the sport as Dr. Fager and 1957 Belmont Stakes winner Gallant Man. In 1968, Dr. Fager became the only thoroughbred to win four Championships in one year: Sprinter, Turf Horse, Handicap Horse and Horse of the Year.

A founding member of the Breeders' Cup, Nerud served as chairman of the Breeders' Cup marketing committee in its early years. The longtime trainer, president and general manager for William L. McKnight's Tartan Farms passed away in 2015 at the age of 102.

Bred in Kentucky by David Jacobs, Promises Fulfilled banked $165,000 in victory while improving his record to seven wins and three thirds from 15 starts. He paid $3.30 to win as the 3-5 mutuel favorite.