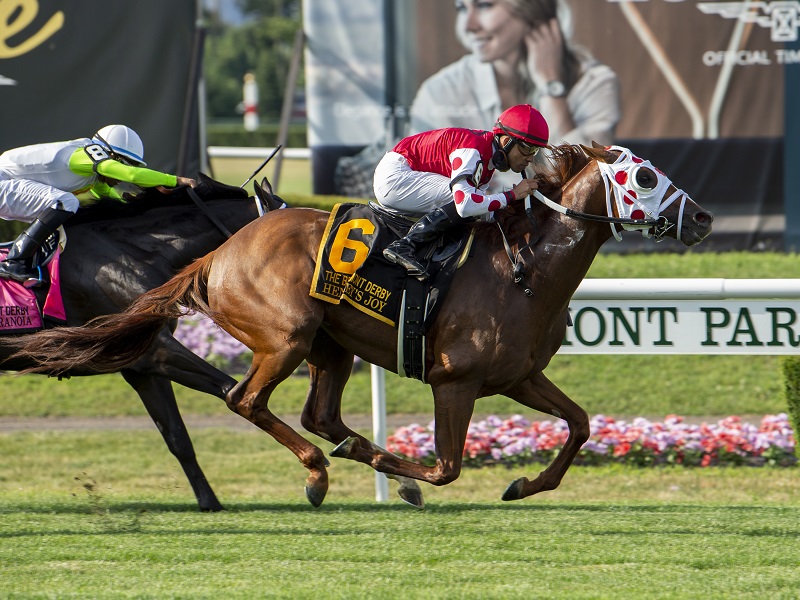 ELMONT, N.Y. - Bloom Racing Stable's Henley's Joy was briefly on the Kentucky Derby trail earlier this year. But the Kitten's Joy colt instead made his mark on a different Derby contested at 1 ¼ miles, this one on turf, overtaking Social Paranoia from the outside and closing strong for a three-quarter-length victory in the 70th running of Saturday's Grade 1, $1 million Belmont Derby Invitational to highlight the Stars & Stripes Racing Festival at Belmont Park.

One of five graded stakes on the loaded card, the Belmont Derby, the first leg of the Turf Trinity, served as the opener for the New York Racing Association's Turf Triple series, offering $5.25 million in purse money for sophomores over three legs at Belmont and Saratoga Race Course.

Henley's Joy, whose 2-year-old campaign included a runner-up effort in the Grade 3 Bourbon before a 13th-place finish in the Grade 1 Breeders' Cup Juvenile Turf, was moved off the turf for one race by trainer Mike Maker for the Grade 2 Risen Star in February at Fair Grounds. After running 10th in the Kentucky Derby prep, Maker switched the Kentucky bred back to grass, where he ran second in the Grade 3 Transylvania on April 5 at Keeneland.

On Saturday, the move back to grass proved prescient as the 20-1 shot broke well and was forwardly placed, covered in third position as Moon Colony led the full 14-horse field through an opening quarter-mile in 23.31 seconds and the half in 47.80 on the firm inner turf.

Out of the far turn, jockey Jose Lezcano kept Henley's Joy to the inside before tipping him out, where he passed Moon Colony before overtaking Social Paranoia in the final furlong and outkicked his challenger, hitting the wire in 1:58.29.

"It's such a big race to win and it's so important, but for this particular horse, he's had the worst racing luck and he's just been so honest, so many rough trips, it was just so gratifying to see him be able to show everybody how talented he is," said winning owner Jeffrey Bloom. "He's had so many near misses in situations where things didn't go right and he answered the call today in a big spot."

Henley's Joy, bred in Kentucky by Ken and Sarah Ramsey, registered his first graded stakes win in seven attempts, returning $43.60 on a $2 win wager. His winner's share of $535,000 nearly earned him millionaire status, with his career earnings soaring to $953,160.

"It was great," said Maker assistant Nolan Ramsey. "I was kind of expecting it. He's a horse I hate to make excuses for, but it seems like every race he's got some sort of excuse. Today, he got the perfect ride and a clean trip and he really relished the distance.

"He shows up. He's very consistent," Nolan added. "He's never really run a bad race. We knew a mile and a quarter would fit him, so we were confident going in, but obviously it was a really tough field so we knew he needed a clean trip, and that's what he got."

Lezcano won his fifth graded stakes of 2019 and tallied his first Grade 1 victory since piloting Voodoo Song to the 2018 Fourstardave Handicap at Saratoga.

"The horse seemed very comfortable," Lezcano said. "Around the backside, I was a little worried he was kind of jumping off the bridle. When I asked him to take off, it was easier because of how he broke out of the gate."

At 16-1, the Todd Pletcher-trained Social Paranoia completed the high-priced exacta, finishing a half-length ahead of the Irish-bred Rockemperor for second.

"I got the trip that I wanted," Franco said. "The horse responded to me every time that I asked. I just got beat by a better horse. This is the second time that I've been on him and he ran great for me. I could not ask for more."

"Very good effort he just didn't break good enough to be closer up front," Hall of Fame jockey John Velazquez said. "Following the start, he came out with a good run and finished up well."