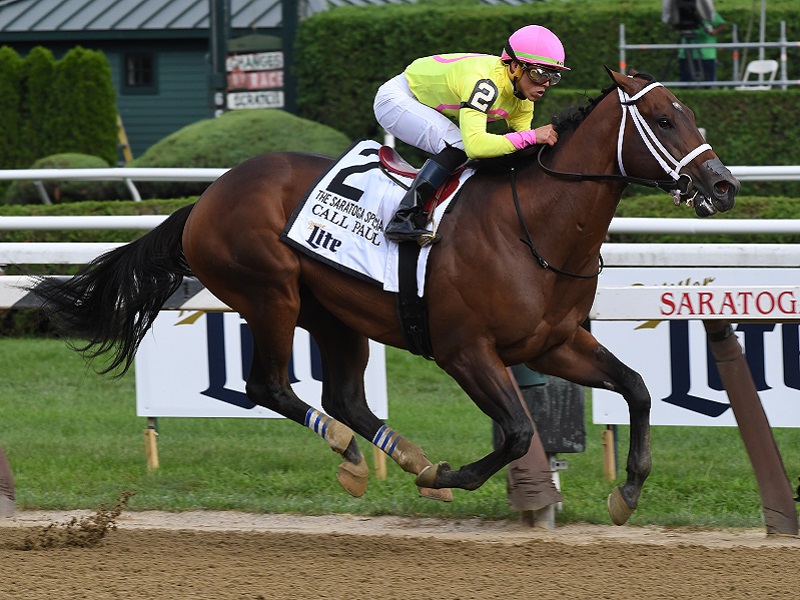 SARATOGA SPRINGS, N.Y. - A competitive field of 3-year-old turf sprinters is lined up for the Grade 3, $100,000 Quick Call on Thursday, Opening Day at Saratoga Race Course, led by Call Paul, a multiple graded stakes winner who will be making his turf debut in the race for potent grass trainer Jason Servis.

The 5 ½-furlong Quick Call on the Mellon turf will join the Grade 3, $150,000 Schuylerville in kicking off the graded stakes action for the 40-day Saratoga meet, which will run from July 11 to September 2 with racing being conducted five days a week, Wednesday to Sunday, except for a special Labor Day Monday card to close out the meet.

The ultra-consistent Call Paul, who has yet to finish out of the money in nine career starts, burst onto the landscape last year with a one-length victory in the Grade 2 Saratoga Special. Following a pair of third-place finishes in the Grade 1 Champagne and Grade 3 Nashua on the NYRA circuit, the bay colt closed out his juvenile campaign with a five-length win over Pennsylvania-breds in the Pennsylvania Nursery on December 1 at Parx Racing.

The son of Friesan Fire returned triumphant in the Grade 3 Swale on February 2 at Gulfstream Park, and finished third in the Grade 3 Bay Shore and second in the Gold Fever Stakes before dominating state breds again in the Danzig Stakes on June 1 at Penn National in his most recent start.

To date, Call Paul has earned $474,520 for Michael Dubb, David Simon, Bethlehem Stables and David Irom. He will be ridden by Manny Franco from post 6.

Prominent turf sprint stakes trainer Wesley Ward will saddle Abyssinian, for owner Hat Creek Racing. The gray filly will be meeting her male counterparts for the second time this year, having already finished third in the Palisades Turf Sprint on April 4 at Keeneland, and is coming off a runner-up finish in the Mamzelle on May 11 at Churchill Downs. In her 2019 debut, the daughter of Cairo Prince smashed a field of optional claimers by 6 ¾ lengths on February 28 at Gulfstream.

Abyssinian will break from the rail with Hall of Famer John Velazquez aboard.

"We took on the boys before at Keeneland and she was a bit compromised in the race," Ward said. "She hopped at the start and Johnny rushed her up to get position. She really didn't have that same finish as she did down in Florida, though she was running against much easier company there. I thought she still ran a real credible race against a quality horse, a Breeders' Cup winner.

"She's doing great coming into the race," Ward added. "We're also considering the Coronation Cup, but the Quick Call is very tempting since it's a Grade 3 and those opportunities don't come up often for turf sprinters. She's got proven turf sprint form and I think she's got a chance."

Listing, trained by Ben Cecil for Reddam Racing, will venture east for the Quick Call on the heels of an authoritative win in the Desert Code  on June 9 at Santa Anita Park. The bay homebred is nearly undefeated in turf sprints having already won the California Cup Turf Sprint  against state breds on January 26 and missing by a nose in a Cal-bred optional claimer on January 1, both on the downhill course at Santa Anita. He will enlist the services of jockey Joel Rosario from post 4.

The hard-knocking Gladiator King will go out for trainer Jamie Mejia and Thoroughbred Champions Training Center. A chestnut son of Curlin, Gladiator King has already made nine starts in 2019 and has excelled primarily on dirt, having picked up stakes victories in the Grade 3 Hutcheson, the Roar, and the Inaugural on the main track, but he also boasts two wins on turf going five furlongs. In his most recent outing, the Mejia trainee finished fifth beaten 13 ¼ lengths in the Ocala Stakes on June 1 at Gulfstream Park.

Jose Gallego will be aboard Gladiator King, breaking from post 3.

A perennial contender for Saratoga's training title, Todd Pletcher will be represented by Sombeyay, winner of last year's Grade 3 Sanford at the Spa. The Into Mischief colt's form tailed off at the end of his juvenile season and his sophomore debut, a distant fifth-place finish in the Gold Fever Stakes at Belmont, wasn't any more encouraging, but he bounced back in a big way last time, finishing second by a nose in the Lookin At Lucky on June 2 at Monmouth Park with an 86 Beyer Speed Figure.

The Quick Call will mark Sombeyay's first start on the lawn. He will break from post 10 with Luis Saez in the irons.

Rounding out the field are the Linda Rice-trained pair of Elektronic and Mount Travers; Fully Loaded, who will make his turf debut for trainer Ralph Nicks; main-track only entrant Releasethethunder and Neverland Rock, most recently second and third, respectively, in an optional claimer at Belmont Park; and Dunph, a stakes winner on dirt trained by Mike Maker for Three Diamonds Farm.

The Quick Call is carded as Race 9 as a part of Thursday's 10-race card. First post is 1 p.m. Eastern.