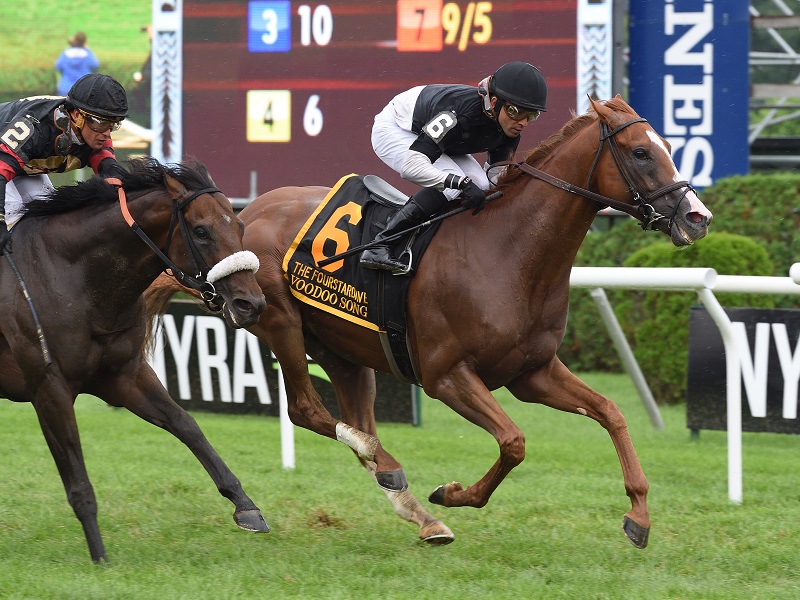 Trained by Linda Rice, the New York-bred son of English Channel hasn't raced since finishing 12th in the Grade 1 Shadwell Turf Mile at Keeneland last October, but has recorded a strong series of works over Belmont Park's inner turf, most recently a five-furlong work in 1:00.80 on Sunday morning.

"I was pleased with his work [Sunday]," Rice said. "We have been trying to have him ready for this race but was concerned because he was a little heavy, but his work was very encouraging."

Voodoo Song, who won last year's edition of the Forbidden Apple, has won 5-of-6 starts over the turf at Saratoga, including the Grade 1 Fourstardave last August where he beat Grade 1 winners Delta Prince and Divisidero. As a 3-year-old, he won the Grade 3 Saranac over eventual Grade 1 winners Yoshida and Bricks and Mortar.

Voodoo Song brags the highest amount of lifetime earnings in the field, banking $883,435 with a record of 8-2-1 in 18 career starts.

Jockey Jose Lezcano will pilot Voodoo Song who will leave from post 7.

Qurbaan has not won since that race but has placed three times against Grade 1 company, including a close second to Bricks and Mortar in the Grade 1 Old Forester Turf Classic at Churchill Downs in May.

Trainer Mark Casse will saddle a pair of contenders with March to the Arch and First Premio, the former of which won the Grade 2 Wise Dan in his most recent start.

Owned and bred by Live Oak Plantation, March to the Arch upset the Wise Dan at 10-1 odds where he earned a career best 98 Beyer Speed Figure. Prior to a fifth-place finish in the Old Forester Turf Classic, he won his 2019 debut in the Turf Classic for Florida-breds at Tampa Bay Downs. His only other stakes win took place at Woodbine in last year's Toronto Cup.

Tyler Gaffalione will pilot March to the Arch from post 5.

Casse also will send out First Premio, who breaks from post 2 under Jose Ortiz. The Team Valor-owned son of Pure Prize was fifth behind stablemate March to the Arch in the Grade 2 Wise Dan last out. He made his 2019 debut a winning one in the Colonel E.R. Bradley at Fair Grounds in January, which he won off a seven-month layoff.

Chad Brown ended the Belmont spring/summer meet as the runaway leading trainer, and will look to carry that over to Saratoga when he saddles Offering Plan and Made You Look.

Owned by Michael Dubb and Nantucket Thoroughbred Partners, the 7-year-old Offering Plan will make his 26th career start and seeks his first graded stakes victory. The New York-bred son of Spring At Last has scored three times in stakes against fellow Empire State-breds and won against open company in the English Channel at age 3. He last raced when running third in the Kingston on May 27 behind eventual graded stakes winner Gucci Factor.

Jockey Javier Castellano will be aboard, breaking from post 4.

Brown also will send out Three Chimneys Farm's two-time graded stakes winner Made You Look, who makes his first start of the year and seeks his first win at such caliber since the 2017 Grade 3 Dania Beach at Gulfstream Park. The son of More Than Ready previously raced for trainer Todd Pletcher but was moved to Brown after his current owners acquired him from the 2017 Keeneland November Mixed Sale. He won his first start for Brown when defeating stakes winners Inspector Lynley and Aquaphobia last May over Belmont Park's inner turf.

Breaking from post 6, Made You Look will be ridden by Irad Ortiz, Jr.

The Forbidden Apple is named in honor of Arthur Appleton's four-time graded stakes winning millionaire who ran 31 times and retired at age 8. The Christophe Clement-trained son of Pleasant Colony won the Grade 1 Manhattan in 2001 and went on to run second in that year's Grade 1 Breeders' Cup Mile.

First post on Friday's 10-race card is 1 p.m., with the Forbidden Apple slated as Race 9.