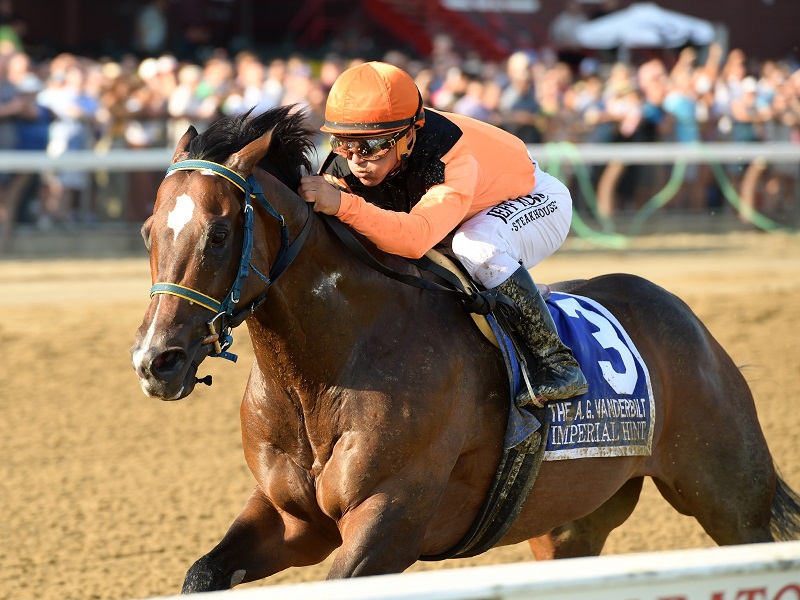 SARATOGA SPRINGS, N.Y. - Making only his third start of the year and first since finishing third in the Group 1 Golden Shaheen at Meydan Racecourse in March, multiple Grade-1 winner winner Imperial Hint successfully defended his title in the Grade 1, $350,000 Alfred G. Vanderbilt on Saturday at Saratoga Race Course and set a new track record in the process.

Imperial Hint, breaking from post 3 at odds of 5-1 and carrying 123 pounds with Hall of Famer Javier Castellano in the irons, tracked from third position as 1-2 post-time favorite Mitole and Strike Power battled up front, with the latter marking the opening quarter-mile in 21.77 seconds on the fast main track.

Making a sweeping three-wide move, Imperial Hint overtook the pair in front to mark the half in 44.21 and extended away to best the six-horse field by four lengths at the wire.

He completed the six-furlong distance in a final time of 1:07.92, besting the previous track record for the distance of 1:08.04 held by Spanish Riddle and Speightstown.

"He's an amazing horse," said Castellano. "He did it again. It's very impressive. He did this last year in the same race. It's unbelievable. He's a very good horse and I always have a lot of confidence in him. He's a little horse with a big heart. He's not a huge horse, but he has a lot of talent.

"I knew they were going pretty quick early in the first part of the race. I had a perfect position in the race tracking them. Turning for home, the way he did it was very impressive. He wanted to go. He was feeling good and gave me everything he had today."

Returning $13.60 for a $2 win wager, the 6-year-old son of Imperialism bred by Shade Tree Thoroughbreds boosted his career earnings to over $2 million with the victory to total $2,034,155 for winning owner Raymond Mamone and trainer Luis Carvajal, Jr.

"I got to give credit to owner Raymond Mamone," said Carvajal, Jr. "He had a feeling that he was going to do well in this race, even though we thought he was a little short because we lost a week of training with the weather back in New Jersey, but he was right. This horse keeps surprising me and surprising everybody.

"We were worried a little bit. Mitole is a very nice horse," added Carvajal, Jr. "He won all of those races in a row [seven]. It's an amazing feeling. I couldn't believe what was going on around the turn, but he's a really good horse. He has a lot of heart. He doesn't have a big body, but he has a lot of heart."

Charging with a late rally, 29-1 longshot Diamond Oops bested Mitole for second, finishing 3 ½ lengths ahead of the beaten favorite. Firenze Fire came in fourth followed by Strike Power and Do Share.

"The track inside wasn't too good for us with the post [No. 1] and the weight [125 lbs]," said Ricardo Santana, Jr., rider aboard Mitole. "My horse ran hard. He's a hard-trying horse. I just took my chance, but we'll see him in the next race."

Firenze Fire, Strike Power and Do Share completed the order of finish.