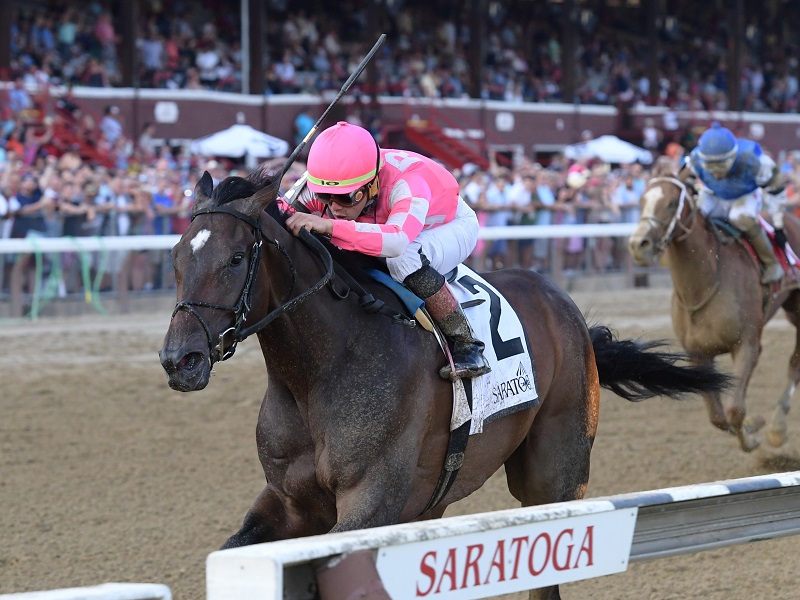 Trained by Danny Gargan, the dark bay son of Arch was claimed for $50,000 out of a maiden-breaking effort at Keeneland on October 21. Tax has contested six consecutive graded races since, including two-thirds of the Triple Crown, winning the Grade 3 Withers and finishing fourth last out in the Grade 1 Belmont Stakes presented by NYRA Bets.

Sent to post as the 9-2 fourth choice in the six-horse Jim Dandy field, headed by Grade 1 Preakness-winner War of Will and Grade 2 Wood Memorial presented by NYRA Bets victor Tacitus, Tax broke alertly but allowed War of Will to set the opening quarter-mile in 24.89 seconds on the fast main track.

Tacitus, the 8-5 mutuel favorite under Jose Ortiz, stumbled out of the gate and trailed the field as War of Will marked the half in 48.80 with Tax tracking comfortably in second, with Global Campaign and Laughing Fox following.

War of Will opened up down the backstretch and led the field into the final turn as Tacitus started to pick off horses one-by-one up the rail. Ortiz, Jr., poised to strike aboard Tax, gave the gelding his cue late in the turn and angled the former claimer outside of the tiring front-runner.

Tax emerged with a two-length lead at the stretch call as Tacitus left the rail to overtake War of Will and take aim at Tax. Tacitus dug in gamely on the inside to be level with Tax inside the final sixteenth, but there was no denying Tax, who continued to find more to earn a three-quarter length win in a final time of 1:49.28. Global Campaign completed the trifecta, 3 3/4-lengths in front of Laughing Fox. War of Will and Mihos rounded out the order of finish.

"When the speed horse [Global Campaign] didn't break that sharp, I changed my plan," said Ortiz, Jr. "I just decided to go. I told myself, 'I don't want to be down on the rail.' When I got outside in the clear, I held it. That was my plan. I didn't want to be inside. I thought I was going to have the other horse as a target, but he didn't break, so I decided to go. We never expected War of Will to be in front."

Tax, who battled with Joevia on the lead in the Belmont Stakes, found a more relaxed trip in the Jim Dandy.

"Today, it felt much better than last time," said Ortiz, Jr. "When I let him run, he picked it up. I let him go and when I asked and said, 'Let's go,' he was feeling great."

"I was thinking to be very aggressive today on him going into the first turn. I wanted to break good and make everybody use a little bit at the first sixteenth of a mile," said Ortiz. "Unfortunately, he stumbled and after that, I used him a little bit just to bring him up to the field and when we passed the five-eighths pole, I saw an opening on the inside with War of Will at the front. I decided to let him go and let him catch up with the leaders a little bit by the half mile. The rail opened for me by the three-eighths pole. I felt like it was too early to take that chance. I think the stumble cost me a lot, for sure."

The upwardly-mobile Tax finished third in the Grade 2 Remsen in December at Aqueduct Racetrack ahead of his Withers score. Following a runner-up effort to Tacitus in the Wood Memorial, Tax posted the only off-the-board effort of his career when placed 14th in the Grade 1 Kentucky Derby.

Gargan said Tax is likely to make his next start in the Grade 1, $1.25 million Runhappy Travers on August 24 at the Spa.

"[It] is the goal, so hopefully if he comes out of this well, we're in the Travers," said Gargan. "I think he likes this track and he likes it here, so that's something we're pushing towards and hoping we make. It's a wide-open division, he was unfortunate a couple of times. The Derby was a throw-out race because of the way the break went and the way the track was. If you take the Derby out, he's run as good as anyone all year. With the right trip and the right situation, he can be right there."

Tax, bred in Kentucky by Claiborne Farm and Adele B. Dilschneider, banked $330,000 in victory while improving his record to 3-2-1 from eight starts. He paid $11 to win.