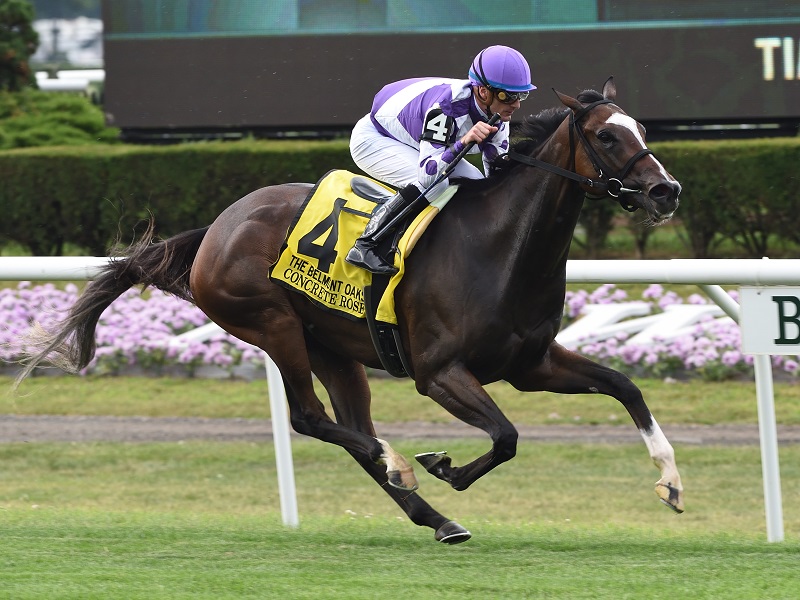 The Turf Triple, featuring the Turf Trinity for 3-year-old males and the Turf Tiara for sophomore fillies, kicked off with the Grade 1 Belmont Oaks Invitational, which Concrete Rose won in surging 2 ¾-lengths clear of Just Wonderful at 1 ¼ miles on July 6. That marked the third consecutive win for the Rusty Arnold trainee, who has earned a trip to the winner's circle in five of her six career starts.

The Twirling Candy filly won her debut last August in a 5 ½-furlong turf sprint at the Spa and followed with a three-length win in the Grade 2 Jessamine in October at Keeneland. She capped her 2-year-old year with her only off-the-board finish, running eighth in the Grade 1 Breeders' Cup Juvenile Fillies Turf in November at Churchill. After a four-month freshening, Concrete Rose has not been beaten, taking the Grade 3 Florida Oaks in March at Tampa and the Grade 3 Edgewood in May at Churchill, both at 1 1/16 miles, before stretching out in distance to win the Belmont Oaks on firm turf.

A contender for divisional honors, Concrete Rose will be running at 1 3/8 miles for the first time in the middle jewel of the Turf Triple. The series' conclusion will take place with the $750,000 Jockey Club Oaks Invitational on September 7 at Belmont.

"Right now, she is [the best 3-year-old turf filly in the country], but we're halfway through the year and hope we continue on," Arnold said. "She won at five-and-a-half furlongs, a mile-and-a-quarter and in the middle, so it's not an issue. I think the mile and three sixteenths is well within her ability."

Jockey Julien Leparoux, aboard for all three wins this year, will have the return call from post 5.

Saratoga leading trainer Chad Brown will saddle Olendon, who made her North American debut in the Belmont Oaks, finishing eighth. Prior to that, the French-bred Le Havre filly won two races with a runner-up effort in six starts in her native country.

Owned by Wonder Stables, Madaket Stables, Michael Dubb, Chris Mara and Robert Masiello, Olendon was second in the Group 1 Prix Saint Alary in May at Longchamp before arriving to the United States.

Irad Ortiz, Jr. will pick up the mount from post 1.

Albert Frassetto's Her Royal Highness will be taking a step up in class following her best stakes effort, running second to Valiance in the Open Mind at 1 1/16 miles on June 30 at Monmouth Park.

After making her first four starts on the main track, trainer Graham Motion moved her to the grass in March, where she ran seventh in the Grade 3 Florida Oaks. After finishing out of the money in both the Memories of Silver [fifth] in April at Aqueduct and the Boiling Springs [fourth] in May at Monmouth, Her Royal Highness earned a career-best 82 Beyer Speed Figure in the Open Mind.

"She's been a little unlucky. She had a little bit of trouble two starts back at Monmouth. She probably should have hit the board in that race," Motion said about the Boling Springs. "She was running very well at the end last time. I think she handled the dirt, but she's risen to another level on the grass."

After making her last four starts at 1 1/16 miles, she will be stretching out to the Saratoga Oaks distance for the first time. She will arrive at the Spa from her training base in Fair Hill, Maryland.

"She's doing great and I plan to breeze her before shipping her up to Saratoga on Tuesday," Motion said. "I always thought [about stretching her out]. We'll find out, but it's always been on mind. She can be a bit of a tough filly to be around, but I think she'll handle it."

Joel Rosario will pick up the mount, breaking from post 6.

The Saratoga Oaks will feature a pair of European shippers for trainer Aidan O'Brien, with Coral Beach returning to the U.S. for a second time after running seventh in the Belmont Oaks. The Irish-bred filly has won twice in 18 career starts, including the Grade 3 Killavullan in Dublin's Leopardstown in her home country last October.

O'Brien will also send over Happen, who raced three times as a juvenile, breaking her maiden at third asking in October at Leopardstown. Following a six-month break, she started her sophomore year back at Leopardstown with a runner-up finish in the Group 3 Priory Belle in April before winning the seven-furlong Group 3 Coolmore Gleneagles Irish EBF Athasi over good-to-yielding turf on May 6.

One month later, she stepped up in class, finishing sixth in the Group 1 Coronation at Royal Ascot on June 21. She will now make first North American start, having accomplished international jockey Ryan Moore in the irons from post 2.

Kelsey's Cross, owned by Sanford Bacon and Patrick Biancone, her trainer, has finished in the money in each of her four starts. Bred in Florida by T. Wynn and Mary Jolley, Kelsey's Cross did not race until April, when she ran second in her debut on April 21 at Gulfstream before breaking her maiden at second asking on May 19 over the same track.

Stepping up in class, she ran third in both the Grade 3 Wonder Again and the one-mile Martha Washington on July 6 at Gulfstream.

"She shows up and she's improving. We gave her plenty of time before we started to run her. Now, she has great form," Biancone said.