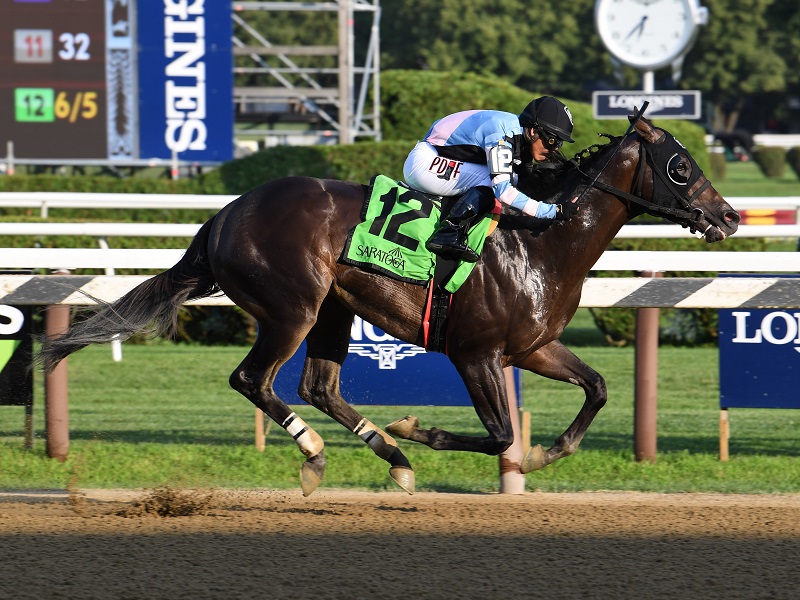 SARATOGA SPRINGS, N.Y. - Shancelot broke sharply from the outside and set torrid opening fractions, but was able to shine brightly in his stakes debut when waltzing home under a hand ride by Emisael Jaramillo in Sunday's Grade 2, $200,000 Amsterdam at Saratoga Race Course.

Breaking to the far outside in the 12-horse field, Shancelot went straight to the front with 54-1 longshot Classy John to his inside while recording the opening quarter in 21.79 seconds on the main track labelled fast. Approaching the far turn, Shancelot extended his lead considerably, while throwing down the half-mile in 43.94 seconds. Jaramillo began to ask a bit more of his horse late in the turn, opening up a 12-length advantage at the stretch call, but the race was already over by that point with Shancelot crossing the wire 12 1/2 lengths clear. He completed the 6 ½-furlong journey in 1:14.01.

Nitrous closed late to get second with Honest Mischief rounding out the trifecta. Two-time winner Super Comet broke poorly from the gate and was well off the pace, but made up enough ground to round out the superfecta.

Completing the order of finish were The Big S, Bourbon Calling, Achilles Warrior, Lemniscate, Garter and Tie, Wendell Fong, and Strike Silver. Classy John was eased in the final furlong and did not finish.

Owned by Ivan Rodriguez, Albert Crawford and Michelle Crawford, the sophomore son of Shanghai Bobby completed six furlongs of the race in 1:07.63, which was faster than the track record of 1:07.92 for three-quarters of a mile that was set by Imperial Hint in Saturday's Grade 1 Alfred G. Vanderbilt.

"Wow. To say what I said a month ago, that this is the best horse I've ever trained," Navarro said. "Private Zone was good. Sharp Azteca was good. X Y Jet is still good - going into the race, I knew he was running against some good horses, I thought, 'Am I going to be wrong?' I guess not.

"The jockey jumped off and said, 'Jorge, this was just a workout'," Navarro continued. "He said, 'I had so much in the bottom.' I've never seen anything like it in my life."

Shancelot will likely return to the Spa for the Grade 1, $500,000 H. Allen Jerkens Memorial presented by Runhappy - one of six Grade 1 races carded for the Travers Racing Festival.

"If everything comes out good, that's where we'll end up," Navarro said. "We'll go through everything with him, make sure everything is fine. That's our plan."

Shancelot has led at every point of call in his three career starts. Prior to winning the Amsterdam, he broke his maiden at Gulfstream Park in narrow fashion over Grade 1 Kentucky Derby and Preakness runner Bodexpress. He then defeated winners at Monmouth Park by 6 ¼ lengths while registering a 100 Beyer Speed Figure.

Bred in Kentucky by Charles Muth and Patrick Murphy, Shancelot was acquired for $245,000 from the Ocala Breeders Sales Company's 2-Year-Olds in Training Sale last March. He is out of the stakes-winning Is It True broodmare True Kiss.