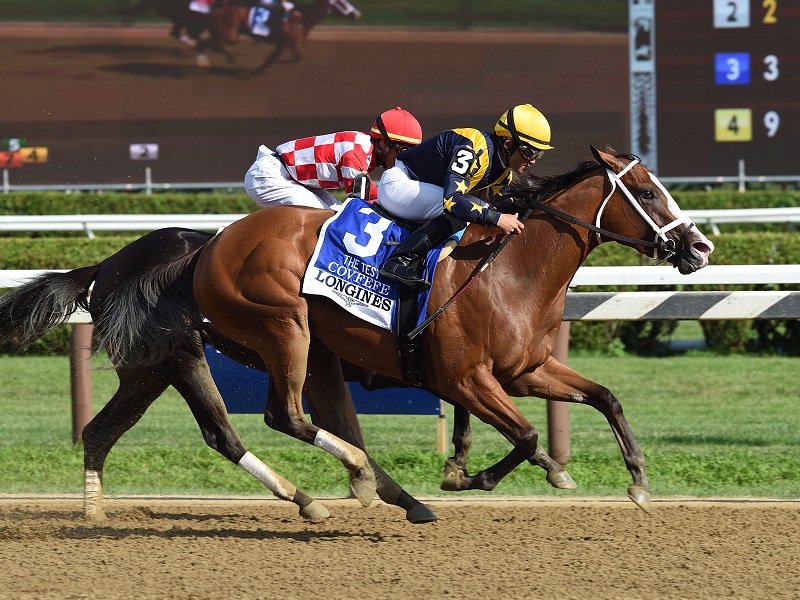 SARATOGA SPRINGS, N.Y. - Covfefe and Grade 1 Kentucky Oaks winner Serengeti Empress battled the length of the Saratoga Race Course stretch in a thrilling renewal of the Grade 1, $500,000 Longines Test, but it was the former who bested her foe in notching her first Grade 1 victory in the seven-furlong event for sophomore fillies.

The LNJ Foxwoods-owned Into Mischief bay filly, who drew post 3, broke sharply under Joel Rosario, but Serengeti Empress was under heavy urging by jockey Jose Ortiz coming out of the gate and went to the lead while recording an opening quarter-mile in 22.19 seconds and a half-mile in 44.28 seconds on the fast main track.

Rosario urged Covfefe into gear around the far turn and she responded by moving up to even terms with Serengeti Empress. The two fillies separated themselves from the rest of the field and were nip and tuck in the final furlong. Covfefe had a narrow advantage while Serengeti Empress continued to dig down to her inside, but Covfefe would not be denied and scored by a half-length in 1:21.26 to Serengeti Empress, who was 8 ¾ lengths better than three-time Grade 1-winner Bellafina, who finished third.

Covfefe entered her Saratoga debut off of a hard-fought third-place effort against elders in the Roxelana at Churchill Downs, where she was three-quarters of a length behind Mia Mischief. She recorded a 107 Beyer Speed Figure in her prior start in the Grade 3 Miss Preakness at Pimlico, which she won by 8 ½ lengths.

The win was a third stakes victory of the meet for both Rosario and trainer Brad Cox.

"She was there for me the whole time," Rosario said. "She galloped better and better going forward and that was a tremendous race. I know turning for home, I had the 1 [Serengeti Empress] on the inside and at one point she came back a little and was there all the time. It turned out to be a good race at the end."

Cox spoke volumes of the effort his filly put on display.

"Her last two works at Churchill were phenomenal. I knew when we turned for home, we were going to get as good a Covfefe as we could get at this point of the year," Cox said. "I knew when she turned for home, she wasn't going to give in today. If she was ever going to get seven-eighths it was going to be today. She responded well and Joel gave her an excellent trip. To get a Grade 1 with her is huge. It was a super effort.

"It was up to Joel where he wanted her to be," Cox continued. "They sent the filly [Serengeti Empress, No. 1] from the inside and it worked out well. We sat a good trip. I think if you were to ask our filly, she could probably be in front of that filly, but she's a smart filly and was able to sit off. We had to get by a Kentucky Oaks winner. That's a Grade 1 winning filly on the inside and now we have a Grade 1 winner. It was a big effort and I'm super proud of her. I'm very thankful for LNJ Foxwoods to give us an opportunity like this."

Tom Amoss, trainer of Serengeti Empress, was gallant in defeat and tipped his hat to the winner.

"This is one of those races similar to the [Grade 1] Acorn [June 8). We don't hang our heads at all," Amoss said. "Our horse ran such a fine race. It was the kind of race that the fans were hoping for and for myself personally - I wish it had gone the other way - what a great stretch duel. We got beat by a wonderful performance by our opponent Covfefe. Just as importantly, I look at the last sixteenth of a mile this race and how my filly kept on fighting and I could not be more proud of her. There will be other days for us, but don't take anything away from Serengeti Empress. She ran great."

Bred in Kentucky by Alexander-Groves Thoroughbreds, Covfefe is out of the Unbridled broodmare Antics, who is a half-sister to Grade 1 winner and champion producing sire Arch as well as Grade 1 winner Acoma. Covfefe was purchased for $250,000 from the Keeneland September Yearling Sale in 2017.