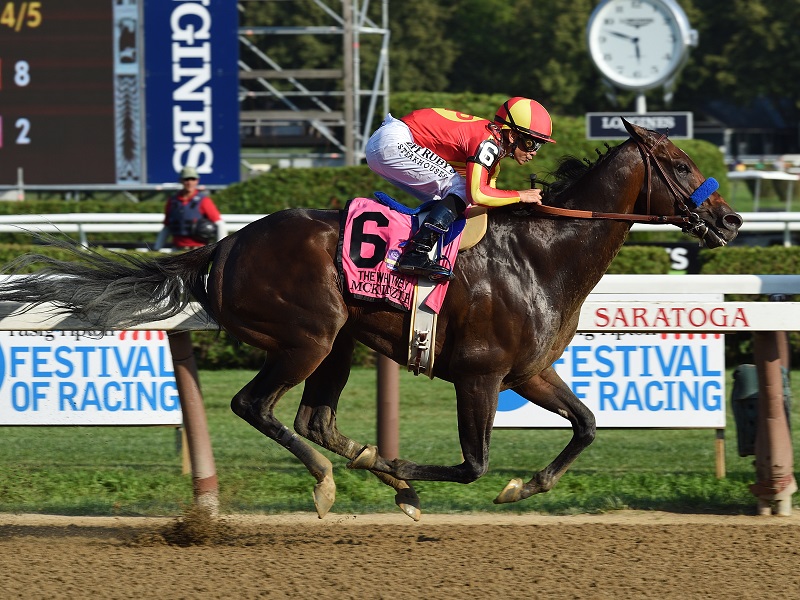 SARATOGA SPRINGS, N.Y. - What do you get the man who has almost everything? McKinzie provided an answer by earning Hall of Fame trainer Bob Baffert a new timepiece, and more importantly, his first career victory in the Grade 1, $1 million Whitney, outkicking Yoshida for a 1 ¾-length score in the 1 1/8-mile route on Saturday at Saratoga Race Course.

The 4-5 favorite, owned by Karl Watson, Michael Pegram and Paul Weitman, notched his fourth career Grade 1 victory in capturing the 92nd running of the Whitney, earning an automatic berth to the Grade 1, $6 million Breeders' Cup Classic on November 2 at Santa Anita Park.

Baffert, a two-time Triple Crown winner who has earned four Eclipse Awards for Outstanding Training as well as 15 victories in American Classic races and 15 Breeders' Cup victories, added "Whitney-winner" to his ledger with just his second starter and first since 2004.

"This win is very emotional for me," said Baffert, who along with fellow winning connections was gifted a new commemorative Longines watch in the winner's circle. "I was telling John [Hendrickson, husband of the late Marylou Whitney] this horse was named after a close friend of ours [Brad McKinzie] that passed away a few years ago. I got very emotional after he won. I was hoping that when I was thinking about running here, I'd never won this race and wanted to see her here so it's kind of sad. It's a great honor to win the Whitney. I've never won the Whitney, so this is a huge moment for me."

Under Hall of Fame jockey Mike Smith, McKinzie broke well and dueled Preservationist out front, leading the seven-horse field through an opening quarter-mile in 23.77 seconds on the fast main track, with Preservationist taking the lead with a half-mile in 47.48 under jockey Junior Alvarado.

Staying close into the far turn, McKinzie swung outside entering the stretch to take the lead. Yoshida, under urging from rider Joel Rosario, made a bid from the far outside in the final furlong, but Smith kept McKinzie under a drive, hitting the wire in 1:47.10.

"That was incredible. He ran big," said Smith, who won his second Whitney and first since Brunswick in 1993. "There were some good horses in there so he had to run, but he ran. That's the important thing. He had to work at it, but he got away from them and the best part of it was at the end of the race. That gives me confidence going a mile and a quarter down the road. The break was huge. Today, he felt better than he ever had. I knew he was going to jump well today."

McKinzie improved to 7-4-0 in 12 career starts, with his only off-the-board finish coming with a 12th-place effort in the Breeders' Cup Classic as a sophomore against older horses in November at Churchill Downs. Since then, the Street Sense colt has finished first or second in six starts, winning the Grade 1 Malibu in December at Santa Anita and the Grade 2 Alysheba in May at Churchill to put himself at the top of the Older Male division.

"I think he's getting better and better and as long as he's getting better that's the main thing," Baffert said. "I'm glad that he got the right trip and Mike [said] he's got him figured out now. He rode him with a lot of confidence. He can be on or off the lead. When they came to him, I got a little bit nervous. I started thinking maybe he doesn't want to go that far, but he's always shown us in his works that he's got more gears. Joe Talamo, who works him, couldn't believe that he got beat last time, but right now we've got him figured out."

Yoshida, trained by Hall of Famer Bill Mott, bested Vino Rosso by 4 ¾ lengths for second. The Japan-bred finished in the money for the first time in five starts and first since winning the Grade 1 Woodward last September at the Spa.

"He ran a good race. He came with a good run," Mott said. "He saved ground on the first half of the turn, he did tip out maybe a little bit early and came around a few horses, but the horse was running and he didn't have to stop his momentum and he kept him rolling."

Vino Rosso, the 2018 Grade 2 Wood Memorial winner, followed his victory in the Grade 1 Gold Cup last out on May 27 at Santa Anita by clearing away 1 ¼ lengths from Preservationist for third. Forewarned, Monogahela and Imperative completed the order of finish.

Thunder Snow, who was 3-1 on the morning-line, was scratched the morning of the Whitney after spiking a temperature. The back-to-back winner of the Group 1 Dubai World Cup at Meydan for trainer Saeed bin Suroor is the world's richest active racehorse with earnings of $16,511,476.

The Whitney was one of five stakes on Marylou Whitney Day, honoring the late philanthropist whose contributions to racing earned her the nicknames "Queen of Saratoga" and "Grand Dame of Saratoga" among other honors before she passed away on July 19 at age 93.

"This was so important for him to win. Not only for his namesake, but for the horse," Baffert said. "First thing I told the owners is - I got my Whitney - but it's sad Marylou wasn't here. She's always been so nice to us, but this is every emotional for us. I was just thinking about Brad McKinzie because he was so important to us and I'm just so happy this horse has lived up to him."

Live racing will resume Sunday with an 11-race card that includes four stakes, including the $100,000 John Morrissey, the Grade 3, $200,000 Fasig-Tipton Waya, the Grade 2, $200,000 Adirondack for 2-year-old fillies in Race 10 and the $1 million Saratoga Derby Invitational, the second leg of the Turf Triple Series for males, in Race 9.