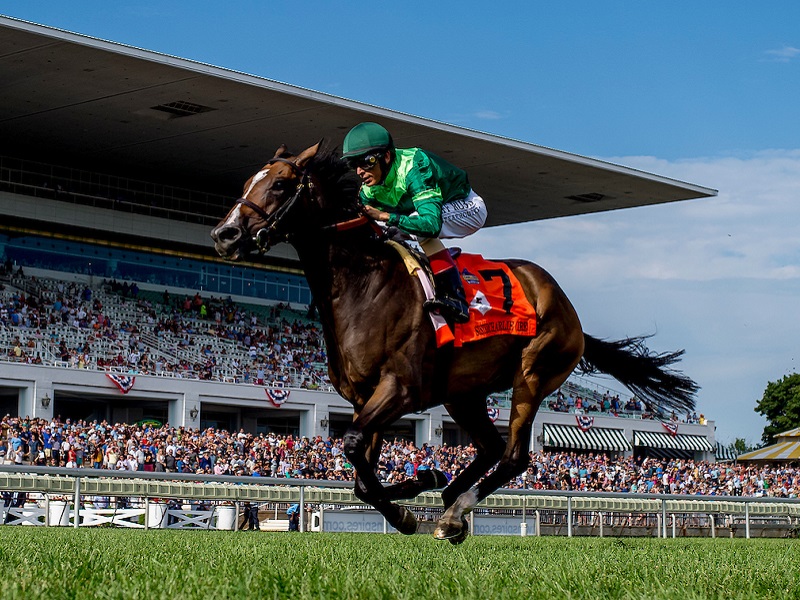 Peter M. Brant’s Sistercharlie (IRE) kicked off what would eventually prove to be a Chad Brown sweep of Saturday’s Grade I races at Arlington International Racecourse when becoming the first horse to win two editions of the Grade I $600,000 Beverly D. She captured last year’s Beverly D. by a half-length in her final race before a victorious run in the Grade I Breeders’ Cup Filly & Mare Turf, and with her tally in Saturday’s Breeders’ Cup Win and You’re In event, she earned an automatic berth in that same event this year.

The 5-year-old mare was making her second start of the year after a victory in the Grade I Diana at Belmont last month and settled second-last in the early going behind splits of 22.76, 46.23 and 1:09.66. Rated well by John Velazquez until the far turn, the daughter of Myboycharlie made a sweeping move into the lane and effortlessly accelerated past her pace-setting stablemate Thais (FR) and Lee Yuk Lun’s William Haggas-trained Awesometank (GB) and to post a three-length win as the race favorite in a final time and new track record of 1:52.43 for the 1 3/16-miles trip.

The win was the fifth consecutive and sixth overall Beverly D. score for Brown, who landed the previous four renewals with Sistercharlie (2018), Dacita (2017), Sea Calisi (2016) and Watsdachances (2015). He previously won with Stacelita (2011)

Awesometank (GB) held well for second under Florent Geroux while two lengths clear of Klaravich Stables’ Competitionofideas, who rallied from well behind to grab third for Javier Castellano and trainer Chad Brown.

“I wasn’t worried at all [about Thais],” Velazquez said. “I was a little worried about the fillies from Europe. We had one in front and one behind me, but I had all the confidence in the world in [Sistercharlie]. She always takes care of business.”

“She’s the horse of a lifetime,” Brown said.

“We had a great trip, I loved where we were,” Geroux said. “I looked back and I wondered if Sistercharlie might be too far back. I was riding my race, and we just got outrun – that’s the best filly in North America.”

Thais, Remember Daisy and Oh So Terrible completed the order of finish. Magic Wand (IRE) scratched in favor of a run in the Arlington Million, where she finished second.