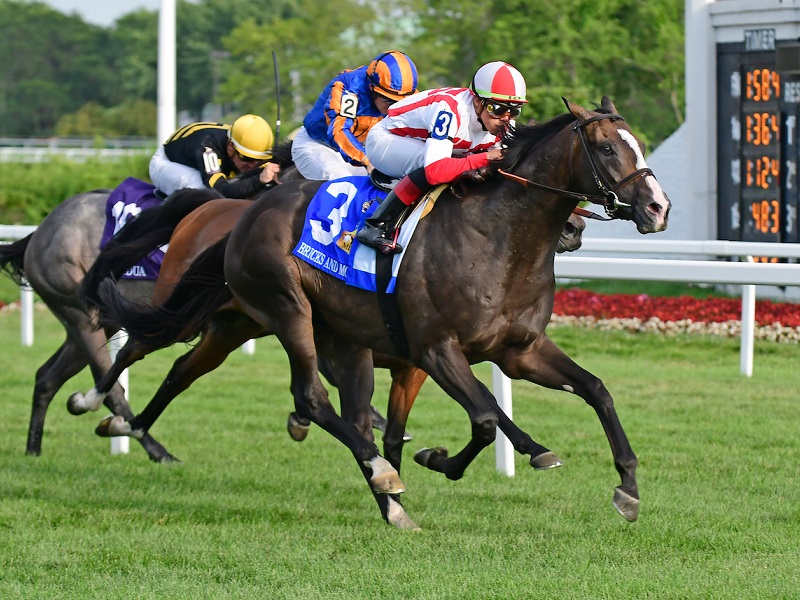 Bricks and Mortar came into the race riding a five-race win streak, three of which were Grade I victories. The 5-year-old son of Giant’s Causeway relaxed mid pack siting patiently while Bandua set early fractions of :24.45, and a :48.65 half-mile. Going into the turn, Bricks and Mortar was in desperate need of racing room. As the field straightened for home, he got that room and sprinted down Bandua and Hunting Horn(IRE). Bricks and Mortar ran away with a 3/4th length victory in a final time of 1:36.80.

“He’s just a great horse,” said Irad Ortiz Jr. after guiding Bricks and Mortar to victory. “That makes six in a row for me and him. The first time I got on him we won by a neck but I knew how much he had left and how special he was. The rest has been history. I never worry about anyone else in the race with this horse, I just concentrate on him and let him take me where he wants. When I ask for him he’s there for me every time.

“Chad has a lot of people behind him that are all very special, and this horse is really special too,” said the winning owners. “What’s next is up to Chad, but I think the Breeders Cup is obviously on the horizon. It’s been an amazing experience so far.”

Aiden O’Brien’s Magic Wand(IRE) finished a game second in the 37th running of the Arlington Million. Making her first start since a flat eleventh place finish in July, Magic Wand was passed late in the stretch but still held off third place finisher Bandua.

“She ran a very good race,” said rider Wayne Lordan. “She loves very hard ground, and her last start was on very soft ground, but she likes when she comes here and the ground is fast.”

Rounding out the top three was the Jack Sisterson trained Bandua, who set the pace early and held on valiantly for third.

“He likes to grind it out from the front end,” said jockey Adam Beschizza. “It was perfect. He jumped good and he stayed the distance. Look, in a race like that where you’re sort of up against it a little bit and stepping up in class, that’s the best thing you can do. Take it to them. You’re not going to catch a horse like [Bricks and Mortar].”