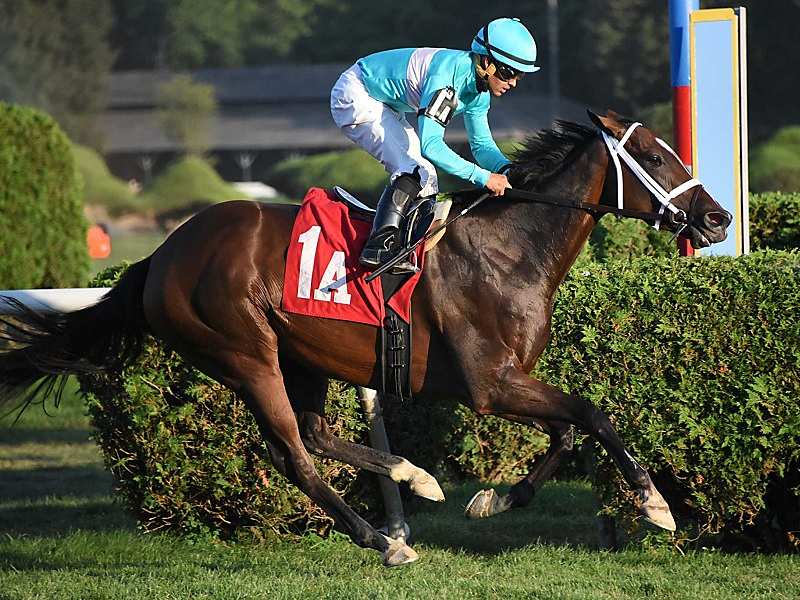 SARATOGA SPRINGS, N.Y. - Sheep Pond Partners and Michael Ryan's Sassy Little Lila will take on the boys as the lone filly in the field of seven entered for Saturday's 33rd running of the Grade 1, $500,000 Fourstardave Handicap at a mile on the inner turf at Saratoga Race Course.

Racing exclusively against fillies, the 4-year-old Artie Schiller filly hasn't finished worse than second in seven starts since her debut in June 2016, including a pair of Grade 1 placings in the American Oaks at Santa Anita Park in December and the Just a Game on June 10 at Belmont Park last time out.

Sassy Little Lila broke her maiden at the Spa as a 3-year-old, drawing off to a five-length victory on September 5, completing the 1 1/8-mile turf route in 1:45.90, less than three-tenths of a second off the course record.

"She's still a lightly raced filly," said trainer Brad Cox. "She's a 4-year-old that hasn't run a lot, so she's still learning and hopefully her best races are in front of her. She's ultra-consistent. She has a lot of talent and ability.

"We knew last summer when she was breezing here, she really stepped up and showed us that she could be a graded stakes horse even right before she broke her maiden," he added. "Her works were spectacular. She won the last race on the last day of the meet last year and almost broke the track record, so we knew she had a big upside."

Cox had entered the speedy filly into last weekend's Fasig-Tipton De La Rose, but opted instead to wait for the Fourstardave. Sassy Little Lila has been installed as the field's low weight at 112 pounds.

"Obviously, there's a couple angles we're hoping work out: We get a weight break as a filly facing the boys, she likes a mile, and she likes this course up here," Cox said. "It's an ambitious spot but she's doing well, so we think she's up for the challenge."

Hall of Fame trainer Bill Mott will aim for his fifth overall win - and third in four years - in the Fourstardave with Donegal Racing's Grade 3 Poker winner Ballagh Rocks.

Ballagh Rocks, a 4-year-old colt by Stormy Atlantic, put together a three-race win streak through the fall and winter and came back from a nearly three-month layoff to finish a close fourth in the Grade 1 Makers' 46 Mile at Keeneland. He finished a troubled seventh in the Grade 1 Turf Classic on the Kentucky Derby undercard at Churchill Downs before rebounding to post a neck victory over the favorite Projected.

"He's come along nicely. He's won four of his last six. He's done well and it looks like he's good at a mile," said Mott, who won last year's race with eventual Breeders' Cup Mile winner Tourist, as well as Seek Again (2014), Silver Tree (2007), and Hap (2000). "There's not much pace in the race, so I don't know where that puts us. There could only be one horse in there with any pace."

Ballagh Rocks will be ridden by Jose Lezcano from the rail.

WinStar Farm's Grade 1 Maker's 46 Mile winner American Patriot is set to make his stateside return following an unsuccessful jaunt to England for the Group 1 Queen Anne on June 20 at Royal Ascot, where he finished 11th.

"I think he was a little confused, going the wrong way, uphill and the trip and all that, it just didn't work out for him. It was obviously a different setting for him, going a straight mile," said trainer Todd Pletcher.

Prior to the Queen Anne, the War Front colt posted back-to-back wins to start his 4-year-old season, capped by a late-closing neck victory in the Maker's 46 on April 14.

"He came back from Royal Ascot in good form and he's been pointing for this since then," Pletcher said. "He's been training well. He seems happy, and he's getting back to what he's best at, which is a two-turn mile. He gives us the impression he's training as well as he ever has. It's a tough race for sure, but he acts like he's in good form. I think his Maker's 46 indicates when he's on his A-game, he can compete with the best of the American milers."

Listed as the co-highweight at 121 pounds, American Patriot will break from post 2 with Hall of Famer John Velazquez in the irons.

Patricia Generazio's homebred Disco Partner, who owns the world record time for six furlongs on the turf for his Grade 3 Jaipur victory in June, will try for his second straight win at a mile for trainer Christophe Clement.

"I thought he won well at Belmont but it's a Grade 1 so we'll try it," said Clement. "It looks very ambitious and we can always go back shorter next time, but he's won at a mile so we'll see what happens."

Juddmonte Farm's Time Test will try to improve on his runner-up effort in the Grade 1 Manhattan on June 10 at Belmont, cutting back from 1 ¼ miles on the grass for trainer Chad Brown. Time Test will break from post 3 with Javier Castellano aboard.

Also making his first start since the Manhattan is Live Oak Plantation's multiple graded stakes winner World Approval, looking to rebound from his fifth-place finish. Prior to that, the 5-year-old Northern Afleet gelding earned a 2 ¼-length victory in the Grade 2 Dixie at Pimlico Race Course, tying his career-best Beyer Speed Figure of 106. World Approval will be ridden by Manny Franco from the outside post.

Weekend Hideway, drawing post 4, is entered for the main track only.