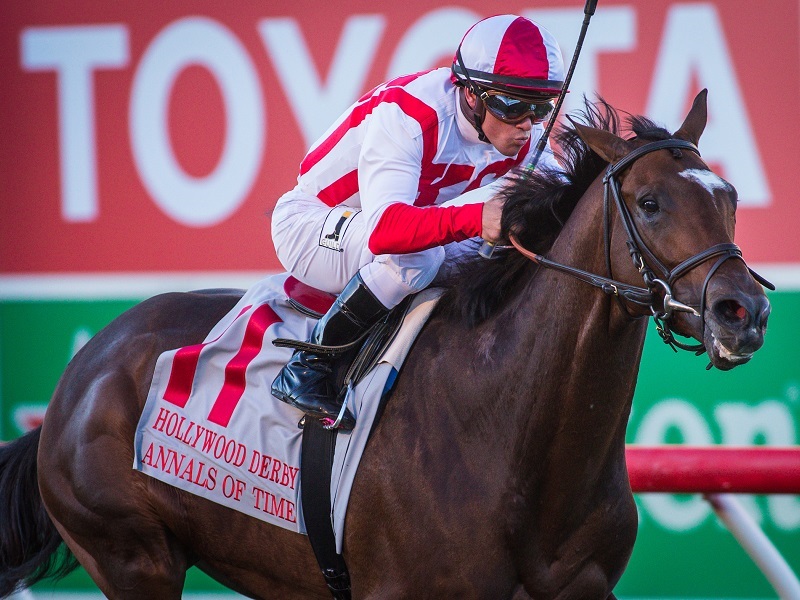 SARATOGA SPRINGS, N.Y. - Entering off an impressive optional claiming allowance win on July 24, Klaravich Stables' and William Lawrence's Annals of Time will make his first graded-stakes start since winning the Grade 1 Hollywood Derby in 2016 as a 3-year-old in the Grade 1, $850,000 Sword Dancer going 1 ½ miles on the inner turf course on Saturday at Saratoga Race Course.

The Sword Dancer is one of seven stakes races on Saturday's card, including six Grade 1's highlighted by the 150th running of the Grade 1, $1.25 million Runhappy Travers. National television coverage of Travers Day will be featured on FOX from 5-6 p.m ET.

Undercard coverage will also be televised on a special Travers Day edition of Saratoga Live, airing nationally on FS2 from 11:30-5 p.m. ET. Regional coverage of Saturday's Saratoga Live can be found on MSG+, FOX Sports Prime Ticket and Altitude.

A 6-year-old son of Temple City in the care of meet-leading conditioner Chad Brown, Annals of Time graduated in his debut at Aqueduct Racetrack in 2015 and finished third in the Grade 3 Hill Prince at Belmont as a 3-year-old before winning the Hollywood Derby at Del Mar Race Track.

Sidelined for nine months following that win due to a soft tissue injury, he has only raced three times since, winning a second-level allowance race as a 4-year-old at Belmont Park followed by a runner-up third level allowance finish before subsequently winning last out by 4 ½ lengths at the Spa.

Although concerned with the mile and a half distance, Brown said he is looking forward to bringing Annals of Time back against top level competition.

"A mile and a half will be a test for him," said Brown. "He's never run in a three-turn race before. I'd prefer there to be some pace in the race, but he has a really good turn of foot and he's going need to."

Annals of Time will leave from post 7 with Hall of Famer Javier Castellano aboard.

Also entering for Brown is Proven Reserves for Klaravich Stables and Chilean-bred Ya Primo for Madaket Stables and Don Alberto Stables.

A 4-year-old son of Flatter, Proven Reserves will try turf for the first time making his third start of the year following a pair of fourth-place finishes in second-level allowance company events, on June 19 at Belmont and on July 19 at Saratoga.

Ya Primo, a Mastercraftsman 4-year-old colt and multiple graded stakes winner in South America where he made his firs nine career starts, finished a game second to fellow entrant Channel Cat beaten by a half-length in the Grade 2 Bowling Green on July 27 in his North American debut.

"He ran super in that race and just came up a little bit short at the end," said Brown. "He's been training particularly well since and we're looking to running in the Sword Dancer. It was always our plan."

Drawing the rail, Proven Reserves will leave with Manny Franco aboard. Ya Primo will depart from post 6 with meet-leading rider Jose Ortiz in the irons.

"He's doing well," said Pletcher. "He's training good. I think he's consistent with a lot of English Channels. He had some success at 2 and 3, but he really improved at 4 and I think he will continue to improve. I think for the most part [offspring of English Channel] tend to peak in their 5 year old year in a lot of cases. And this is a horse we've always liked. I kind of called him as a 2-year-old our sleeper horse that would hopefully develop into a top-class older horse and he's right on the verge of that."

Channel Cat will leave from post 4 with Luis Saez up.

Pillar Mountain, a 4-year-old Irish-bred son of Kodiac, made one career start in Ireland where he broke his maiden and enters the Sword Dancer following back-back allowance wins on June 6 at Belmont and July 19 at Saratoga each going 1 3/8 miles.

Looking to rebound off a sixth-place finish in the Grade 2 Bowling Green in which he made his first start of the year is Sadler's Joy for Woodslane Farm and conditioner Tom Albertrani.

The 6-year-old Kitten's Joy multiple graded stakes winner has two wins from seven starts at Saratoga and is in search of his first victory since winning the Grade 2 Mac Diarmada in 2018 at Gulfstream Park.