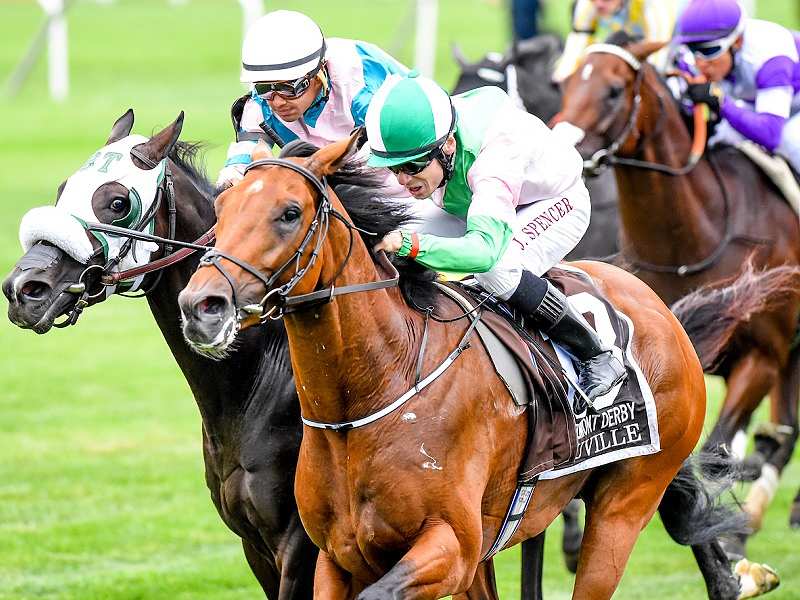 A field of 13 passed the entry box in advance of anticipated starts in Saturday's 35th running of the Grade I $1 million Arlington Million at Arlington International Racecourse. The Million, run at 10 furlongs on the Arlington turf course, will be contested as a “Win and You're In” race for the Grade I $4 million Longines Breeders' Cup Turf to be held at Del Mar on Nov. 4.

Leading the competitive field is Mrs. Fitri Hay, Mrs. John Magnier, Michael B. Tabor and Derrick Smith's Deauville (IRE), who missed glory in last year's Million by just a half-length when testing his elders as a 3-year-old. Landing multiple Group I placings in the year since, the now 4-year-old son of Galileo (IRE) will look to earn his first Grade I win since taking down last year's Belmont Derby Invitational for trainer Aidan O' Brien. Ryan Moore, aboard for all but one of Deauville's starts this year, will return to the saddle from post five.

The American contingent is headed by Gunpowder Farms' Divisidero and James Covello, Sheep Pond Partners and Head of Plains Partners' Beach Patrol. The former, a 5-year-old son of Kitten's Joy trained by William Bradley, has captured the Grade I Woodford Reserve Turf Classic in consecutive years at Churchill Downs and will look to return to top form after a sixth-place finish in this year's Grade I Manhattan Stakes at Belmont Park. Julien Leparoux will return to the saddle from post 11. The latter, a winner of last year's Grade I Secretariat Stakes for trainer Chad Brown, has gone winless since his local triumph last August but has remained consistent, landing three Grade I-placings since. Most recently third as the favorite in the Grade I United Nations at Monmouth, the 4-year-old son of Lemon Drop Kid will be piloted by Joel Rosario from post 10.

Godolphin Racing will send out Group III winner Scottish (IRE) off a fifth-place finish in the Group I Prince of Wales's Stakes at Royal Ascot behind Highland Reel. The 5-year-old son of Teofilo (IRE) is a four-time winner but has yet to find the wire first against Grade I company. Trainer Charles Appleby may have the gelding ready for better in just his second start of 2017 when he breaks from post nine under William Buick.

Finishing just a quarter-length behind Scottish at Royal Ascot was Al Shaqab Racing's Mekhtaal (GB). A Group I winner in the Prix d'Ispahan at Chantilly in May, the Jean-Claude Rouget trainee will be in search of his third career win at the Million distance after breaking his maiden and capturing the Group II Prix Hocquart early in his career. Frankie Dettori will ride the son of Sea The Stars (IRE) for the first time from the outside post 13.

Stone Farm and Madaket Stables' Ascend will be in search of his second Grade I win this season when contesting the Million. A 27-1 upset winner in the Grade I Manhattan at Belmont in June, the 5-year-old son of Candy Ride most recently finished fourth in the Grade II Bowling Green at Saratoga. Trained by Graham Motion, Ascend will break from post 12 under Jose Ortiz.

2015 Arlington Million champion The Pizza Man will return for his third try in the Million after finishing a close sixth, beaten just 1½ lengths, in last year's running. The 8-year-old son of English Channel, who races for Midwest Thoroughbreds, has posted ten of his 17 lifetime wins on the Arlington turf course and exits a second-place finish in the Grade III Stars and Stripes in his most recent start. The Illinois-bred earner of more than $2.1 million will be partnered with Irad Ortiz, Jr. for the first time from post seven.