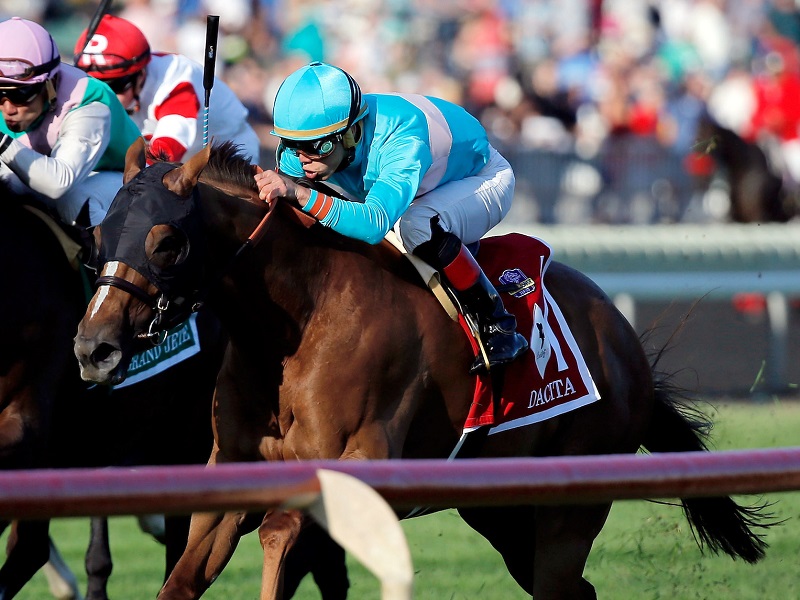 The 28th running of the Grade I $600,000 Beverly D. over 1 3/16-miles on the turf at Arlington International Racecourse sets up as a battle between Dom Felipe’s brilliant Dona Bruja (ARG) and nine other talented fillies and mares in the field. The Beverly D. is a “Win and You’re In” race for the Grade I Breeders’ Cup Filly & Mare Turf to be run at Del Mar on Nov. 4.

Dona Bruja, a 5-year-old mare trained by Ignacio Correas, IV, is undefeated in her two North American starts, including the Grade III Modesty over this course on July 8 when the Argentine-bred showed a powerful turn of foot to overtake the leaders late in a seemingly effortless move. She has never finished worse than second in her 12 lifetime starts, holding 10 wins with six of those victories coming in graded stakes. With Declan Cannon aboard from post four, Dona Bruja will try to equal her final performance last year at San Isidro in Argentina where the daughter of Storm Embrujado (ARG) won the Group I Copa de Plata Roberto Vasquez Masilla Internacional at 1¼ miles on the grass by 1½ lengths.

Leading the charge from the stable of Chad Brown will be Sheep Pond Partners and Bradley Thoroughbreds’ Grade I winner Dacita (CHI) who will break from the rail under Irad Ortiz, Jr. The 6-year-old millionaire mare by Scat Daddy finished second in photos twice after winning the Grade I Diana last season but has the class of the field as she makes her third start of the season. Also from the Brown stable, who is tied with Christophe Clemente for the record number of Beverly D. wins (3), will be Juddmonte Farms’ winner of the Grade III Eatontown Stakes Grand Jete (GB). A winner in all three of her starts this season, the 4-year-old Dansili (GB) filly will start from post five with Joel Rosario aboard. Brown also will saddle Lael Stables’ multiple Grade II-winner Rainha Da Bateria for his Beverly D. defense. The 5-year-old daughter of Broken Vow will be ridden by Jose Ortiz from post seven.

Lael Stables will also have 4-year-old filly Hawksmoor (IRE) from the barn of Arnaud Delacour in the field. The Grade I-placed daughter of Azamour (IRE) was third as a juvenile in the Group I Dubai Fillies Mile behind Minding, and was a winner in the Group II German 1000 Guineas last June. Third in her first North American start at Keeneland last fall, Hawksmoor has won both Grade III and Grade II events this season and will be trying to secure an elusive Grade I victory under Julien Leparoux as they start from post nine.

From Europe comes Rain Goddess (IRE) from the barn of Aidan O’Brien, runner-up in her most recent start to talented filly Enable in the Group I Darley Irish Oaks. Owned by Michael B. Tabor, Derrick Smith and Mrs. John Magnier, the 3-year-old filly by Galileo finished second when facing elders two starts back. She will break from the outside post in this field of ten under Ryan Moore. Also making the international trek is Gestuet Faehrhof’s Sarandia (GER). The 4-year-old daughter of Dansili, who sired 2013 Beverly D. winner Dank, was second in the German Oaks last year. The Peter Schiergen trainee drew post eight and will have Andrasch Starke in the irons.

Mike Stidham will send out Empyrean Stables’ Zipessa from gate six. The 5-year-old daughter of City Zip was third last year in this race and has been showing improvement with her recent form. Frankie Dettori will pick up the mount. Darrell and Sadie Brommer’s Modesty runner-up Prado’s Sweet Ride has drawn in gate two with Carlos Marquez, Jr., aboard. Chris Block trains the 5-year-old daughter of Fort Prado who was a winner in the New Orleans Overnight Stakes earlier this season. Kenneth and Sarah Ramsey will run Mike Maker trainee Kitten’s Roar from post three with Florent Geroux in the irons. The 5-year-old mare by Kitten’s Joy finished third 2½ lengths behind Hawksmoor in her most recent start, the Grade II New York Stakes.

The Beverly D. will be the first leg of a $100,000 guaranteed Pick-3 that includes the Arlington Million and the Pucker Up Stakes.