Mitole Gets Back to Winning Ways in G1 Forego Stakes 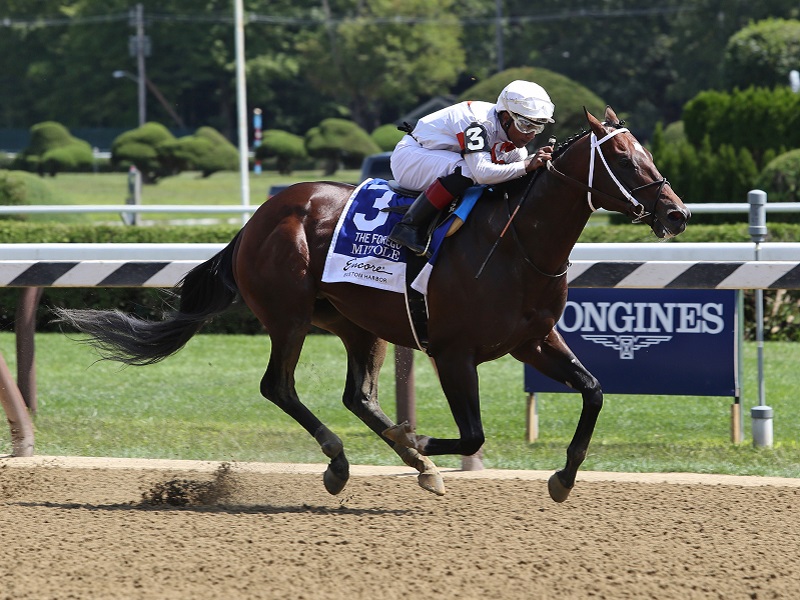 SARATOGA SPRINGS, N.Y. - William and Corrine Heiligbrodt's Mitole dueled up front with Grade 1-winner Promises Fulfilled and successfully shook away from his rival to net his third career Grade 1 win in the 40th running of the $600,000 Forego presented by Encore Boston Harbor at Saratoga Race Course on Saturday.

The seven-furlong sprint for older horses on the main track pays homage to the three-time Horse of the Year (1974-76) and four-time Champion Older Horse (1974-77). Before building a champion-caliber resume, he finished fourth behind fellow Hall of Famer and Secretariat in the 1973 Kentucky Derby. The sensational Forego was a 14-time Grade 1 winner.

Guided by jockey Ricardo Santana, Jr., who piloted last year's Forego victor Whitmore, Mitole broke sharply from post 3 and went straight to the front in tandem with Promises Fulfilled to his inside and the two multiple Grade 1 winners laid down a moderate opening quarter-mile of 23.05 seconds on the main track rated fast.

Around the turn, the two continued to duel through a half-mile in 45.58 but Promises Fulfilled began to give way with Santana, Jr. asking for more from Mitole.

At the the of the stretch, Mitole extended his lead to three lengths with Killybegs Captain looming to his outside. In the final furlong, Mitole was the clear leader and sailed home under the wire, maintaining his three-length advantage in a stakes-record time of 1:20.80. Firenze Fire made a late bid to catch second, three-quarters of a length ahead of Killybegs Captain who rounded out the trifecta.

The win was the second stakes victory of the meet for Santana, who previously guided Got Stormy to a track-record setting performance against males in the Grade 1 Fourstardave two weeks ago.

"Today he broke sharp and put himself in a position where he wanted to be," Santana Jr. said. "He's a really nice horse to ride, and he does everything right. We [went] slow in the first couple of quarters. My horse was comfortable in the position he was [in]. He put himself in a great spot."

Trained by Hall of Famer Steve Asmussen, Mitole made amends in the Forego following a disappointing third in the Grade 1 Alfred G. Vanderbilt earlier in the meet, where he was beaten 7 ½ lengths as the heavy favorite. The Forego was a third Grade 1 win for the 4-year-old Eskendereya chestnut, who earlier in the year captured the Churchill Downs and Runhappy Metropolitan Handicap.

"I think the circumstances for the Vanderbilt just didn't suit him; coming off the huge run in the Met Mile and cutting back to three-quarters," Asmussen said. "But he came out of the race in good shape, trained beautifully for this, and the results speak for themselves.

"Just like going into the Churchill Downs and the Met Mile, Ricardo [Santana, Jr.] knows the horse, lets him be himself, and the best version of Mitole usually takes care of itself," Asmussen added.

Asmussen said the Breeders' Cup Sprint at Santa Anita on November 2 is the long term goal for Mitole.

"I think that this was very significant coming off the loss in the Vanderbilt," Asmussen said. "We'll speak with the Heiligbrodts and see how he comes out of the race and see how he trains. Obviously, we'll try to align ourselves for the Breeders' Cup."

Bred in Kentucky by Edward A. Cox, Jr., Mitole was a $140,000 acquisition from the Ocala Breeders Sales Company's 2-Year-Olds in Training Sale in 2017. He is out of the Indian Charlie broodmare Indian Miss.