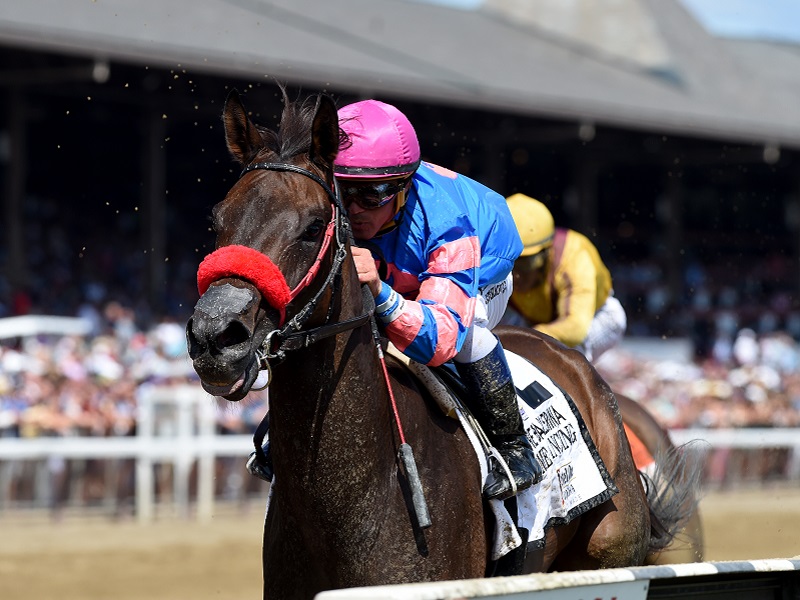 SARATOGA SPRINGS, N.Y. - Taking charge in the stretch, Come Dancing came prancing across the finish line to win the $500,000 Ketel One Ballerina on Saturday at Saratoga Race Course.

The 41st running of the Ketel One Ballerina, a "Win and You're In" qualifier to the Breeders' Cup Filly and Mare Sprint in November at Santa Anita Park, was one of seven stakes and six Grade 1s on a packed card highlighted by the 150th Grade 1, $1.25 million Runhappy Travers.

The seven-furlong Ballerina for fillies and mares 3-years-old and upward was whittled to five starters after the scratches of Pacific Gale and Mint to Stardom.

Sent off as the 3-5 favorite, Blue Devil Racing Stables' Come Dancing sat off the early pace set by Separationofpowers and Mia Mischief. The early fractions were 23.31 seconds for the quarter and 45.86 for the half-mile on the main track rated fast. Come Dancing, under Hall of Famer Javier Castellano, made her move around the turn and took command, winning by 3 ½ lengths in 1:21.48.

"When I saw her just sit out there in third, I said, 'She's so comfortable.' When she gets into that comfortable rhythm, it means she has a lot left coming back,'' said Martin. "She trained so brilliantly the whole time here. Sitting around the turn, I felt pretty comfortable."

So did Castellano, even with a start that wasn't so great.

"She didn't break sharp out of the gate. I took my time to move up and control the race,'' said Castellano. "She's a wonderful filly and she's so kind. You can do whatever you want with her. In the stretch, she proved she was much the best the way she did it."

Come Dancing ran second in her last race, finishing 3 ½ lengths behind Midnight Bisou in the Grade 1 Ogden Phipps at Belmont Park on June 8. Come Dancing opened her 5-year-old year with back-to-back wins, first with a 7 ¾-length romp in the Grade 3 Distaff Handicap. The daughter of Malibu Moon followed with a 6 ¾-length victory in the Grade 2 Ruffian at Belmont on May 5.

The win marked the first Grade 1 for Martin, now 50, since he became the youngest trainer to win at the top level in New York, when Buy the Firm captured the 1991 Top Flight.

"I was thinking we won a Grade 1 at Saratoga and we kept the Martin family and the Blue Devil family in a good frame of mind going into the Breeders' Cup,'' said Martin. "I think she's shown that, when given time between races, that she fires her best shot."

Come Dancing, with her seventh win in 12 career starts, returned $3.50, $2.80 and $2.30. Dawn the Destroyer was second and returned $6.10 and $3.70, with Special Relativity yielding $4.20 to show. Separationofpowers was fourth and Mia Mischief fifth. The five-horse field matched the smallest for the Ballerina since 2009.

"We're thrilled to be second. It's a Grade 1 and she's so well bred and a beautiful filly, so Johnny did a great job trying to win and got second,'' said Kiaran McLaughlin, who trains Dawn the Destroyer. "She put in a big run, but a very nice filly won it. Congratulations to Carlos Martin and his team."