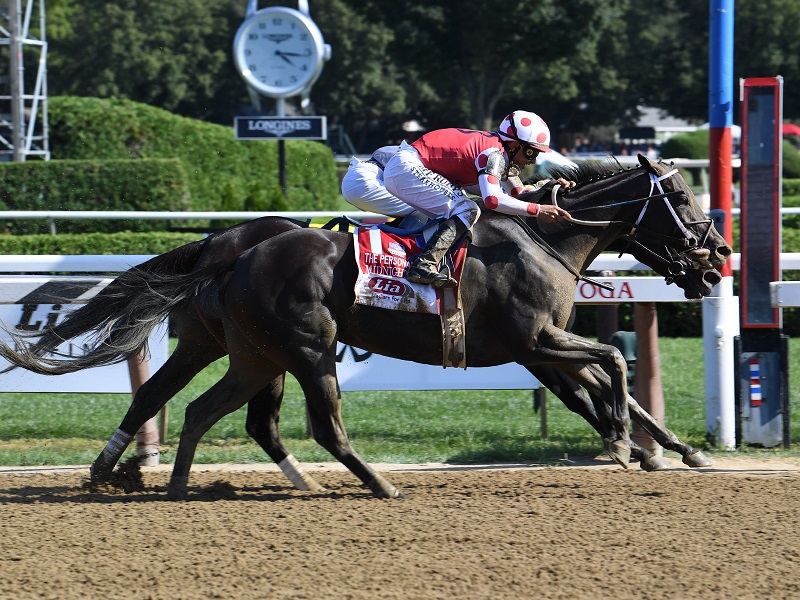 The 70th running of the 1 1/8-mile Personal Ensign for fillies and mares 3 and older on the main track was the fifth of seven graded-stakes, six of them Grade 1, worth $4.8 million in purses on a blockbuster 13-race program highlighted by the 150th renewal of the $1.25 million Runhappy Travers.

Bloom Racing Stable, Madaket Stables and Allen Racing's Midnight Bisou extended her win streak to six races since opening her 4-year-old campaign in January, completing the distance in 1:47.92 over a fast main track. Elate, the 4-5 favorite in an accomplished field of six, was 8 ¾ lengths ahead of She's a Julie - Midnight Bisou's Grade 1-winning stablemate also trained by Hall of Famer Steve Asmussen - in third.

It was the 11th career win and fifth in Grade 1 company from 17 lifetime starts for Midnight Bisou, earning the daughter of 2007 champion sprinter Midnight Lute an automatic berth to the Grade 1, $2 million Breeders' Cup Distaff November 2 at Santa Anita.

Coach Rocks, second by a length behind Midnight Bisou in the Grade 3 Molly Pitcher July 20 in the last start for both fillies, was quickest from the gate under Luis Saez and took the field through a quarter-mile in 23.46 seconds, a half in 47.88 and six furlongs in 1:11.58. She's a Julie pressed the pace in second with Elate in the clear three wide and Midnight Bisou biding her time at the rear.

Elate and regular rider Jose Ortiz launched their bid midway on the far turn and assumed the lead as Coach Rocks weakened. Hall of Famer Mike Smith tipped Midnight Bisou to the far outside and followed Elate's move, setting up the highly anticipated stretch duel. As their rivals began to fade into the background, Midnight Bisou came with a steady run and set her sights on a determined Elate, not edging past until the final moments.

"The mare ran a tremendous race," Smith said. "It was a fight to get by Elate, who is a champion in her own right. With the extra four pounds there it took me a bit to get going, but once I got her going I was really happy that she handled the mile-and-an-eighth. I thought I got there at the wire, but there have been times before when I thought I did and didn't. You don't know the bob exactly, but I felt like I got it anyway. I'm happy to know that I did."

Winner of the Grade 1 Alabama in 2017, Claiborne Farm and Adele Dilschneider's homebred Elate suffered her third career tough beat at Saratoga. She was a neck behind Abel Tasman's stakes-record 1:47.19 performance in last year's Personal Ensign, and lost by a head in the Grade 1 Coaching Club American Oaks prior to her Alabama triumph.

Bred in Kentucky by Woodford Thoroughbreds and purchased for $80,000 as a 2-year-old in training in April 2017, Midnight Bisou earned $375,000 for the victory, pushing her lifetime bankroll to $3,255,000. The Personal Ensign marked her first win at Saratoga after finishing second in the Coaching Club American Oaks and third in the Alabama last summer, and her first in four tries at 1 1/8 miles.

"The filly didn't run her best races here last summer and she came into this one in great form. And for her to win here at Saratoga against Elate in the Personal Ensign, at a mile-and-an-eighth ... check marks," Asmussen said. "I have a ton of respect for the effort she gave today. We'll evaluate how she's doing. I do think she is the leader of the division."

Run as the Firenze from 1948-85 and the John A. Morris from 1986-97, the Personal Ensign was renamed in honor of the undefeated champion filly owned and bred by Ogden Phipps. Her dramatic victory in the 1988 Breeders' Cup Distaff capped a 13-0 career, making her the first major horse in more than 80 years to accomplish the feat. Personal Ensign was inducted into the National Museum of Racing's Hall of Fame in 1993, followed 11 years later by her trainer, Shug McGaughey.