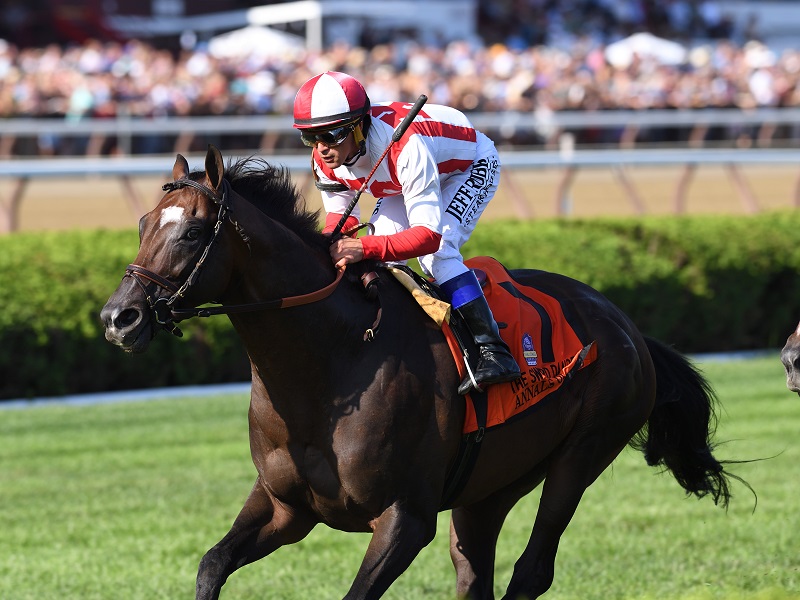 SARATOGA SPRINGS, N.Y. - Annals of Time came from far off the pace to capture the 45th running of the Grade 1, $850,000 Sword Dancer and complete his comeback from an injury that sidelined him for almost two years as he prevailed by a neck at Saratoga Race Course on Saturday.

The victory, which was the first top level score for the 6-year-old horse owned by Klaravich Stables and William Lawrence since he won the 2016 Grade 1 Hollywood Derby at Del Mar, also guarantees him an all-expenses paid berth in the starting gate for the $2 million Breeders' Cup Turf in November at Santa Anita Park as part of the "Win and You're In" Challenge Series.

Annals of Time, who had never before traveled as far as the 1 ½ miles distance of the three-turn test over the inner turf course, was game in victory, holding off by a neck the hard-charging Sadler's Joy, who was attempting a comeback of his own after winning the 2017 edition of the Sword Dancer and finishing 6th last year in this spot. Channel Cat was third, another two lengths behind.

"When he tipped out, I thought we had a good chance because he has a really good, strong closing kick. But it was a little tight near the finish. I'm glad he got up in time." said defending three-time Eclipse Award-winning trainer Chad Brown, who earlier in the day won the Grade 2, $400,000 Woodford Reserve Ballston Spa with Significant Form on the 150th Grade 1, $1.25 million Runhappy Travers card offering six Grade 1 races and one Grade 2 affair.

"It's been a real team effort. A guy named Nick de Meric down in Ocala picked him out as a baby, and every time he has gone to the sidelines, he's gone to rehab with him and his team. He sent him back to us, now as a 6-year-old, in fine shape. We finally have had an uninterrupted training schedule and campaign with him. He's back to his old form when he won the [Grade 1] Hollywood Derby when he was a 3-year-old. He's probably better now, so I'm just so grateful to have him back healthy," Brown continued.

Brown also saddled Ya Primo, was raced up on the pace and led the field into the home stretch, and Proven Reserves, who figured to race on the lead but was never a factor in the outcome. Ya Primo wound up last in the nine-horse field and Proven Reserves finished seventh.

Hall of Famer Javier Castellano, who also won the Grade 1, $400,000 Ketel One Ballerina on Come Dancing on the card, gave Annals of Time a perfect ride in the long-distance race.

"You can see the pace was very slow, but he still responded and passed all the horses. I took my time. It's a mile-and-a-half and it's the first time he's gone a mile-and-a-half. You don't want to rush it to be close to the pace. I rode with a lot of patience and it paid off today," Castellano continued.

Jose Lezcano, the jockey aboard runner-up Sadler's Joy, was philosophical in defeat, saying, "He broke good in a spot where I wanted to be. The last eighth, he gave me a good race. He ran hard. He gave me his race. We just came up short."

With the victory, Brown tied Hall of Famer Bill Mott for the most training wins in race history with three as he also took the 2016 edition with Flintshire and the 2013 running with Big Blue Kitten. Castellano has also won the Sword Dancer three times, scoring with Flintshire and Telling in 2009.