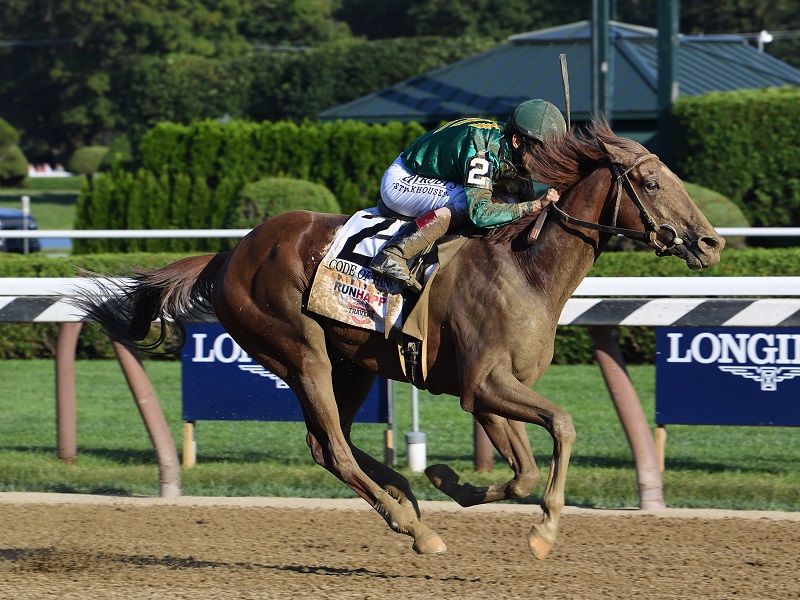 SARATOGA SPRINGS, N.Y. - Trainer Shug McGaughey won his first Travers in 21 years and joined a select group of Hall of Fame conditioners with his fourth "Mid-Summer Derby" triumph when Code of Honor made a strong move to the outside around the final turn and picked off six rivals en route to a three-length victory in the 150th renewal of the Grade 1, $1.25 million Runhappy Travers on Saturday at Saratoga Race Course.

The sesquicentennial iteration of the Travers, highlighting a packed seven-stakes card that featured six Grade 1s, saw McGaughey saddle his first Travers winner since Coronado's Quest in 1998 and fourth overall, joining Elliott Burch (four) and Winbert F. "Bert" Mulholland (five) as the only trainers with four or more Travers wins.

Extending the Hall of Fame connection was jockey John Velazquez, who kept W.S. Farish's Code of Honor settled on the inside in ninth position as 2-1 favorite Tacitus led the 12-horse field through the opening quarter-mile in 23.11 seconds before Mucho Gusto took command with the half in 47.26 and three-quarters in 1:11.21 on the fast main track.

Out of the far turn, Velazquez urged Code of Honor on, and the Noble Mission colt responded by thundering up from the outside, outkicking Mucho Gusto and Tacitus inside the final furlong and surging to the wire to complete 1 ¼ miles in 2:01.05.

Code of Honor, off at 4-1, was coming off a win by a head in the Grade 3 Dwyer on July 6 at Belmont Park, which followed his impressive Grade 1 Kentucky Derby in which he was placed second following the disqualification of Maximum Security. The Kentucky homebred returned $10.80 on a $2 win wager and improved his career earnings to $1,885,820.

"It doesn't get old, but it can't take that long again," said McGaughey, who won his first Travers 30 years ago with Easy Goer and also won in 1990 with Rhythm. "He's been a bit of a Jekyll and Hyde horse. Today, he put it all together. He trained really well. The Dwyer was a really good race, so we were hoping we were going to see what we saw."

In a wide-open 3-year-old division that saw three different winners of the Classics, and now with Code of Honor taking the Travers, McGaughey said Code of Honor continues to make a strong case to be considered the top of the division.

"The way he won today, you have to put him up there with them. We'll see what happens," McGaughey said.

Code of Honor improved to 4-2-1 in eight starts.

"I never had any doubts about distance as a problem, just him putting his mind to running," said Velazquez, who notched his second Travers win and first since Flower Alley in 2005. "Today, I made sure, when I got him out to the clear, he responded right away, so I was very happy for him. Obviously, we've been looking for this kind of performance for a long time. He's a late foal, not really knowing what to do [even though he's] run some really big races. He's never really put it together until today."

Juddmonte Farms' Tacitus, placed third in the Kentucky Derby, logged a third consecutive runner-up effort. By finishing a half-length clear of Mucho Gusto, he added to his hard-running second in the Grade 1 Belmont Stakes on June 8 and the Grade 2 Jim Dandy, both presented by NYRA Bets.

Tacitus won the Grade 2 Wood Memorial presented by NYRA Bets in April at Aqueduct Racetrack and has finished first or second in six of his eight starts for Hall of Fame trainer Bill Mott.

"We made the choice beforehand to go ahead and try and get him in the race, let him break and if they want to try to outrun you, make them work for it a little bit," Mott said. "Our horse was just there. He got the rail trip. We thought when Mucho Gusto kind of went, you'd have thought he'd have come over to the fence but he stayed out, so that gave us the rail on the second turn. Hey, the winner came running."

Mott also saddled Elate, who ran second by a nose to Midnight Bisou two races prior in the Grade 1, $700,000 Personal Ensign presented by Lia Infiniti in a thrilling stretch-drive duel.

"The horses ran good. When the day is over, I don't think we really have any excuses," Mott said "My horses both were second, one by maybe a hair and the other was a good second. No excuses. Looking back, I don't know what else we could have done."

Michael Lund Petersen's Mucho Gusto, who ran second in the Grade 1 Haskell Invitational on July 20 at Monmouth Park, was jockey Joseph Talamo 's first Travers mount. The Bob Baffert trainee was 1 ¼ lengths the best of Endorsed for third. The horses comprising the trifecta were all trained by Hall of Famers.

"I was surprised to see Tacitus that close, but we were going pretty easy. I stayed out to where we were both going easy enough," Talamo said. "Turning for home, he really gave me a thrill when he opened up a little bit. I really thought I was going to keep going. Every start I've ridden him, he really lays it downs on them and that's all you can ask of a horse like him."