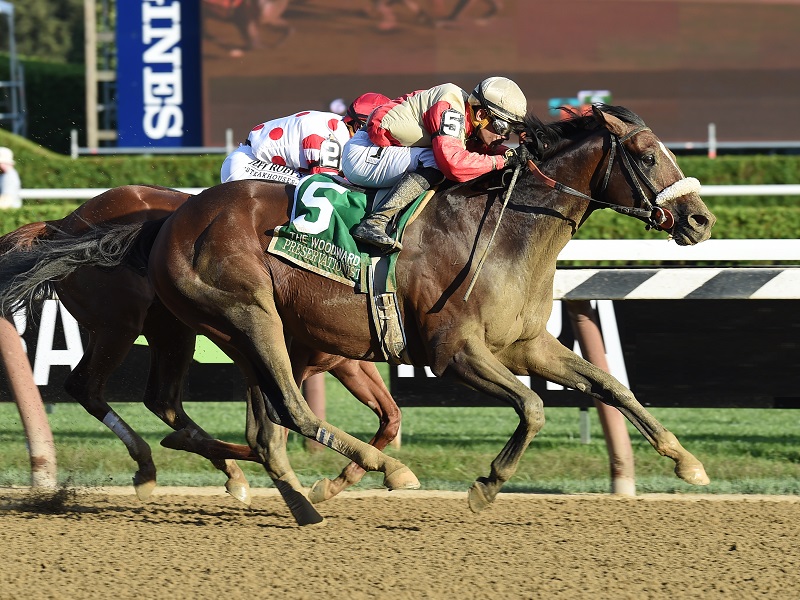 SARATOGA SPRINGS, N.Y. - Centennial Farms' Preservationist capitalized on an aggressive mid-stretch move from jockey Junior Alvarado, splitting rivals between Tom's d'Etat and Bal Harbour before kicking on for a half-length score in the Grade 1, $750,000 Woodward on Saturday at Saratoga Race Course.

The last of four graded stakes on the final Saturday of the summer meet, the Woodward's 66th renewal saw New York-bred Mr. Buff surge to the front, leading the eight-horse field of 3-year-olds and up through an opening quarter-mile in 23.98 seconds and the half in 47.97 on the fast main track with Preservationist tracking in third behind Bal Harbour.

Out of the final turn, 16-1 Bar Harbour took the lead in a tightly packed field, with Preservationist still near the inside. Inside the eighth pole, Alvarado tipped out Preservationist slightly when a seam opened, allowing the Jimmy Jerkens trainee to overtake Tom's d'Etat from his outside and Bal Harbour, ridden by Hall of Famer Javier Castellano, to his inside. Defending Woodward-winner Yoshida made a late bid from the outside, but Preservationist held strong to the wire, completing 1 1/8 miles in a 1:48.11 final time.

Alvarado, who rode Preservationist to a fourth-place finish in the Grade 1 Whitney earlier in the month at Saratoga, earned his first career Woodward victory.

"I had a great trip. I tried to find my way through and have something turning for home, but it was hard," Alvarado said. "Javier had some horse turning for home and I wanted to follow him but I know he didn't want to move because then I would be in the clear. So, he tried to hold me there as long as he could. Turning for home, I had some run in between horses. They made it a little bit tight for me there, but at that point, I thought I had it."

Off at 3-1, Preservationist returned $8.10 on a $2 win wager. The 6-year-old son of Arch won for the fourth time in five starts, including a 4 ½-length victory in the Grade 2 Suburban on July 6 at Belmont Park, and gave Jerkens his second career Woodward win [Shaman Ghost, 2016].

"It was a nice, even race from him. Perfect for the kind of horse that he is - even paced," Jerkens said. "He's got a good cruising speed, but it looked like he was just galloping. When he gets into a nice rhythm like that, he's going to run his race. Junior was able to switch him to his outside lead and I thought he really took over after that. I didn't think he was going to get there at first, but when one of the horses started to fade and it began to open up a little bit, I was pretty confident after that."

Preservationist improved to 6-1-2 in 10 career starts and earned millionaire status with the victory, bringing his career bankroll to $1,037,300.

"He was a little more settled today than when he was in the Whitney. I thought he was much better in the post parade," Jerkens said. "He was able to stay with the pony. Last time, he wasted a lot of energy. He's been doing well since that last race in his workouts and his whole demeanor. Physically, I thought he looked terrific."

"I'm sure we'll take a look at the Jockey Club Gold Cup, but he's run pretty close together his last three starts," Jerkens said." Obviously, the year-end goal you have to look at the Breeders' Cup Classic as to where we want to be. We'll come up with a plan to get there ready."

Red Oak Stable's Bal Harbour, conditioned by Todd Pletcher, finished a half-length ahead of 2-1 favorite Yoshida, trained by Hall of Famer Bill Mott, for second. It was the third consecutive runner-up effort in a graded stakes for the 4-year-old Bal Harbour, who also earned blacktype in the Grade 3 Monmouth Cup in July and the Grade 3 Philip H. Iselin in June at Monmouth Park.

"You never know in these types of races. They're all good horses," Castellano said. "I think my horse belonged in this race and I'm so happy with how he did things today. We broke well out of the gate and got a good spot in the race. I'm happy with how he did it every single step of the way. He put up a good fight."

Yoshida, who ran second in the Whitney, again finished on the board, three-quarters of a length clear of Tom's d'Etat.

"We were a little bit further out than I wanted to be," Yoshida jockey Joel Rosario said. "He ran his race. He came over and I thought we were going to get there. The pace just wasn't as fast up front."

Rounding out the field was Mongolian Groom, Wooderson, Mr. Buff and Forewarned. Vino Rosso was scratched.