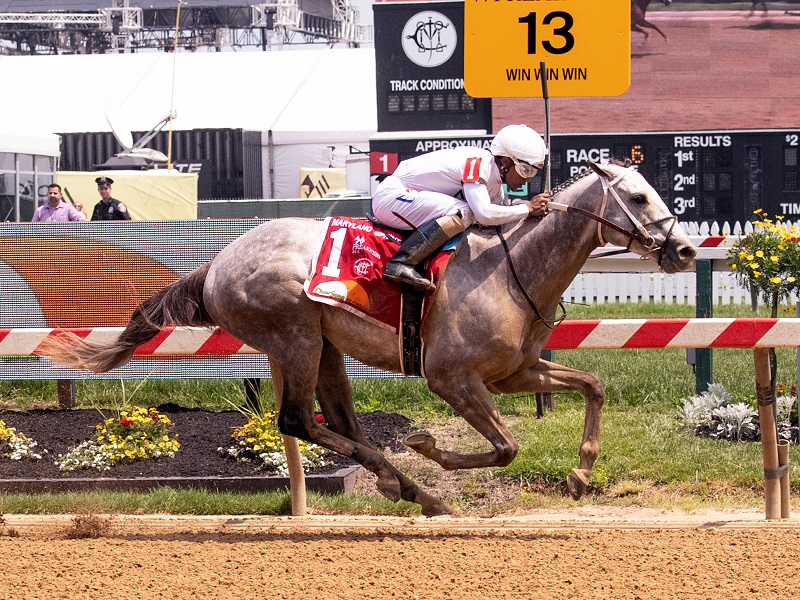 The 28th running of the six-furlong De Francis for sprinters 3 and up highlights eight stakes worth $1.3 million purses during Round 1 of September to Remember Stakes Festival that also features the return of Grade 1 winner Glorious Empire in the $200,000 Baltimore-Washington International Turf Cup (G3).

Five other stakes will also be contested over Laurel’s world-class turf course – the $200,000 Fasig-Tipton Laurel Futurity and $200,000 Selima for 2-year-olds; $150,000 Bald Eagle Derby presented by B&B Commercial Interiors for 3-year-olds going 1 ½ miles; and $100,000 Laurel Dash presented by Fidelity First and Blackwell Real Estate and $100,000 Sensible Lady Turf Dash, each 5 ½-furlong sprints for 3-year-olds and up.

Completing the stakes action is the inaugural $100,000 Warrior’s Reward Weather Vane for 3-year-old fillies sprinting six furlongs on the main track. Laurel will open its doors at 11 a.m. with a first-race post time of 12:25 p.m. The De Francis is carded as Race 8 of 12 with a 4 p.m. post.

Named for the late president and chairman of both Laurel Park and Pimlico Race Course, and not run in 2008 or 2010, the De Francis’ illustrious roster of past winners includes Hall of Famer Housebuster, fellow sprint champions Cherokee Run, Smoke Glacken, Thor’s Echo and Benny the Bull, and Lite the Fuse, the race’s only two-time winner (1995-96).

Hall of Fame trainer Steve Asmussen and Laurel-based jockey Feargal Lynch teamed up to win last year’s De Francis with Switzerland, and they unite again this year with New York Central. In his only previous visit to Maryland, the 4-year-old Tapit colt was a 1 ¾-length winner of the six-furlong Maryland Sprint (G3) on the Preakness (G1) undercard May 18 at Pimlico in a stakes-record 1:08.74.

“He’s had a little freshening after his last race and he’s done well,” WinStar President and CEO Elliott Walden said. “He’s training well and he’s coming back to Maryland, where he had his best day this year. We’re looking forward to it.”

New York Central followed the Maryland Sprint finishing last of seven in the seven-furlong John A. Nerud (G2) July 6 at Belmont Park, just the third time in 10 lifetime starts he ran worse than third. He has worked three times this month over Saratoga’s training track, most recently going a half-mile in 49.14 seconds Monday, ranking fifth of 21 horses.

“It was really hot the day he ran in New York and he was kind of down on the inside and didn’t really get into a rhythm to run his race,” Walden said. “He’s always been a talented horse. We just felt the race at Pimlico was tailor-made for him. [Jockey] Ricardo [Santana Jr.] gave him a super ride, and hopefully he’ll get a good, stalking trip again and have similar results on Saturday.”

Sagamore Farm’s He Hate Me can become just the fourth Maryland-bred to win the De Francis following Northern Wolf (1990), Smoke Glacken (1997) and Action Andy (2012). Sagamore, the historic Glyndon, Md. racing and breeding operation founded in 1925 and owned by Alfred G. Vanderbilt from 1933-86, and trainer Stanley Hough are each looking for their first De Francis victory.

“We’re thrilled to be able to run in this race. It’s what you work for, especially working with Sagamore. Whatever we can do in Maryland is great,” Hough said. “I think He Hate Me will run a good race. We hope to make Sagamore proud.”

He Hate Me won his only two starts as a juvenile in 2017 capped by the Tremont Stakes at Belmont. His career since has been interrupted by injuries and absences, but he has put together a solid 2019 campaign of two wins, two seconds and a third in six starts, one more than he had in his first two racing seasons combined.

“He was a nice 2-year-old that showed a lot of promise. He had to have knee surgery and came back and had another little problem. But now as a 4-year-old he seems to be coming around again, so I think he’s come into form pretty well,” Hough said. “He’s a very honest horse. I think he’ll be a nice 5-year-old. I only plan to run him a time or two more this year and then give him a little break and look forward to next year.”

He Hate Me, by Algorithms, is two-for-five lifetime at six furlongs, winning an optional claiming allowance by 2 ¼ lengths July 19 and running second by less than a length to Bon Raison in the Tale of the Cat Stakes Aug. 9, both at Saratoga. In his only career try at Laurel, he was fourth behind Still Having Fun in the 2018 Miracle Wood.

“He’s been running good. He ran great last time at Saratoga. He got off a step slow and then kind of rushed up there. I thought he might have been the best horse that day,” Hough said. “He’s a little more comfortable tracking horses and making a little run. That seems to be where he’s at his best.”

Bon Raison, owned and now trained by Peter Tournas, will be making his 31st career start and sixth in graded company in the De Francis. Claimed last summer at Saratoga, the 4-year-old has gone on to win a pair of stakes including the 6 ½-furlong Peeping Tom in March at Aqueduct.

Fifth behind win machine Mitole in the Forego (G1) Aug. 24 at Saratoga, Bon Raison comes back 17 days after rallying from well back to be second by a half-length in the Bensalem Stakes Sept. 2 at Parx.

“He’s one of those horses that you get blessed with once in a while that enjoys being on the track running more than he does sitting in the stall resting. He kind of needs to be out there,” Tournas said. “He wants it. If you ever see him out in the paddock, he’s just happy to be running, happy to be competing.

“He loves to run and if we can get the right races for him, we love to run him,” he added. “This seems like it’s a good fit for him. I’d love to see how he does down that long Laurel stretch. I think this is a good place for him to run.”

Nancy Lavrich and Ronald Zielinski’s Altissimo is a 16-time winner from 37 lifetime races, including eight stakes wins, the most recent coming in the July 13 Hockessin at Delaware Park. The Ohio-bred son of Noble Causeway returned to his home base to run second in the Honey Jay Stakes Aug. 10 at Thistledown last time out.

Altissimo, which means “highest” in Italian, has raced once over Laurel’s main track, beaten a head when second to Colonel Sharp in the six-furlong Dave’s Friend last December. Regular rider Christian Pilares comes in for the mount.

“He just seems to have that natural ability. Everything he’s done so far, he’s done easily,” trainer Richard Zielinski said. “I really think he’s a better horse if he can come from off the pace.  He’s a little bit of a temperamental kind of horse and the groom that takes care of him I think really got in his head and figured him out, how to make him happy and it’s worked.”

Completing the De Francis field are Killybegs Captain, winner of the Pelican Stakes Feb. 16 who ran third in both the Forego and Nerud and fourth in the Tale of the Cat; Wonderful Light, a winner of two straight since finishing second in the five-furlong Rumson Stakes July 4 at Monmouth Park; Laurel-based Old Time Revival, whose three career wins have come in 13 tries over his home track; and stakes-placed Sparticle, racing first off the claim for trainer Carl O’Callaghan.