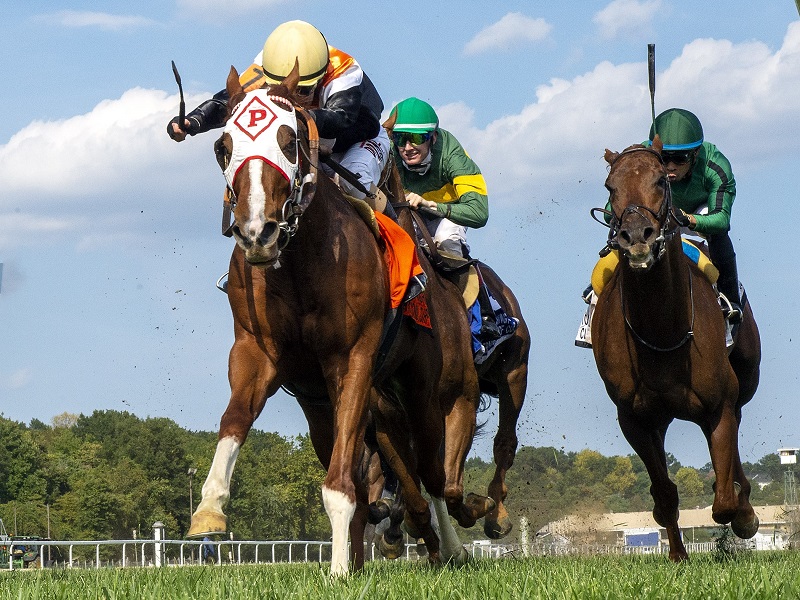 The Baltimore/Washington International Turf Cup, a mile turf stakes for 3-year-olds and up, was one of eight stakes worth $1.3 million in purses on the September to Remember program that featured the $300,000 Frank J. De Francis Memorial Dash (G3).

Caribou Club, who captured the 2016 Laurel Futurity, was reserved off a solid early pace set by Macagone, who set fractions of 23.57 and 46.39 for the first half-mile, pressed by Grade 1 winner Glorious Empire, the 5-2 favorite who was making his first start of the year.

Macagone and Glorious Empire continued to show the way on the turn into the homestretch while Caribou Club loomed boldly while making a sweeping move under Feargal Lynch. Caribou Club, the 7-2 second choice, continued his outside drive through the stretch and got to the wire first, a head in front of Frontier Market, who rallied from last under Julian Pimentel. Collum Road closed well to finish third under Alex Cintron, a half-length farther back.

“There was a lot of speed in the race with the Jason Servis horse [Macagone] in it. He set a very fast track record last time out at Saratoga so there was going to be a lot of speed in there with the outside horse coming back, as well, Glorious Empire. We just decided to take our time,” Lynch said. “He’s a nice horse and he’s got a good turn of foot. He’s very adaptable. He won going 6 ½ downhill at Santa Anita and he won a mile going around here. He’s a cool little horse.”

Caribou Club won the Henry Clark at Laurel on his way to a banner 2018 season. The son of City Zip concluded that campaign with a victory in the Seabiscuit Handicap (G2) at Del Mar, before kicking off the 2019 season with a triumph in the Joe Hernandez (G3) to earn a trip to Dubai. The 5-year-old gelding was never a factor in the Al Quoz at Meydan in March. Following a three-month layoff, Caribou Club finished fifth in the Highlander (G1) at Woodbine before breaking through with a win in the West Virginia House of Delegates Speaker’s Cup last time out.

“He loves it here. I think he broke his maiden here and won his first stake here. He’s a cool horse. He’d been doing well in California,” Lynch said. “He went to Dubai this year and Dubai is a tough place to go. It’s a straight five furlongs and they don’t get a chance to get a breather; they jump and go.”

Glorious Empire, who underwent therapy on a suspensory issue after winning the Fort Lauderdale (G2) at Gulfstream in December, faded to sixth, while Macagone tired to last in the field of seven.