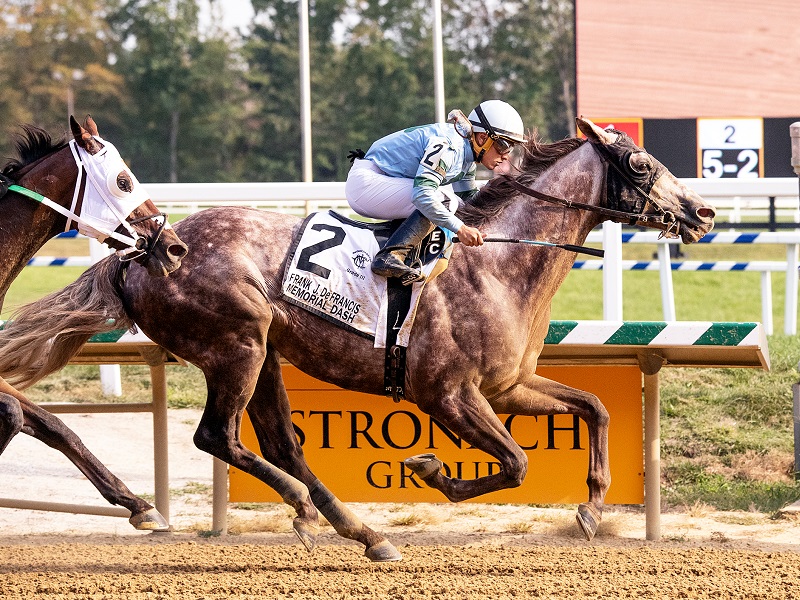 Given the call on Curragh Stables’ Killybegs Captain, a horse he rode to a pair of third-place finishes in graded-stakes earlier this summer for trainer John Terranova, Cancel followed his orders perfectly.

Settled in behind runaway pacesetter Old Time Revival for more than a half-mile, Killybegs Captain ($7.80) came with a steady run once straightened for home and fought off multiple stakes winner Altissimo for a three-quarter-length victory in the De Francis.

The 28th running of the six-furlong De Francis for 3-year-olds and up served to highlight Round 1 of Laurel’s September to Remember Stakes Festival featuring eight stakes worth $1.3 million in purses, including Caribou Club’s victory in the $200,000 Baltimore-Washington International Turf Cup (G3).

Named for the late president and chairman of both Laurel Park and Pimlico Race Course, the De Francis’ roster of past winners includes Hall of Famer Housebuster, fellow sprint champions Cherokee Run, Smoke Glacken, Thor’s Echo and Benny the Bull, and Lite the Fuse, the race’s only two-time winner (1995-96).

It was the second career stakes win for Killybegs Captain, following the six-furlong Pelican Feb. 16 at Tampa Bay Downs, and first in graded company. He was third in the John A. Nerud (G2) July 6 at Belmont Park and the Forego (G1) Aug. 24 at Saratoga, both contested at seven furlongs.

“John didn’t tell me really any instructions because I’ve ridden the horse a few times already. I’ve gotten to know him pretty well,” New York-based Cancel said. “He just told me to ride him with a lot of confidence and to bring home the winner and, thank God, he made it possible.

“I had a lot of confidence. The horse has been training very good,” he added. “I’ve been watching him work in the mornings and he’s been running his last few races super good. He’s in very good shape. I never had a doubt that he could win this race.”

Old Time Revival was intent on the lead from his outside post position and held it through fractions of 21.74 and 44.37 seconds, tracked by Altissimo, an eight-time Ohio-bred stakes winner. Killybegs Captain saved ground early and moved into a contending position on the turn, made a bid between rivals to take command nearing the eighth pole, and dig in when challenged by Altissimo on his outside.

Altissimo was a decisive second, 3 1/4 lengths ahead of 6-5 favorite He Hate Me. It was two lengths back to program favorite and 2019 Maryland Sprint (G3) winner New York Central in fourth, followed by Bon Raison and Old Time Revival. Wonderful Light and Sparticle were scratched.

“The horse, sometimes he has his good breaks and sometimes he has his bad. Today, he broke pretty decent. I put him in the spot that I really wanted to be, laying close third or fourth, and once I asked him to run he just started going and never hesitated. I took advantage and it worked out very well.”