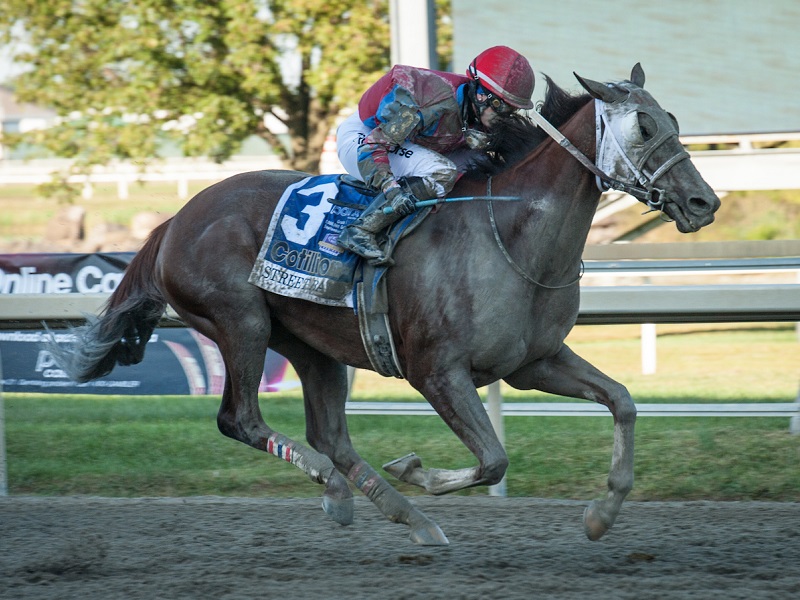 Bensalem, Pa. – Street Band circled a field of one of the strongest groupings of 3-year-old fillies assembled in 2019 to win Saturday’s $1 million Cotillion Stakes at Parx Racing, earning Sophie Doyle her first Grade 1 victory and securing an automatic berth in the Breeders’ Cup Distaff.

The Larry Jones-trained Street Band, making her seventh start this year and sent off at 7-1 in the field of 11, tracked the field from the back of the pack early while Jaywalk set a quick opening quarter-mile in :22.75. The field progressed through a half in :46.27 and 6 furlongs in 1:11.19 as Bellafina took command.

“I was very glad to hear (Parx announcer Keith Jones) say ‘very fast quarter’ because we were way back,” Jones said. “We knew there was a lot of speed in here and I was waiting to see those fractions and he called it. By the time I could locate her he already said ‘very fast’ so I said, ‘ok, we’re still alive.’ “When she was moving that strong, and I know Sophie doesn’t ask that hard that early, when she was going by horses that fast I thought that when we were heading for home, we were going to be close.”

Turning for home Street Band was under a strong drive from Doyle with Guarana to her inside. Street Band took the lead in deep stretch by a head after a mile in 1:37.44, holding off Guarana by 2 1/4 lengths at the finish.

“I was feeling good right here (into the stretch),” said Jones. “When she was going by horses, she was running. We knew there was a lot of speed and we could let her run the whole way without taking her back. When I saw her come by last, I felt, ‘Boy, Sophie, you took her back pretty good.’ She had been relaxing in her works, it has been something we had been trying to do. Sophie told me she thought we had her where we wanted her. And I told her, if she doesn’t win, it’s her fault!”

Doyle, the former top female apprentice rider in her native England in 2010, moved her tack to the U.S. in 2011. She couldn’t contain her enthusiasm for her breakthrough win and the filly’s trip.

“Honestly my trip, I had to go to Plan B and C,” Doyle said. “She was a little worked up in the post parade. When she broke away from the gate I said, ‘you know what, there’s so much speed in here, I’m not going to rush her off her feet.’ I let her carry me into the race. I let her creep into the race in her own time. “When we were coming around the home turn I was like, ‘come on girl, let’s get into it.’ She really exploded for me. She gave me everything she’s got. She never gave up. She’s so tough. What an amazing filly. She’s come out here today and really proved how good she is. She deserves to be at these Grade 1 races. My first Grade 1. I’m absolutely over the moon. It’s fantastic. What an amazing opportunity. Fingers crossed now to the big one and the Breeders’ Cup.”

Doyle became the third female to win the Cotillion since its inception in 1969, after Andrea Seefeldt won in 1992 with Star Minister and Rosie Napravnik piloted Untapable to victory in 2014.

The Kentucky-bred Street Band entered off a third in the slop in the Grade 1 Alabama Stakes Aug. 17 at Saratoga. The Istan filly split rivals to win the Grade 3 Indiana Oaks at Indiana Grand in her prior race, which followed her seventh in the Grade 1 Kentucky Oaks May 4 at Churchill Downs.

Guarana, perfect through three career starts after being unraced at 2, won the Grade 1 Acorn by 6 lengths before adding the Grade 1 Coaching Club American Oaks to her resume for trainer Chad Brown.

“She got a pretty good trip,” Brown said. “I thought she was sitting real nice and she was close to a real honest pace. We had everyone where we wanted them. She was just second best. She just won a Grade 1 going two turns so I can’t blame that (the distance). Is she best around one? Probably. I can’t make any excuse. We gave her a little breather since the Coaching Club and maybe she was a little short as well. New track, too. But hats off to the winner. She really ran well. Both fillies did.”

Owned by her trainer, Cindy Jones, Ray Francis, Medallion Racing and MyRaceHorse Stable, Street Band earned her trip to the Nov. 2 Distaff at Santa Anita Park through the Breeders' Cup Challenge “Win and You’re In” series.