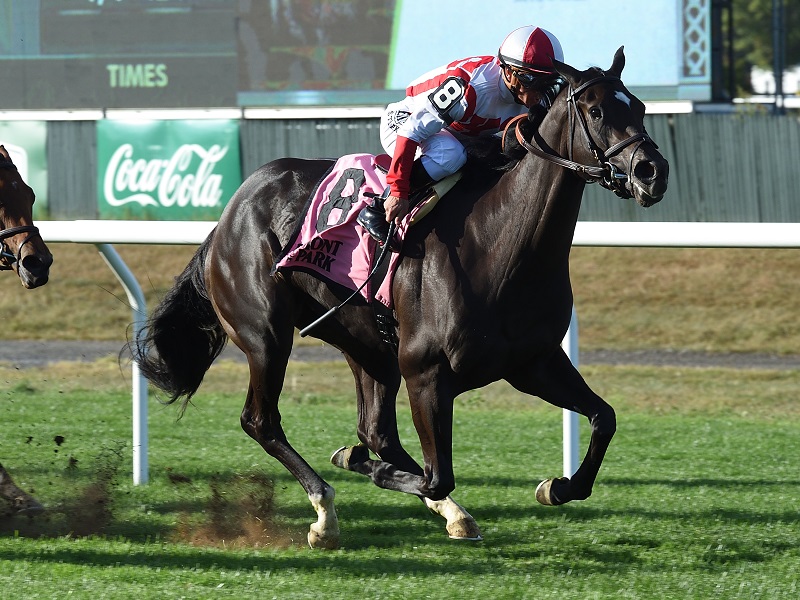 ELMONT, N.Y. - Selflessly stalked a moderate pace and made a winning move at the top of the stretch to give trainer Chad Brown a fourth straight victory in Sunday's Grade 2, $200,000 Miss Grillo over a firm inner turf at Belmont Park.

Owned by Klaravich Stables, the dark bay daughter of More Than Ready arrived at the 1 1/16-mile event for 2-year-old fillies as a maiden with only one start under her belt, which was a narrow runner-up effort to stablemate and fellow Miss Grillo aspirant Jazzique in a 5 ½-furlong maiden event over the Saratoga turf.

Breaking from the outside post in a field of eight under Hall of Famer Javier Castellano, Selflessly was fourth early as Ava K's Girl marked the opening quarter-mile in a leisurely 24.47 seconds with 73-1 longshot Wicked Title just to her outside.

Wicked Title took command through a half-mile in 48.84 seconds as Ava K's Girl began backpedaling into second while Selflessly moved up into third.

Selflessly moved three-wide approaching the far turn as Wicked Title began to retreat and opened up a length advantage at the stretch call with Jazzique advancing inside in second position. With an eighth of a mile remaining, Selflessly shook away from Jazzique and held off a late charge from P.G. Johnson winner Crystalle to win by three-quarters of a length in a final time of 1:42.32. It was another three-quarters of a length back to Jazzique in third.

Rounding out the order of finish were Sparkling Sky, English Breeze, My Sassy Sarah, Wicked Title and Ava K's Girl.

Castellano said he was expecting a strong effort from Selflessly.

"She did well. I had high expectations for her. She went 5 ½ [furlongs] the first time and I don't think that's the right distance for her," said Castellano, who scored his third Miss Grillo triumph. "Today, we stretched her out to a mile and a sixteenth, and I think she was in a more comfortable rhythm. I didn't have to hustle her too much. I liked the way she did it today. Very professional; she has a great mind and great body. I think she's a horse that's Breeders' Cup [caliber]. She can handle it. She's well-bred and has a great trainer in Chad Brown. I was very fortunate to be in this spot."

"I think stretching out and the experience from that first start were the keys here. She ran a really good race on debut and was unlucky not to win," Brown said. "She galloped out well in the race and she has really done everything right since her debut. With these 2-year-olds, we get them started when they're ready and let them come along at their own pace. She came into this race really training well, and I just treated the debut as if she won."

Selflessly is not nominated to the Grade 1, $1 million Breeders' Cup Juvenile Fillies Turf on November 1 at Santa Anita, but Brown said the filly would likely be supplemented to the event.

"I think so. We'll talk to the owner about it, but if she comes out of the race sound and doing well I'd be inclined to go," Brown said.

John Kimmel, trainer of beaten favorite Crystalle, said the lack of early speed impacted his filly's chances as she rallied from last of eight after three-quarters in 1:13.46.

"The slow pace didn't help," Kimmel said. "She was so relaxed coming out of there and with a couple horses coming out of sprint races, you would think that the pace would have been a little quicker than what it ended up being. But, for her to close into three-quarters in 1:13 and change, was impressive."

Kimmel said that the newly-implemented Turf Tiara series for sophomore grass fillies would be a long term goal for Crystalle in 2020 and that she would ship to Santa Anita for the Breeders' Cup.

"Another two jumps and she would have been in front everybody. Not only that, she had to give up some distance. I'm disappointed we didn't win the race, but I'm certainly not disappointed in the filly," Kimmel said. "Regardless of what she does at the Breeders' Cup going a mile, I think she has tremendous potential for next year. She looks like a filly that settles beautifully and will be able to run a mile and a quarter and be a factor in those nice Turf Tiara races."

Bred in Maryland by George Louis Doetsch, Jr., Selflessly is out of the Grand Slam broodmare Uniformly Yours, who also produced two-time stakes winner Enchanted Ghost. She was a $190,000 purchase from the 2017 Keeneland November Sale.

Live racing resumes on Wednesday at Belmont with an eight-race card. First post is 1:15 p.m. Eastern.