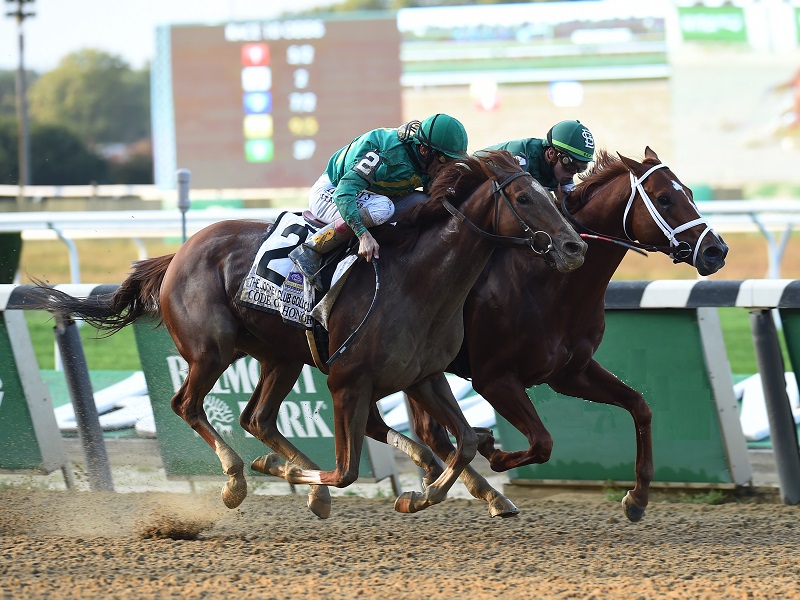 ELMONT, N.Y. - W.S. Farish's Code of Honor was once again part of a dramatic ending that saw a stewards decision change the final order of finish in a prestigious Grade 1, hitting the wire second to Vino Rosso by a nose before the stewards elevated him to first due to interference in the stretch run in Saturday's 101st running of the $750,000 Jockey Club Gold Cup at Belmont Park.

Code of Honor, who won the Grade 1 Runhappy Travers last month at Saratoga Race Course, posted his fourth victory in seven starts in his 3-year-old campaign and thrived in his first start against older horses, bolstering his case for top sophomore status in earning an all-fees paid trip to the Grade 1, $6 million Breeders' Cup Classic on November 2 at Santa Anita Park.

Off at 2-1, the trainee of Hall of Famer Shug McGaughey stayed off the lead as 2018 Grade 2 Wood Memorial-winner Vino Rosso led the five-horse field through the opening quarter-mile in 24.02 seconds, the half in 47.73 and three-quarters in 1:11.63 on the fast main track with Code of Honor covered in fourth.

Jockey Irad Ortiz, Jr. kept Vino Rosso near the rail out of the final turn, with Code of Honor gaining ground under Hall of Famer John Velazquez from the outside. The duo linked up in the stretch, with the rivals going eye-to-eye in the final furlong. Ortiz moved Vino Rosso out from the rail, bumping Code of Honor multiple times as the pair arrived at the wire in a final time of 2:00.30 for the 1 ¼-mile route.

But the stewards disqualified Vino Rosso from first to second, elevating Code of Honor to first. In May, Code of Honor finished third in the Grade 1 Kentucky Derby at Churchill Downs but was elevated to second behind Country House when Maximum Security, who had crossed the wire first, was disqualified for interference.

"I thought maybe Johnny had to move a little sooner than he wanted to just because Tacitus and Preservationist weren't able to put the pressure on Vino Rosso." McGaughey said. "I thought we had him at every jump and he [Vino Rosso] kind of came out. I knew he had come out, but I didn't know they bumped because my view was watching sideways. When I saw the head on, then they threw the objection and inquiry, I thought there was a good chance they'd make a change. Johnny told me they got us twice pretty good."

"It was a perfect trip, no complaints at all. Just when we got to the eighth pole, he bumped me a little bit, just enough to get my horse off balance."

McGaughey won his third career Jockey Club Gold Cup and first in 26 years, adding to his first with Hall of Famer Easy Goer in 1989 and Miner's Mark in 1993.

"This horse is a pretty good horse now," McGaughey said. "He's made so much improvement since the [Kentucky] Derby. I couldn't be any prouder of him than I am."

The Noble Mission colt improved to 5-2-1 in nine career starts and could have a chance to solidify his case for an Eclipse Award in the Breeders' Cup Classic, contested at the Jockey Club Gold Cup distance, against contenders for Horse of the Year honors.

"That's up in the air. This horse needs a little vacation but on the other hand, he comes out of his races well and that is certainly a possibility," said Farish on the possibility of running in the Classic. "I don't go after anybody, but this is a wonderful horse and he deserved it. I saw the pictures of it and it was definitely three bumps but bottom line, we're all very excited. It was a really meaningful win for us. We had our family here from all over the country and Shug is just a great, great friend, a wonderful trainer and he did a fabulous job with this horse. This is just fantastic."

Velazquez won the Jockey Club Gold Cup for the third time in five years, picked up victories in two of the day's four graded stakes, also piloting Midnight Bisou to victory in the Grade 2, $300,000 Beldame in Race 8.

"He's [Code Of Honor] been showing up the last three races. He's putting it together. I'm very proud of him. He's the top of the [3-year old) division now, I believe," said Velazquez, who broke Jerry Bailey's record of 660 career graded stakes wins on Friday at Santa Anita before flying back to New York.

St. Elias Stable and Repole Stable's Vino Rosso, trained by Todd Pletcher, entered off a third-place finish last out in the Grade 1 Whitney on August 3 at Saratoga.
"He fought hard. I was proud of the way he ran," Ortiz said.

Juddmonte Farms' Tacitus, who ran second to Code of Honor in the Runhappy Travers, earned blacktype for the fourth consecutive graded stakes race. The runner-up in the Grade 1 Belmont Stakes and the Grade 2 Jim Dandy finished one-length clear of Preservationist for third. Olympic Village completed the order of finish.

"He runs good every time. He shows up every time. There isn't one time he doesn't give it a try," Tacitus Hall of Fame trainer Bill Mott said.