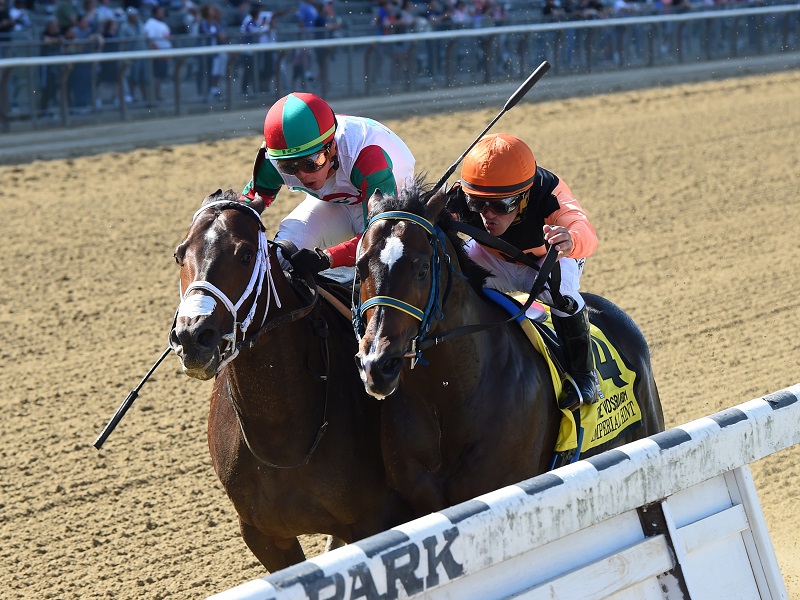 Breaking alertly from post 3 with Hall of Famer Javier Castellano aboard, the pair went to the front from the four-horse field, marking the opening quarter-mile in 22.11 seconds and the half in 44.65 with Firenze Fire stalking closely in second on the fast main track.

Firenze Fire, with Irad Ortiz, Jr. up, put a head in front at the stretch call but Imperial Hint battled back with the pair trading leads to the wire with Imperial Hint, under a vigorous ride by Castellano along the rail, putting a nose in front to complete six furlongs in 1:08.35.

Castellano was full of praise for the game and determined effort by Imperial Hint.

"It was unbelievable," said Castellano. "You never know in this game, nothing is for sure. You have to ride your race, and this is a great horse. I loved the way he did it. He fought all the way to the end. He didn't want to get beat. I give all credit to the horse and trainer, he did a great job. Now we have the Breeders' Cup and I'm looking forward to it."

With the scratch of pace presence Promises Fulfilled, Ortiz, Jr. said he wanted to pressure Imperial Hint early in the race.

"There was no speed in the race except the horse to beat, so I had to go for it," said Ortiz, Jr. "I took my horse out of his place too early. You don't want to do that, but I had to do it. I thought it was a little early to try and jump on him. It worked out good turning for home and at the three-sixteenths pole, but it didn't work out in the end. He [Imperial Hint] put his head in front."

Returning $2.50 for a $2 win wager, the 6-year-old son of Imperialism bred in Florida by Shade Tree Thoroughbreds boosted his earnings to $2,199,155. It was the second consecutive win from four starts this year for Imperial Hint following an impressive four-length victory in the Grade 1 Alfred G. Vanderbilt on July 27 at Saratoga in which he set a track record.

Looking ahead, Carvajal, Jr. said Imperial Hint would return to his home base at Monmouth Park, where he will begin final preparations for the Breeders' Cup Sprint.

"We'll go back to Monmouth Park and evaluate the horse and make sure he's good," said Carvajal, Jr. "We'll resume training and hopefully we'll see him at Santa Anita and leave in the middle of October or something like that. You don't have to do much now after this race. This will be enough."