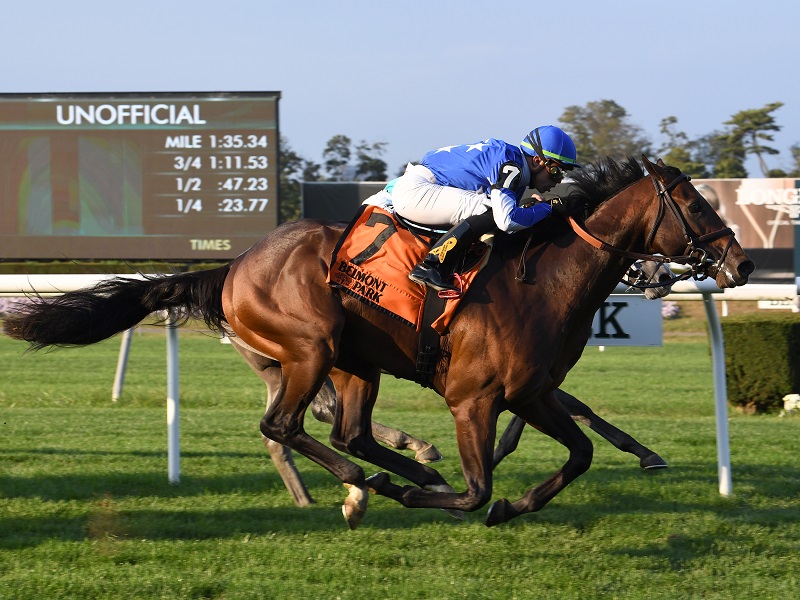 Conditioned by three-time Eclipse Award-winner Chad Brown, Structor settled comfortably in fifth position in the 1 1/16-mile test for juveniles as Tuggle marked the opening quarter-mile in 23.77 seconds on a firm Widener turf course.

Tuggle, under pressure from Maxwell Esquire, led the field of nine down the backstretch as Structor inched into fourth position outside of Andesite and No Lime. No Word, the 2-1 mutuel favorite, advanced inside rivals to fifth as Tuggle reached the half-mile in 47.23.

Ortiz, Jr. urged Structor into contention into the turn, traveling three-wide, as No Word and Andesite took an inside route into the stretch run. Structor enjoyed a one-length lead at the stretch call as Andesite zipped up the rail and angled outside of Maxwell Esquire for the stretch run. A determined Structor was kept to task to the wire to prevail over a surging Andesite by 1:41.46.

Our Country, last-of-nine through three-quarters, arrived late to complete the trifecta. Rounding out the order of finish were Famished, No Word, Maxwell Esquire, No Lime, The Gray Blur and Tuggle.

Ortiz was pleased with the trip he engineered for Structor.

"I was proud of this horse [knowing] how wide he had to travel the whole way. No fault of the jockey, just his post and the way some horses wedged their way in there early. He gutted it out," said Brown. "This was a solid pace, 47 [seconds] and change traveling three deep into the turn. To have enough to gut it out, I think he wouldn't mind a cutback to a mile at all in the Breeders' Cup. He's an improving horse."

Bred in Kentucky by Three Chimneys Farm, Structor banked $110,000 in victory while remaining undefeated in two starts. He paid $7 for a $2 win ticket.