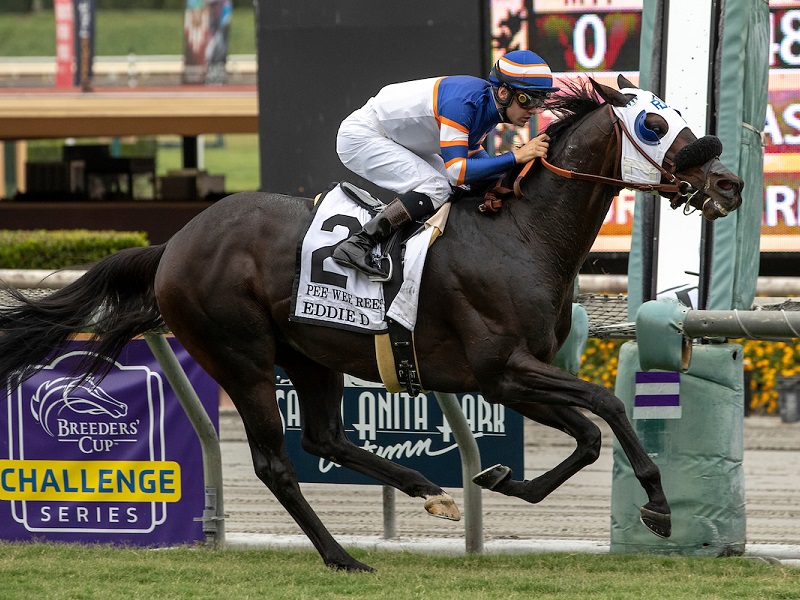 ARCADIA, Calif. (Sept. 27, 2019) — Full of run while an attentive third around the far turn, Nick Alexander’s homebred Pee Wee Reese slipped through an opening turning for home en route to an impressive half length win over favored Eddie Haskell in Friday’s Grade III, $200,000 Eddie D Stakes at Santa Anita. Ridden for the first time by Flavien Prat and trained by Phil D’Amato, Pee Wee Reese, named for the late Dodger Hall of Fame shortstop, got five furlongs on turf in 55.33, just .27 seconds off the track record set by Eddie Haskell on Feb. 22.

Breaking sharply from post position two, Prat was content to let his mount run into the bridle as he tracked early leader Boa Nova into and around the turn and easily prevailed late over the runner-up.

Ridden by Joel Rosario, Eddie Haskell was next to last turning for home and made a big run while wide out, finishing 1 ¼ lengths in front of two-time Breeder’s Cup Turf Sprint winner and last year’s Eddie D victor, Stormy Liberal.  Off at 9-5, Eddie Haskell paid $3.00 and $2.20.

Stormy Liberal, who was ridden by Norberto Arroyo, Jr., never threatened for the win but was game for the show at 6-1 and paid $3.40.

FLAVIEN PRAT, PEE WEE REESE, WINNER: “We had a good trip. He broke well and there were two horses that were off quicker than us, so we sort of sat in behind them. When we had the opening in the stretch, he gave me a good kick.

JOEL ROSARIO, EDDIE HASKELL, SECOND: “Yeah, he did (finish well). He tried really hard, just got beat by another fast horse. Second best, but he pulled his own.”
(On the future for Eddie Haskell) “He tried really hard, and he’s a good horse, so we’ll see where they will go next”.

PHILIP D’AMATO, PEE WEE REESE, WINNER: “Flavien had it in mind to stay at the back coming out of the jock’s room so I told him to play the break; to go suicidal in 21 is never a good thing, so I just told him to do what he thought was best and he got him in a nice spot in the pocket, found a hole there at the top of the lane and exploded through.

“For turf horses, San Luis Rey Downs is a great place. They can get plenty fit down there and he really likes it there and he will probably go back down there.”

NICK ALEXANDER, EDDIE D, WINNER: “When you see the Cal-breds fall out and you see them broken, then see them at the track, you never know which is going to be a good and one which one is not. This guy was nothing special for his first couple races on the dirt, broke his maiden on the dirt just barely, and when we switched to the turf he was a different horse.

“Phil D’ Amato has done an unbelievable job with this horse. He has only run 14 times, he’s six years old, so in between races he’s really done a lot to help him.

“Pee Wee Reese was the captain of the Dodgers and he was the one who befriended Jackie (Robinson) when he was first with the Dodgers. Pee Wee was part of the solution to get everyone to play together…that is why I named the horse after him.